I am trying to show that the Hong-Ou-Mandel effect will not happen if the photons are not coherent. I am not sure where I am going wrong with my maths. I have tried to emulate the coherent case but allow for a phase difference however I still find the same result as in the coherent state. My work is as follows:

After the beam splitter each wavefunction is in a superposition of two possibilities, that the light was reflected or passed straight through. In the reflected case the phase is shifted by $\frac{\pi}{2}$. This gives:

The final state is obtained by a product of the two which gives:

Clearly the mixed states cancel out as in the coherent case. I know that this is wrong in the incoherent case but I can't see what I have done wrong to cause this. I assume it is something to do with how I accounted for the phase difference, since the multiplication to find the final state is what makes the $\theta$ suddenly apply to all states. Any help is much appreciated.

The Hong–Ou–Mandel effect can be described like this: Two photons enter a particular type of beamsplitter, one from each side. If the two photons are "identical" in the sense defined below, then the probability of detecting one photon on each side of the output is zero. Both photons will always be detected on the same side of the output, though we cannot predict which side.

The notation used in the OP is partly unclear to me, but one thing is clear: In a state with two photons, shifting one photon's phase by a constant $\theta$ cannot affect anything. It merely multiplies the two-photon state-vector by and overall factor of $\exp(i\theta)$. Physical predictions depend only on the ray (the one-dimensional Hilbert space spanned by the given state-vector), not on the individual state-vector, so multiplying the state-vector by $e^{i\theta}$ has no physical effect. (This is in contrast to the effect of a relative phase between two terms in a superposition.) This is restated below in mathematical notation.

The OP considered only plane waves, but the following calculation allows the two incoming photons to have arbitrary longitudinal profiles, described by complex-valued functions $f$ and $g$, respectively. The HOM effect occurs whenever $f\propto g$, which includes the case $f=e^{i\theta}g$ considered in the OP. I'll use the creation/annihilation operator formalism, because this makes the calculation easy and make the reason for the result very clear. 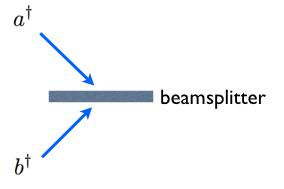 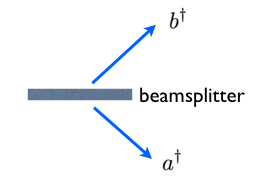 The factors of $i$ are necessary in order for the transformation to be both unitary and symmetric in $a$ and $b$. That's important, because the HOM effect relies on these factors of $i$.

(The WP article linked in the OP uses a different unitary transformation that doesn't have factors of $i$ and is not manifestly symmetric in $a$ and $b$. That transformation can be converted into this one by absorbing a factor of $i$ into either $a$ or $b$, which doesn't affect the commutation relations. And as ZeroTheHero indicated in a comment, (4) is not the most general form for a 50:50 beamsplitter, but it is sufficient for the present purposes.)

In the special case $f\propto g$, a glance at the result (6) shows that the $ab$ and $ba$ terms cancel each other. This is the HOM effect. The relative minus sign between these two terms comes from $i^2=-1$. The linked WP article words it this way:

The Hong–Ou–Mandel effect ... occurs when two identical single-photon waves enter a 1:1 beam splitter, one in each input port. When the photons are identical, they will extinguish each other. If they become more distinguishable, the probability of detection will increase.

That wording is unclear. Here's the decoder ring:

The OP considers the case $f=e^{i\theta}g\propto g$. The preceding calculation shows that the $ab$ and $ba$ terms cancel each other whenever $f\propto g$. This agrees with the conclusion of the OP's calculation.

What does "coherent" mean?

The most important point is that the result cannot depend on $\theta$, and this is already evident from the initial state (5), without calculating anything at all. The replacement $g\to e^{i\theta}g$ can't have any effect, because it merely multiplies the initial state-vector by an overall factor: $$ a^\dagger(f) b^\dagger(g)|0\rangle \to e^{i\theta}a^\dagger(f) b^\dagger(g)|0\rangle. \tag{7} $$ Physical predictions depend only on the ray (the one-dimensional Hilbert space spanned by the given state-vector), not on the individual state-vector.

There are a number of issues to resolve before one can give a fair answer. The first is the notation. It is confusing to equate a pure state with a function. Perhaps better to state $$ |\psi_{\text{in}}\rangle = |1\rangle_R |1\rangle_D $$ where $R$ and $D$ are the two input ports of a beam splitter, and $|1\rangle$ is a single-photon Fock state with a given wave function.

This brings us to the next issue. The wave function assumed by the OP is that of a plane wave with an amplitude $A$. Wave functions need to be normalized and plane waves cannot be normalized. However, this detail does not affect calculations. So one can simply assume that the amplitude includes some envelope function, which, for convenience, one can assume to be a Gaussian envelop. So the wave function is then defined as: $$ \langle \mathbf{r},t|1\rangle_R = A(\mathbf{r},t) \exp(i\mathbf{k}\cdot\mathbf{r}-i\omega t) , $$ where $|\mathbf{r},t\rangle$ represents a coordinate basis (not to be confused with the eigenstates of so some position operator).

Now we are ready to address the question: can two incoherent photons produce HOM interference? Note that the input state has photons in both input ports. This is necessary otherwise you won't see HOM interference, regardless of coherence. The OP modeled the incoherence by adding a phase to one of the plane waves $$ \langle \mathbf{r},t|1'\rangle_D = A(\mathbf{r},t) \exp(i\mathbf{k}\cdot\mathbf{r}-i\omega t + i\theta) , $$ This is not enough to give incoherence. Incoherence requires that there does not exist a fixed phase difference between the sources. We can model this by performing an ensemble average over all phase values $\theta$ after the calculations.

The fact that incoherent single-photon states do produce HOM interference has been seen experimentally many times in experiments of entanglement swapping, for instance.

As a final remark, it should be pointed out that indistinguishability is not required for a dip. One can have distinguishable photons and still get a dip, if the photons are prepared in a symmetric state $$ |\psi_{\text{in}}\rangle = \frac{1}{\sqrt{2}}(|1\rangle_R |1'\rangle_D+|1'\rangle_R |1\rangle_D) . $$ This follows by noting that the two terms that fill in the dip (produce coincidence counts) after the beam splitter are always in an anti-symmetric state.

"Coherence, a fixed relationship between the phase of waves in a beam of radiation of a single frequency. Two beams of light are coherent when the phase difference between their waves is constant; they are noncoherent if there is a random or changing phase relationship." https://www.britannica.com/science/coherence

So, you've set up a system where the two waves are out of phase by a constant amount, but are still coherent. Try again with each photon having a different frequency.

Not the answer you're looking for? Browse other questions tagged quantum-mechanics homework-and-exercises wavefunction interference coherence or ask your own question.