How can infinite density exist?

Thinking in mind, infinite density is where there is no space between particles correct me here if i'm wrong. Inside a blackhole at the core.
So if there are 2 particles touching each other 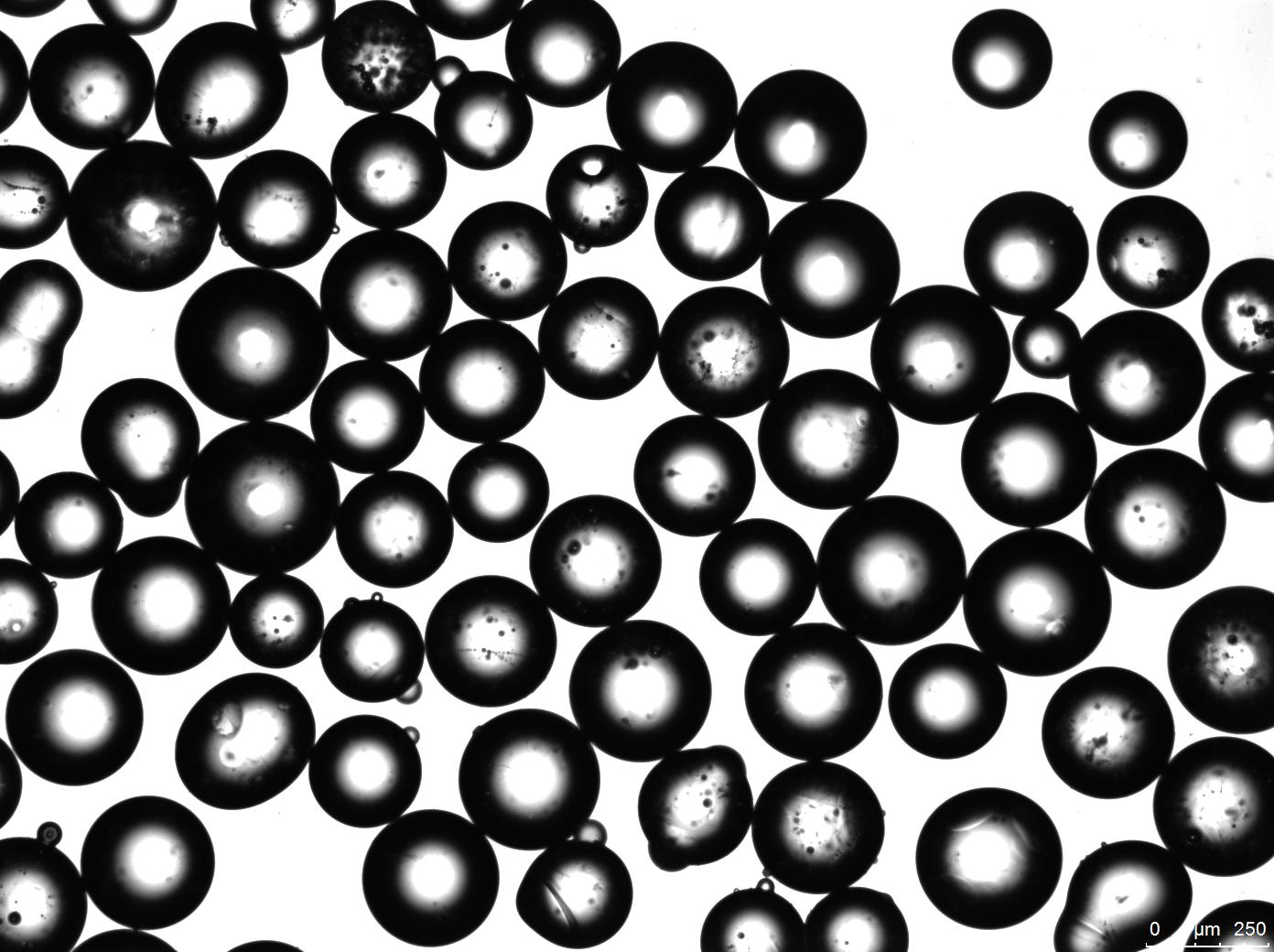 Then let there be a scale where we can scale the microscope's optics to see the size of quarks.
So then we are seeing there is space between 2 particles who are touching as they are zoomed to quarks where the particles are touching but not the quarks.
So lets make the quarks touch each other?
right? But then we can zoom even more to see that quarks are made up of something and technically they are not touching?

What i mean is can 2 particles ever touch each other without having space between them?.I'm new here correct me if i'm wrong

For example the 1/r infinity when positive is attracted to negative in classical electromagnetism , is replaced by Heisenberg's uncertainty principle, and/or by solutions of quantum mechanical equations where probabilities can be calculated. The spectrum of the hydrogen atom has been calculated with the 1/r potential in Schrodinger's equation, and there is no "touching" because there are no orbits, just energy levels and orbitals. Thus the classical density has no meaning in the underlying quantum mechanical level.

In the Big Bang cosmological model, effective quantizations has been assumed , to avoid the infinite densities of classical calculations.

Once gravity has been successfully quantized, the singularity at the center of a black hole will also become a probability locus where the classical term "density" has no meaning. (At the moment string theories quantize gravity and can embed the standard model of elementary particles, but no unique model has been found yet).

One needs to make very clear the epistemological status of what we know and do not regarding black holes. For one, we don't know that "infinite density singularities" actually exist within them. General relativity predicts this, but there is both no way to observe anything beyond a black hole's event horizon that we know of to be able to validate or invalidate this prediction, and moreover, there are good reasons to suspect general relativity fails at some point within the black hole. This may be near the expected singularity, but could also, potentially, be right at the horizon - because we can't observe past, any such scenario or anywhere in between could be entirely consistent with our existing corpus of experimental and observational data. In fact, there are some theories about what black holes "really" are which do, indeed, predict just such a failure at the horizon, such as the "fuzzball" concept from string theory.

So the answer to the question is "quite possibly, it doesn't, and here's a reason why". Though maybe it does - maybe things cease being made of separate particles and thus can go to size zero, that's logically imaginable - but there's no reason to believe that over that it doesn't. The ultimate answer will depend on being able to develop a theory of quantum gravity and black holes that we can test empirically in some fashion, and even then, unless it also gives us a loophole in which we can peer past the horizon, technically any truly direct confirmation or not of its predictions for the inner structure of black holes will not be possible. Nonetheless, if it's confirmed in every other spot, and it makes at least some sort of variant prediction for black holes that we also can test and confirm, then we could at least be pretty confident in what it says about the interior. After all, no science is certain knowledge. Yet also, that does not prevent us from becoming arbitrarily close to certainty, and thus why that well-established scientific knowledge cannot or should not be dismissed lightly and moreover why that in practical, common-sense, rubber-hits-the-road terms as to how to apply it in our lives and in human society, well-established scientific knowledge might as well be a certainty.

Infinite density singularities don't exist and even cosmology says as much. It functions in mathmatical modeling as a place holder TBD at a later date. That's all.

First of all, I would like to clarify some of the aspects of General Relativity discussed in the comments above:

General Relativity is one of the strongest and full theory we have for our universe for large scales. There is no doubt in the theory itself with respect to any experiment and you can read about experimental successes of it in normal and extreame conditions.

The reasons some of the people say that it is a incomplete theory are:

1) It pridicts existence of darkmatter: Physicists have hard time searching darkmatter and making theories of it. For now it is, atleast, confirmed that some sort of non-visible-matter(non-baryonic) aka darkmatter do exist and the general relativity with darkmatter works perfectly well.(For ref. you can watch this video: https://www.youtube.com/watch?v=iu7LDGhSi1A&index=15&list=LLgnMAGzIJCwNsEWIjmn8jig&t=0s)

(1) General relativity do pridict the existence of infinitely dense singularities at the center of the black holes ( and also at the big bang point). Questions like what happens at the singularity can't be ever fully realized alone with the general relativity, we need to include quantum effects, we need a QG theory which we don't have. So don't waste time on asking such quetion instead try to develope a quntum gravity theory by yourself if you are interested!

(2)We don't know anything about what a singularity in spacetime really is and what is the state of matter in it. We need a QG theory to know such answers. But we do know that it might not the quarks because we already have quark-stars in which all of matter is in the form of "ocean of quarks". We believe, from standard model, that quarks are fundamental particles. But if the String Theory is true then may be these singularities contains not any type of particles but strings itself, who knows!.

Before, the density is finite; after, the density is infinite. But there is a gap between the largest real number and the smallest infinite number, and there is no definitive mechanism to join the two.

Surreal numbers? This would be their first use in physics!

In my opinion, we are saved from infinities/infinitesimals by Planck length/area/volume, specifically the volume which I call the 'planckon'. After all, a BH has finite mass, and a region of infinite density would have to be infinitesimal. Planckons have a diameter ~Planck length' as close to infinitesimal as we're allowed to get.

Are 'planckons' somehow immune to the effects of relativity? I think so-- the Penrose-Terrell effect preserves the apparent disc (conformality) of the planckons if they could be observed under relativistic conditions.

Infinity density $\Rightarrow $ Infinity energy-momentum $\Rightarrow$ singularity. Quark and standard model does not work in the scale of singularity. (also, quark is more like a structure of interaction, size until today tested to be pretty much $0$.)

Also, notice $\lambda=\frac{h}{p}$, with infinite density, $p$ went to infinity, which resulted $\lambda=0$, a measure $0$ in space. Thus infinite density had a measure $0$ in position space. ($\delta$ function might be a good way to think about it, but $\int f(x)\delta(x)=f(0)$ still a finite number.) However, if you assume the continuous of density in space with finite density, the above result implied your infinity either could not exists, or not analytic, or was a "fake infinity".

Thus either from GR or quantum, you would not get it.

Notice $\Delta E\Delta t$ relationship, $\Delta E=\infty\Rightarrow $ no restrictoin over $\Delta t\Rightarrow$ cross section could be $0\Rightarrow$ Not only continous of space was broken, but also, the space was nolonger hausdorff and you pretty much lost capability to define a particle.

According to particle physics, an elementary particle or fundamental particle is a subatomic particle with no substructure which is a point particle. They have no volume and theoratically can fill any volume with infinite density, provided their associated forces don't oppose that action. For example if we can somehow cause the energies of each elementary particle to be merged together instead of repelling each other, we can create a volume of infinte density with all the point particles merged together and their combined energies forming an infinite energy shell holding them together! Therefore, we end up having an object of infinite density and energy.

As many others pointed out, "touching" or becoming infinitesimally close is neither an allowed nor a proper concept at quantum scales, because of the uncertainty principle and the wave nature of particles. Down that level, something more fundamental governs the system than matter density, which is the information. And there is an upper limit of information that can be contained within a given region of space. This upper limit is called Bekenstein bound. Density of information is always finite everywhere. Since even information, given that it is more fundamental, cannot be infinite in a finite region, infinite density of anything seems impossible.

There's a lot of speculation here, and some pretty interesting discussion.

But I think the closest you can come to a 'true' answer is simply: We don't know.

We're just not sure how physics operates at the centre of a black hole - it might be some completely new concept. Quantum and GR don't seem to want to play nice together, so which quantising space might be a tempting solution it comes with its own host of problems.

My personal pet hypothesis: All particles probably density will end up centred around a point in space. The probability density function of each particle will constantly be reducing in width. This may imply ever increasing, but forever finite, density.

I'm no cosmologist but that's my understanding of it.

Infinite density can't exist because infinity anything generally implies a breakdown of the theory.

In fact, it's for this reason that the Romanian philosopher and physicist, Bescovitch (I may have mispelt his name as I can't find him on Wikipedia, but he is cited by Paul Davies on exactly this issue), deduced that there must be such a thing as intermolecular repulsion.

Not the answer you're looking for? Browse other questions tagged particle-physics density singularities quarks or ask your own question.

0
How can a singularity have infinite density?

0
Do we need infinite energy to make 2 similar charges touch only in theory?
2
Is there some special cutoff density after which spacetime "collapses" and forms a black hole?
11
Strong force between quarks that are out of causal contact
1
How to produce a 3D density map of a time-depenent system of particles?
3
Why is the top quark mass reconstructed too high when the bottom quarks were swapped (semileptonic decay of a ttbar pair)?
2
Is high temperature **required** for nuclear fusion?
2
Proton structure: are there photons, electrons and neutrinos in there too?
0
Do hadronic jets always accompany the production of quarks? Do we account for them when describing collisions and decays?