Does $m$ in this problem refer to the total mass of the system or just the mass of a single body?

I am trying to figure something out in this problem: 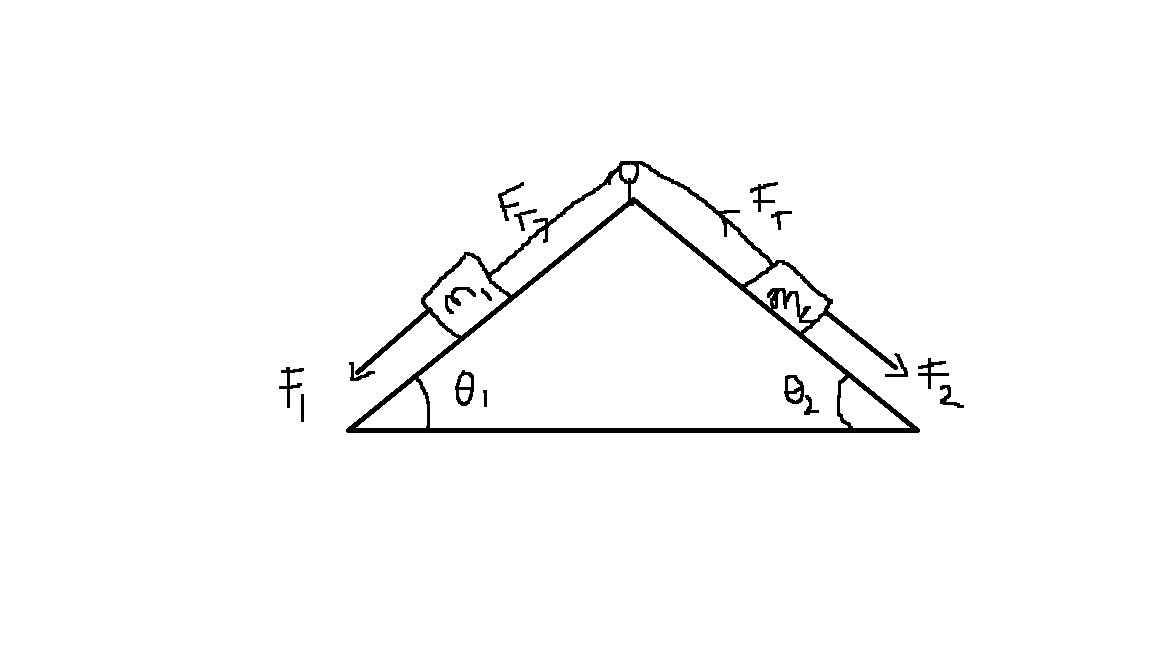 I am having trouble with these types of problems because often I don't understand which forces I need to consider when setting up $F=ma$.

Here is what I have got so far:

I hope my questions make sense.

The first thing you should do in such a problem is decide on the system(s) that you are going to consider and you will then apply $F=ma$ to that system.

In this case there are two systems (mass $m_1$ and mass $m_2$) as shown in the diagram below which are constrained to move with the same acceleration $a$ if the string connecting them is inextensible.

The next think to do is to draw a free body diagram for each of the systems which you have done by considering only the forces acting in directions parallel to the inclined plane.

Now apply Newton's second law to each of the systems taking the positive directions as shown by $x_1$ and $x_2$.

Having set up theses two equations you can eliminate $F_T$.

Having obtained this equation you might think "Why did I not choose both masses as the system? as the equation looks like an application of Newton's second law to such a system.
The reason that you should not do this is because $F=ma$ is actually a vector equation $\vec F = m \vec a$ and by considering each mass separately the application of $\vec F = m \vec a$ is easily converted into a scalar equation.

and a similar thing can be done for mass $m_2$.

For the two masses you could introduce a single coordinate system and apply Newton's second law but to get to the final result would be very convoluted and messy.

How fast $m_1$ falls depends on how large $m_1$ is. If $m_2$ were significantly larger than $m_1$, say 100kg vs. 1g, then the tension would be negligible. The tension isn't created solely by $m_2g$, but also by $m_1g$. Considering that the problem statement is symmetric with respect to left and right sides, how could the tension depend on only one side?

1st eq. should be m1g-T=m1a1 ,as you are balancing force on 1st block . So mass and acc. of 1st is to be taken into consideration and for the same reason 2nd eq. should be T-m2g= m2a2 and if we talk about a1 and a2 than a1=a2 as the string in between m1 and m2 is inextensible and if both a1 and a2 are not equal than length of string would change which is not possible

We have two equations, and two unknowns. Eliminating $F_T$ and solving for $a$ gives

5
Small oscillations of the double pendulum
7
Why does the tension on the pulley in an Atwood machine not equal $(m_1 + m_2)g$?
0
Can two bodies move with equal acceleration if forces acting on both are unequal?
1
Finding inclined plane acceleration
16
Pulley system. Why do I need to put a minus sign?
14
Deceptively simple mass-spring problem?
0
Newton's second law: direction of forces