Are we living in a false vacuum? Is there any way to tell?

I was thinking of the noted 1980 paper by Sidney Coleman and Frank de Luccia--"Gravitational effects of and on vacuum decay"-- about metastable vacuum states that could tunnel to a lower energy "true vacuum" with catastrophic results. I suspect the answer is that if our vacuum is a false one, we wouldn't "see" the true one til it hit us.

Inflation is a rapid stretching which result in cosmic smoothness and uniformity on large scales; as such, inflation is a key component of almost all fundamental cosmological scenarios. Not only does inflation explain the overall uniformity of the universe, but quantum fluctuations during inflation plant the seeds that grow into galaxies and clusters of galaxies that exist today.

The potential for the inflationary potential early in the universe is a de Sitter form. The FLRW equations are $$ \Big(\frac{\dot a}{a}\Big)^2~=~\frac{8\pi G\Lambda}{3}~-~\frac{k}{a^2}, $$ where we assume $k~=~0$ for the generally flat space we appear to observe. The early inflationary universe was driven by a scalar field which generated this vacuum energy where $V(\phi)~=~-a\times\phi$, $a$ a constant. This set the early cosmological constant for the de Sitter expansion with a vacuum energy about 13 orders of magnitude smaller than the Planck energy. The universe had more vacuum energy density than quark-gluon field density in a hadron.

The Lagrangian for a scalar field is $L~=~(1/2)\partial^a\phi\partial_a\phi~–~V(\phi)$ and in QFT we work with the Lagrangian density ${\cal L}~=~L/vol$ so the action $S~=~\int d^3xdt{\cal L}(\phi, \partial\phi)$. We run this into the Euler-Lagrange equation $\partial_a(\partial{\cal L}/\partial(\partial_a\phi))~-~\partial{\cal L}/\partial\phi~=~0$, and keep in mind $vol~\sim~x^3$. This gives a dynamical equation $$ \partial^2\phi ~-~ (3/vol^{4/3})\partial_a\phi~–~ \frac{\partial V(\phi)}{\partial\phi}~=~ 0. $$ If we assume the inflaton field is more or less constant on the space for a given time on the Hubble frame this DE may be simplified to $$ {\ddot\phi}~–~(3/vol^{4/3}){\dot\phi}~–~\frac{\partial V(\phi)}{\partial\phi}~=~0 $$ That middle term is interesting for it is a sort of friction. It indicates the inflaton field, the thing which drives the inflationary expansion, is running down or becoming diffused in the space. The potential function here is complicated and not entirely known, but it is approximately constant, or some small decrease with the value of $\phi$. What then happens, which is not entirely understood, is that the field experiences a phase transition, the potential becomes $V(\phi)~\sim~\phi^2$ with a minimum about 110 orders of magnitude smaller than it was in the unbroken phase. The phase transition has a latent heat of fusion that is released and this is the reheating. If the vacuum is a false vacuum then the $V(\phi)~\sim~\phi^4$ 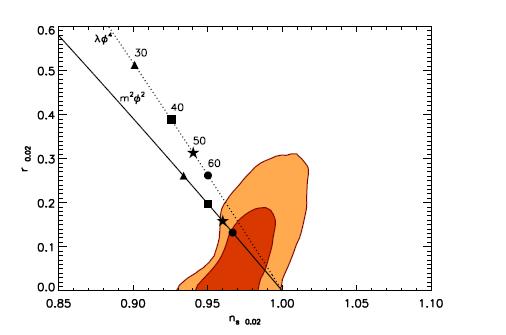 We now turn to some data H. V. Peiris and R. Easther, JCAP 0807, 024 (2008) arXiv:0805.2154 astro-ph. This figure illustrates joint 68% (inner) and 95% (outer) bounds on two variables which characterize the primordial perturbations, derived from a combination of WMAP and SuperNova Legacy Survey data. The predictions for our two inflationary models are superimposed. The numbers refer to the logarithm of the size of universe during the inflationary era. Cosmological perturbations are generated when this quantity is around $60$, so $\phi^4$ inflation is not consistent with the data.

So we are probably out of the danger zone for having one of Coleman-Luccia’s vacuum transitions which destroys everything.

Let me simplify it to this level: you've got a ball moving in 1D. And you observe that the ball is in a stable equilibrium.

Then, you assume that the potential for it has a form of a polynomial of 4th degree in x, with $x=0$ at the position of the ball:
$V(x) = Ax^4+Bx^3+Cx^2$
(No additive constant and no linear term because we are in the equilibrium.)

You can find the coefficients of this polynomial by testing small oscillations around the equilibrium. For this you need to find the dependence of frequency of oscillations on amplitude. And suppose that you have found the following values:
$A=1,B=-16/3,C=6$
By investigating this function you realise that it has another minimum, which is lower than the current one. So you are in "false vacuum" and you realised it without moving your system into it.

Now, of course this conclution is based on the assumption that the potential has this particular polynomial form and that whole your model works. But, in my opinion, this is the only context, it which the question makes sense.

One can always invent a model where true vacuum is created at some particular energy or even at some particular process. And in order to verify this we must get to the energy either destroying everything, either disproving the theory. Personally, I don't think that this is a sound scientific theory. But if allow yourself this "model freedom", then the answer to your question is: "yes the only way to check if we are in the false vacuum is to create the true one".

Not the answer you're looking for? Browse other questions tagged quantum-mechanics astrophysics soft-question vacuum or ask your own question.

0
Are there tests of the existence of false vacuum?
18
Can energy be taken out of the QFT vacuum?
1
Metastable Vacuum and Higgs Potential