Accelerating to catch a moving object

Object A has a velocity of zero.

Object A can accelerate/decelerate at $5m/s^2$.

Object A can start accelerating along the same line as Object B as soon as Object B passes it. Or, put another way, A and B have the same starting point. As mentioned someplace else, A is a dragster, B is a race car passing by.

How do you go about calculating how long Object A must accelerate, and then how long it must decelerate in order to rendezvous with Object B. That is it must not just catch Object B, but then have the same velocity at Object B, within the limits of its maximum acceleration.

I think this is different from this Powered interception of a moving object question, in that it sounds like they're trying to accelerate to intercept (and perhaps figuring out what rate of acceleration is needed, whereas mine has a limit on acceleration).

As for the system of equations, I think it's something like this:

So, that works out to:

Which seems to simplify down to:

But that's as far as I can get. The distance calc isn't useful, since we don't know it.

I don't even know if my approach is sound. I don't think so.

So I'm interested in how to approach this kind of problem.

I think I have some information about $d$.

That suggests that for Object A: (given $t_a$ is the "boost" time, and $t_d$ is the deceleration time)

We can use $at_a$ to calculate the velocity of A at the end of the acceleration phase.

I subtract here because the acceleration is "negative", since it's decelerating.

So, that means that:

And, honestly, can't make heads or tails of it. It suggesting that there are negative answers. Perhaps it's capturing the negative acceleration as negative time instead. And I really don't know what to make of the graph. 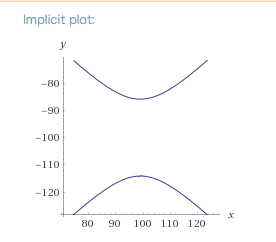 It's not intuitive to me that if the acceleration is fixed, that there are multiple solutions. Intuitively, A should be able to accelerate to some point that has a higher velocity than B, and then start decelerating to match. If the acceleration can change, then, sure it's all over the map.

So, maybe this simple case is still no solvable or I've made some other bad assumptions.

There is not going to be one unique answer, as in principle you can make the needed deceleration time arbitrarily small, at least if I am interpreting this right as how you've phrased it.

In particular, will it will take 100 s to accelerate up from rest to the 500 m/s speed at which the object you seek to catch is moving, you need only apply ever so slightly an acceleration now to put you over that and start you approaching, e.g. if you now accelerate for 0.1 s, you will be going 500.5 m/s, and you will now be closing on the object at 0.5 m/s by shifting reference frames. If you accelerate for 0.01 s you will be closing by 0.05 m/s. You will take a lot longer to get there, but eventually you will close on it and all it will take is a deceleration for the same 5 $\mathrm{m/s^2}$ rate at the same length of time to put you steady with respect to it and thus "caught".

The limit is zero acceleration after matching and infinite time to catch. Unless there's some other constraint to meet, like that after some time the first object will crash and that needs to be prevented, thus setting a minimum on the closing time, this will not change.

This problem is an optimal control problem. Generally they are solved using the calculus of variations, which is closely related to the Lagrangian and Hamiltonian formulations of classical mechanics.

However, as you have intuitively guessed, for problems like you have proposed here, the solution is usually a “bang bang” control which consists of pushing the control to its limit the entire time and only immediately switching to the opposite limit as needed. So your approach is not a generally correct approach, but it is valid for this specific problem.

So, you have three unknowns (t1, t2, and d) and therefore you need three equations. So far you have two equations. You can get one more by writing down d in terms of a, i.e. the distance traveled by the accelerating vehicle.

0
Powered interception of a moving object

1
Time and distance where velocity is a function of time
4
How do I find minimum constant deceleration so that object does not pass distance d in time t?
15
How to brake 'beautifully'?
2
Utilizing maximum acceleration $a$ for displacement $d$ with initial velocity $v_0$ and final velocity $v_1$
1
Finding equation for exponential deceleration
0
Powered interception of a moving object
18
The instant an accelerating object has zero speed, is it speeding up, slowing down, or neither?
2
Kinematics and Acceleration Windows