To understand the Hall effect better: Why are the external current links (orange) connected in this configuration necessary? Shouldn't only the electrodes connected by the light blue arrows be externally connected in a circuit since that's the direction of net current flow? Also, if the Hall parameter is sufficiently large, wouldn't the Faraday current go to 0?

In MHD theory, the generalised Ohm law is used to determine the current density. For situations encountered in MHD generators the law is given by :

Where σ is the conductivity of the fluid, and β is the Hall parameter. Please note that this equation has some omitted terms which are insignificant for typical situations encountered in MHD generators. The cross product term to the left is what you refer to as the Faraday current, while the cross product term in the right hand side is the Hall current.

The Faraday current term gives a perpendicular current to both the velocity and the applied magnetic field. The Hall current term gives a current that is perpendicular to the Faraday current and the magnetic field (which means it is parallel to the velocity as the figure shows). In that sense, the overall current is titled as it is the vectorial addition of both current components, with the tilt being a result of the Hall current.

A good explanation of the theory behind MHD generators can be found in this paper and this presentation.

EDIT: In MHD generators the power delivered to the load as the earlier presentation shows is given by:

Where all parameters were defined earlier, except the loading factor K which is defined by: 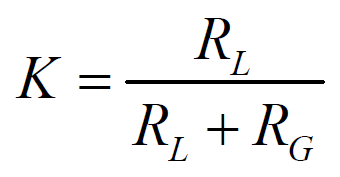 Such that RL is the Load resistance and RG is the generator resistance. The factor K(1-K) arises naturally in the power equation as a result of Kirchoff's Current Law, when it is applied in the plasma and in the external circuit. The full derivation of this expression can be found in pages 21-22 of this PhD thesis.

I agree that they should provided a lot more explanation as to where that current direction is coming from, as it's not immediately obvious.

As to why the electrodes are connected in series, it's just to provide high-voltage, low-current power output. They would be designed so that the currents are matched. To connect them in parallel, you would need to design it so that the voltages are matched instead, and that may be more difficult in this setup.

Not the answer you're looking for? Browse other questions tagged electromagnetism magnetic-fields electric-current maxwell-equations electromagnetic-induction or ask your own question.

0
Measurement coil for magnetic fields, linearity and frequency of the field
0
Is there a limit on the magnetic field in a Hall generator?
0
Alternative form of Ampere's Law
1
Why use vacuum permeability during derivation of $\vec{B}=\mu_0(\vec{H} + \vec{M})$
4
Stumped on understanding a Feynman lecture about force from wire on magnet
0
Compass Needle between two solenoids
0
Can you have electric current without a circuit?
0
Is an increase in inductive current caused due to an increase in magnetic field?