Why is electric field strong at sharp edges?

I learned about the coronal discharge, and the common explanation is because the electric field is strong where radius of curvature is small. But I haven't found anything yet that explains why electrons like to crowd at the peaks, and escape from the holes.

My intuition suggests electrons try to distribute on the surface as uniform as they can, but they don't. Why?

Electrons just don't like each other, a point captured by the phrase that "like charges repel." So, imagine a gymnasium full of students pretending to be electrons, staying as far away from others as possible. Anyone near the center of the crowd will feel badly pressed and will try to work there way towards the edge of the gym, where at least one side will no longer have fellow students milling about. The result? Most of the students will gravitate towards the edge of the gym and hover there, to take advantage of that lack of other students on the wall side of the gym.

Now imagine a narrow corridor leading out of the gym. Even better! Students in that corridor will only have fellow students on their left and right.

Now imagine the very end of that corridor, a sort of point. Even better! Now, the student who finds that spot will benefit from having only one student nearby. But somewhat ironically, that same effect will cause other students to pack themselves into the long, narrow corridor more tightly, since pretty much anywhere in the corridor makes them less exposed to the full set of students than being in the gym does.

This is the kind of effect that makes edges, wires, and points more attractive to electrons, which similarly just don't want other electrons too nearby.

The electric field gradient is the rate at which the electric field falls off, and it is strongest on such edges and lines and points. You can use the gym analogy to see why that is. Imagine the mutual disdain of the students for each other as behaving like spooky spiky hair that extends ghost-like for many meters out from each student. The strands extend easily through ordinary bricks and such, but like Star Wars light sabers they absolutely refuse to move through each other. What happens?

For students lined up against a straight wall, the spooky spikes push against each other and wind up extending almost straight through the gym wall. The gradient in that case is actually quite small, since you end up with about the same number of spooky spikes per square meter far outside the gym wall as right up against it.

But what about the opposite case of that one student at the very end of the long, narrow dead-end corridor? Her spooky spikes are free to expand outward almost like giant ball, very quickly becoming quite sparse even a few meters beyond the corridor. That's a very steep gradient, and with electrons it's what leads to all sorts of interesting effects.

One effect in particular that I should note is that because the only repulsion that the student at the end of the long corridor is from other electrons in that corridor, her desire to move away from that corridor becomes far more directed and acute. She wants to escape! And if there is any weakness in the wall at the end of that corridor, she will succeed, escaping out into free space. And others will then follow! This is why electrons can escape from very sharp points, even at room temperature. The repulsion of electrons for each other is so strong that even the strong binding force of metals may fail if the electrons manage to find a point sufficiently isolated from the main body of free electrons in the metal.

Finally, I should point out that these two perspectives -- mutual avoidance and spooky spikes -- are really just two ways of describing the same thing, which is the way the repulsion of electrons falls off with distance. Calculus provides the machinery needed to make precise predictions from such models, but it's still important to keep in mind that the mechanisms by which such effects occur are by themselves not nearly as exotic as you might think. They have real analogies in events as simple as students following "electron rules" in a gymnasium.

Consider a charged conductor made out of two spheres of radii $R_1$ and $R_2$, connected with a conducting wire. Assume that $R_1<R_2$, and that the spheres are far apart so that effects of electrostatic interactions between the spheres can be neglected. Then, the surface charge density, the quantity that describes how crowded the charges are, is higher at the smaller sphere.

A generalization of this argument shows that charges are more crowded at pointy parts of a conductor, as opposed to the more gently-curved parts.

These are all very good explanations, at an intrinsic and extrinsic level. However, there is a very succinct answer if you need to quote it quickly.

Because the surface of a conductor is always a surface of constant potential, the electric field E = −∇φ, must be perpendicular to the surface at every point on the surface. So if the geometry of your conductor is very sharp, the field lines will diverge at large angles respective to each other: thus a large field gradient at that sharp edge.

Consider a pear shaped cathode. In this cathode equipotential lines will be very closed near sharp end and more spaced near round shape of the pear.

Therefore more sharpen the cathode, smaller is $d$, higher is the Electric field. This principle is used in Carbon Nano Tube technology.

it is simple to understand it is actually because- the filed of charge feel more stable (less electrostatic repulsion force charge at sharp age then at plane so high no of charge are easily come across sharp end and increase intensity near sharp end. 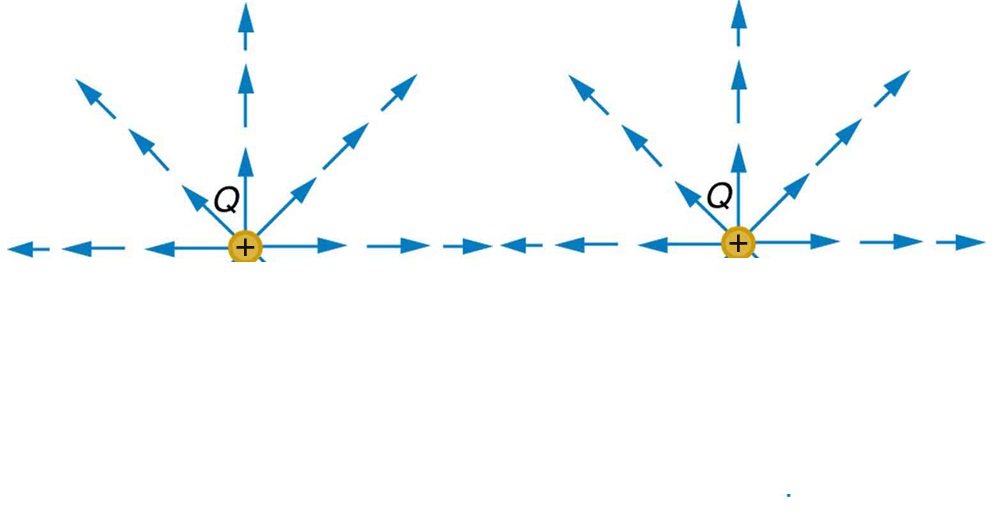 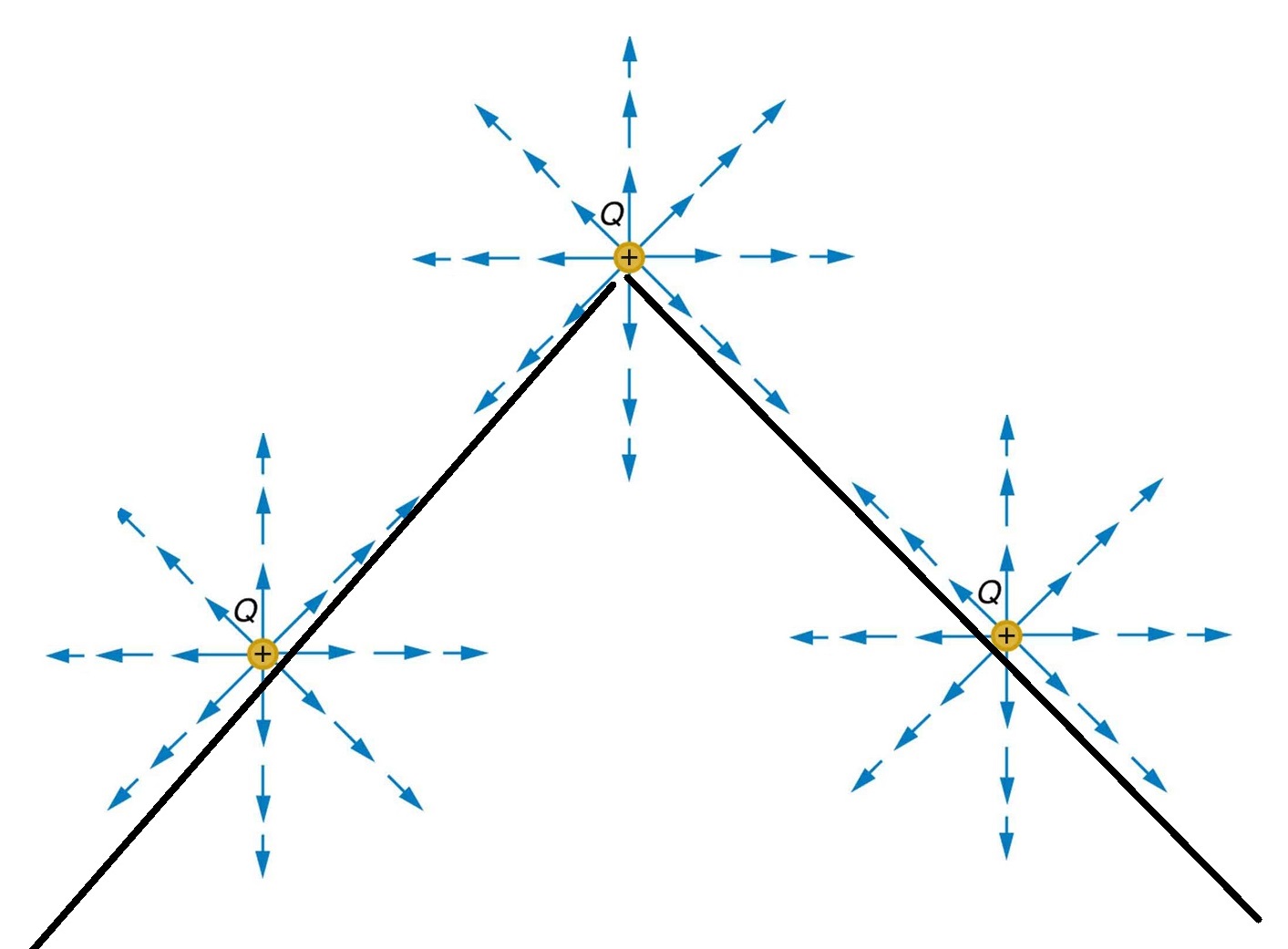 charge feel less repulsion then a plane on sharp point . as shown.

4
Why charge density is higher in the sharp edges of conductor?
2
Why charge distribution is greatest at pointy edges of a surface?
10
Why does charge accumulate at points?
16
Why do metal objects in microwaves spark?
1
How electrostatic charge is distributed in a tube?
1
Electrostatic Self Energy question
0
Calculating Charge created by Van De Graff Generator
1
Do charges in a metal group up a little in the middle?