Equation of the saddle-like surface with constant negative curvature?

What is the equation for the saddle-like 2d surface (embeded in 3d Euclidean space with cartesian coordinates x, y and z) with constant negative curvature frequently used to illustrate open universe (for example in the following image is taken from Wikipedia)? 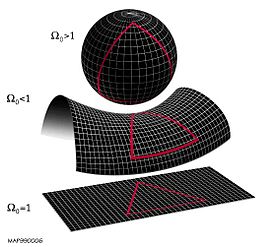 Flat universe (zero curvature) is illustrated by a plane, with equation say

Closed universe (constant positive curvature) is illustrated by a surface of sphere, say

One shouldn't expect to have a "good" formula for the local isometric embeddings of a constant negative curvature surface in Euclidean $\mathbb{R}^3$. This is due to a little theorem proved by David Hilbert around 1901:

Theorem There does not exist a smooth immersion of the hyperbolic plane into Euclidean 3 space.

The theorem has been further studied in the years following. In 1961 Efimov showed that any complete surface with curvature strictly bounded above (that is to say, if there exists a negative number $K_0 < 0$ such that the Gaussian curvature is always strictly less than $K_0$) cannot admit a smooth (twice continuously differentiable) isometric immersion into Euclidean three space.

That is to say, if you try to "extend" any surface in Euclidean 3 space that satisfies constant negative curvature, you are guaranteed to hit a singularity. In particular, you cannnot expect the surface to be described by $F(x,y,z) = 0$ where $F(x,y,z)$ has a nice algebraic expression (say, polynomial) and has smooth level sets.

Typically the image one usually use to illustrate the notion of negative (but not constant) curvature is the graph $$ z = x^2 - y^2 $$ which produces a classical saddle, or the catenoid whose Gaussian curvature, while everywhere negative, is not constant. (Though it has constant [in fact everywhere vanishing] mean curvature.)

Lastly, however, despite the above, it is possible to embed "patches" of hyperbolic plane into Euclidean 3 space. There are many ways of doing so (one can search for the term pseudosphere; though some people use the same term for the hyperboloid/de Sitter spaces embedded in higher dimensional Minkowski space), but one of the more well-known is the tractricoid. (See Wiki entry here.) Parametrically in cylindrical coordinates $(z,r,\theta)$ the surface can be described by:

and has constant negative curvature.

then the corresponding surface is:

Not the answer you're looking for? Browse other questions tagged cosmology space curvature or ask your own question.