How to determine if a calculated Raman mode in a crystal is active or not?

I have used an ab initio electronic structure code to calculate the harmonic Raman spectrum of a (molecular) crystal. However, no use of symmetry has been made, and it might well be that some of the vibrational modes that I obtained are actually Raman-inactive. As a matter of fact, when I consider a single cell, two of the vibrational modes I obtain have a high Raman intensity, but when I double the size of the cell, these two modes seem to fuse into a single mode of much lower intensity (not zero, but...). My question(s) would thus be the following.

Your second question is based on the misconception that the the super cell is a physically different system than the single cell, which is not true. The translational symmetry of crystals is baked into solid state theory and both descriptions, super and single cell must yield the same results. Now you might ask: "Why do I get twice as many modes with my super cell?".

Raman and IR modes are nothing more than phonon modes at the $\Gamma$ point, i.e. $k=0$. Solid state theory tells us that only phonon modes with almost (dipole) or exactly zero (Raman) contribute to dipole interaction and Raman scattering Phonon modes are described through a phonon dispersion with respect to the k vector. The k vector basically tells you how the phase of a certain mode changes over several unit cells.

When you double the cell in real space you cut k space in half. All phonon branches that extend into the cut region are folded back as indicated by the figure below. 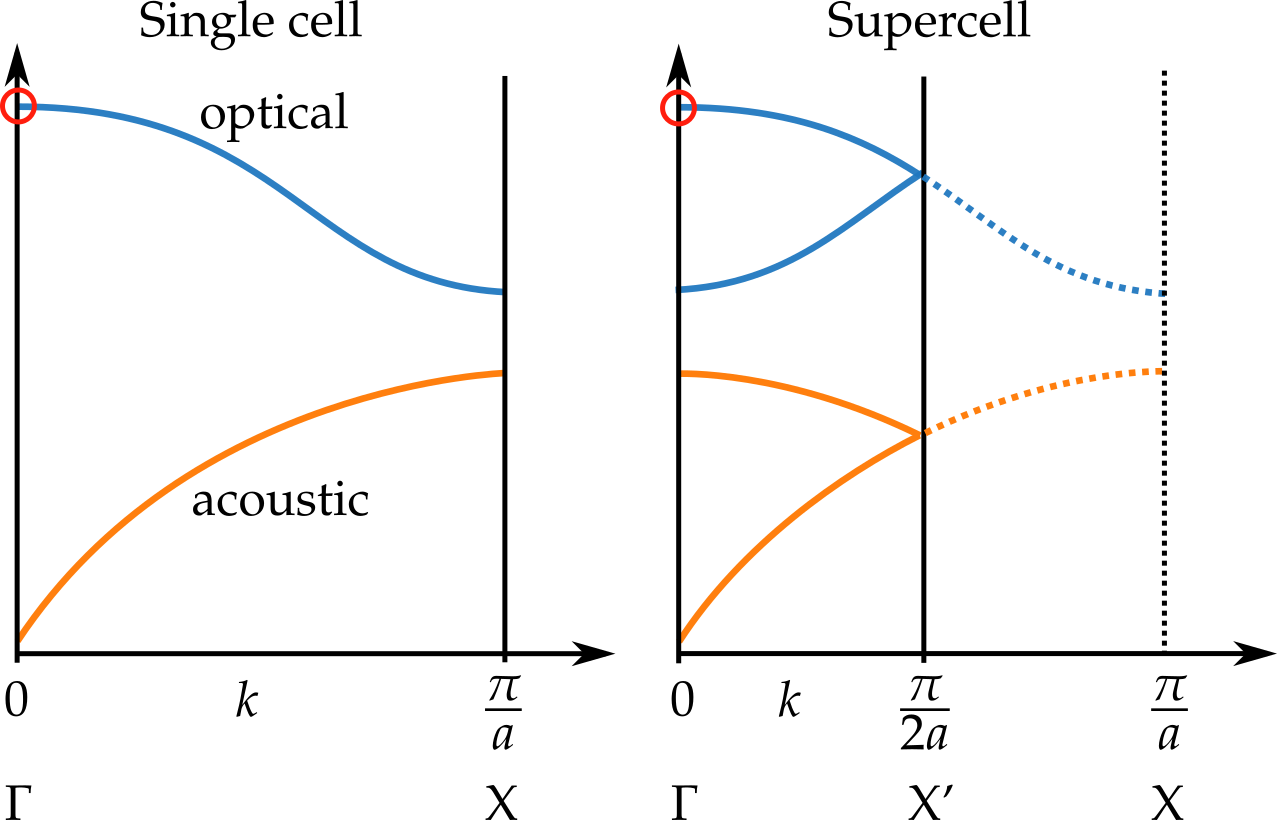 However the single cell description is still valid. Only the modes that originally were IR or Raman active (indicated by the red circle in the image) are IR or Raman active in the supercell calculation. The supercell has a new symmetry operation, namely a translation by a half lattice vector. The new modes at $\Gamma$ transform with -1 character under this transformation and are therefore light inactive.

Not the answer you're looking for? Browse other questions tagged symmetry crystals vibrations raman-spectroscopy or ask your own question.

23
Vibrational anharmonic coupling and noise-induced spontaneous symmetry breaking in a hexagonal finite mechanical lattice
4
What's the difference between Raman scattering and second harmonic generation in crystal?
0
How to experimentally identify the exposed face of a crystal?
0
How to explain about Raman spectroscopy?