Is there a temperature-pressure phase diagram of carbon dioxide for the lowest temperatures and pressures? 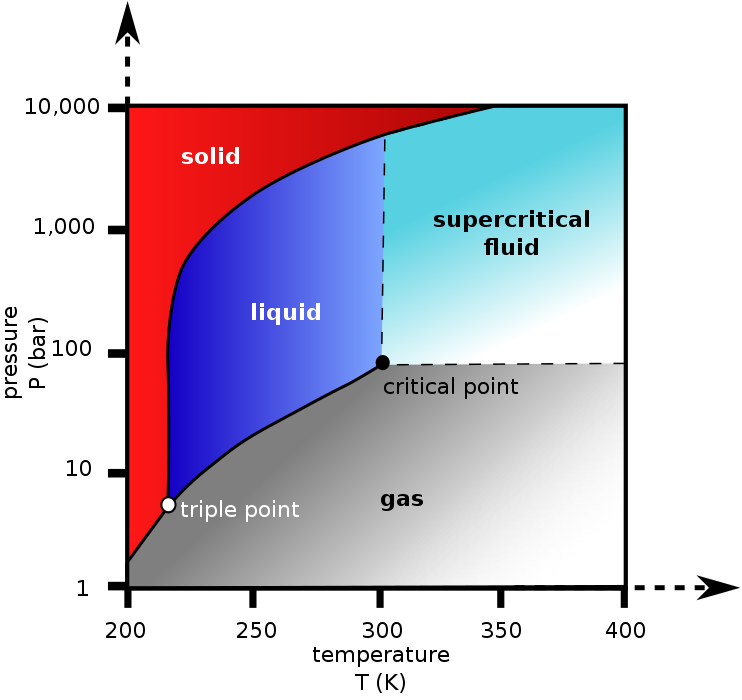 The image above will probably be well known to visitors of Wikipedia on CO$_2$.

But is there a temperature-pressure phase diagram of CO$_2$ for still lower temperatures and lower pressures as well ?

I believe that the phase diagram is quite featureless at temperatures and pressures below the triple point values. Phase I of carbon dioxide, the well-known "dry ice" which is marked as "solid" on the Wikipedia phase diagram, continues to be stable right down to the lowest studied temperatures and pressures. The only phase transition in this region is when the vapour phase becomes thermodynamically stable relative to the solid, the sublimation line that is already marked on the diagram.

Martin Trusler J Phys Chem Ref Data, 40, 043105 (2011) has constructed an equation of state (partly fitted to data, partly calculated using theory) covering this phase. Unfortunately that paper requires a journal subscription to see the details, but in the abstract I believe anyone can see this sentence:

The equation of state is valid at temperatures from 0 to 800 K and at pressures from the solid–fluid phase boundary to 12 GPa.

The properties of solid carbon dioxide have been well studied along the sublimation curve from temperatures as low as 2 K up to the triple point.

The equation of state of Trusler includes a calculation of the free energy of the solid based on the zero-temperature lattice structure of Phase I, using a quasi-harmonic approach. So, if there were any more phases at low $T$ and $P$, this would not have been an appropriate starting point.

The interesting behaviour of CO$_2$ comes in at higher $T$ and $P$, where a range of solid phases exists, not all of them consisting of individual molecules. For a sketch see this blog. When you look at the diagram on that page, bear in mind that (a) the $P$ and $T$ axes are the other way round to the Wikipedia diagram and (b) the pressure scale is so large that you can't make out the details (such as the solid-liquid-vapour triple point and the liquid-vapour critical point) that appear on the Wikipedia diagram. This is also why you just see "fluid", rather than "liquid" and "gas". The diagram also gives you an idea of the full temperature and pressure range of Phase I.

Not much of an answer, but I found a couple that go down to nearly 150K and one that goes down to 133K (though written as 1000/7.50 K) by looking up "CO2 sublimation curve". Some of them have equations on them that can be extended down. 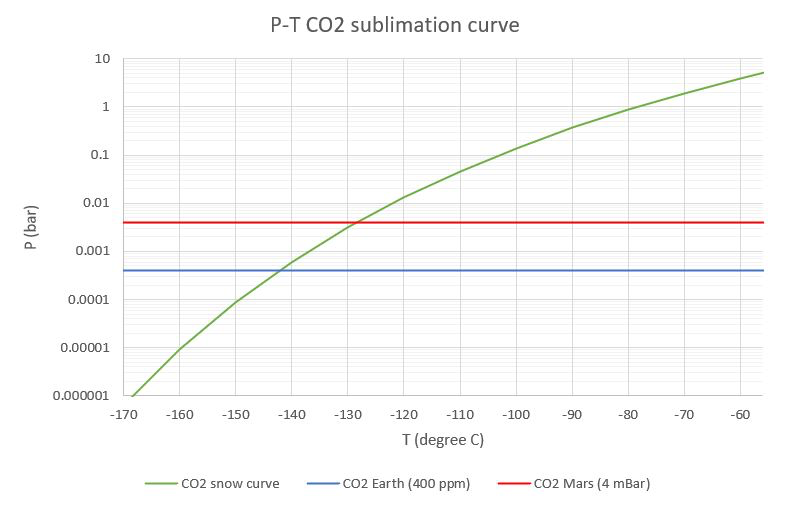 Hence for co2 snow on Mars to not sublimate immediately you'll need a temperature of -128°C; on Earth it would be -142 °C. Of course you can make temporarely CO2 snow on earth with a CO2 fire extinguisher, but that will sublimate rapidly.

Not the answer you're looking for? Browse other questions tagged pressure phase-transition phase-diagram low-temperature-physics or ask your own question.