Van der Waals Forces Between Stacked Material and Another Material

If I have a material (1) and I approach another material which is made from a stack of two different materials [ (2) and (3) ], how can one calculate the Hamaker constant or Van der Waals force ? 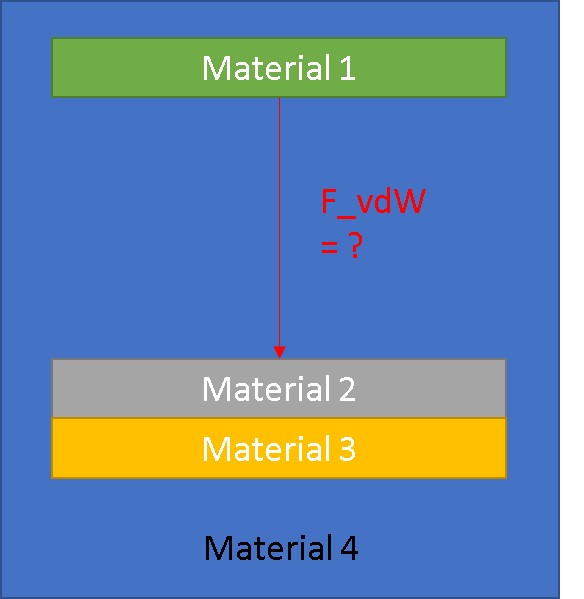 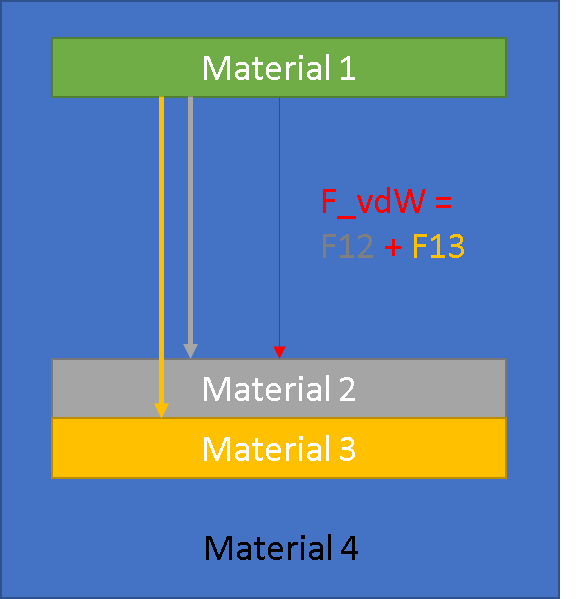 But that is strange, because this would mean that I can increase the force by making a stack of a lot of very thin alternating layers, instead of two thicker layers ?? 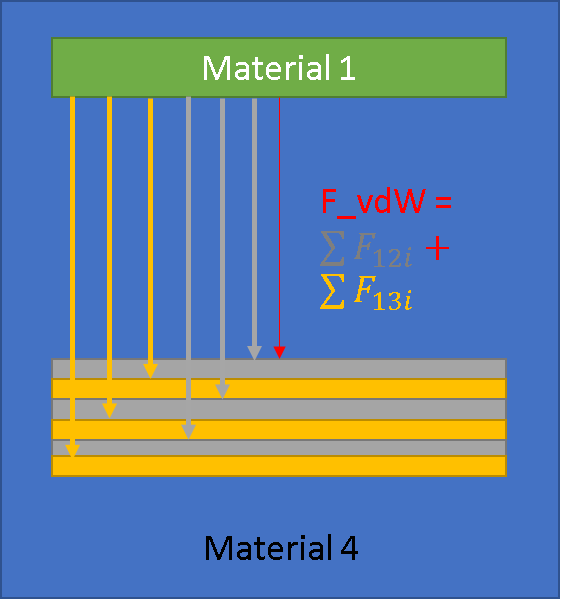 I'm going to offer an answer, although I can only go a limited way towards the full explanation. The short answer is that it is more complicated, you can't simply add the effects.

We need to distinguish between the Hamaker constant and Hamaker's approximate solution of this kind of problem. Interactions of this kind are traditionally broken down into a sum of different effects which are often grouped together under the general heading of "van der Waals" forces, but the dominant one in normal circumstances (and the one of most interest here) is due to London dispersion interactions. For interactions between two atoms, they can be explained in terms of fluctuating dipoles on each atom being correlated with each other, giving rise to an attractive energy $\propto \alpha_1 \alpha_2/r^6$, where $r$ is the separation. $\alpha_1$ and $\alpha_2$ are the polarizabilities, which measure how easily the electrons on the atoms respond to applied electric fields. Now, it's important to state right away that the London dispersion interaction is not a pairwise additive interaction: if there are three atoms in close proximity, there is a three-body term and so on.

When you bring two solids close together, with parallel planar surfaces, and vacuum in between, you can try and add up the attractions between them. Hamaker's approach was to simply integrate the $1/r^6$ atom-atom interactions over each "half space". One can assume a uniform density of atoms, but that's not absolutely essential; the key assumption is the pairwise additivity, and this underlies your question. Anyway, the result is that the integrated interaction is not short range, it is long range: for separation $D$ the attractive energy is proportional to $1/D^2$ (so the forces are $\propto 1/D^3$) and the proportionality constant is called a Hamaker constant.

However, Hamaker's approach is very inaccurate. A better approach was proposed by Lifschitz. This involves going back to basics. Instead of considering the fluctuations of electrons in atoms, you need to consider the dielectric responses of the two solids involved in the interactions. These play a role analogous to the polarizabilities. Moreover, for layered systems, it turns out that the breakdown of the pairwise assumption is important. The nature of each layer, and its thickness, and the order of the layers, all affect the result. The whole calculation is somewhat involved, but can be reduced to solving Maxwell's equations with suitable boundary conditions. The outcome is a similar dependence of energy on separation, at least, at long range, to Hamaker's original theory, but a much better estimate of the Hamaker constant: one which depends on the details of the layers.

The interaction between planar surfaces which have been coated with some other material is a question of great technological importance. I believe that these problems were first solved, using the Lifshitz approach, by BW Ninham and VA Parsegian, who published a series of papers around 1970. But it might be better to direct you to their books:

They all give an explanation of the Lifshitz approach. The last one has a whole section on layered planar bodies.

Not the answer you're looking for? Browse other questions tagged forces nanoscience or ask your own question.

0
Hydrogen bond and van der Waals bond
3
induction of van der Waals forces
2
Is a normal force acting on an object that is hanging from the ceiling?
0
How does the nature of bonding between individual atoms in a molecule affect the van der Waal interactions between molecules?
7
Are Van Der Waals Forces related to the Van der Waals Equation?