(I'm repeating myself a lot here, but it's because I want to make my confusion clear.)

If 2 billiard balls are the same exact mass, and one hits another stationary one head on, I have heard that the hitting ball will often stop entirely while the one which got hit will go off at the original velocity of the first one (ignoring friction and heat and other potential loss of energy).

I understand that this agrees with conservation of momentum. However, now that I am thinking about it, I am a little confused as to how it is possible.

Ball 1 is the hitting ball, with an original velocity of $V_1$, and Ball 2 is getting hit, originally stationary.

Once Ball 1 hits Ball 2, it immediately starts accelerating it at the same rate that it decelerates. In other words, Ball 1 exerts the same force on Ball 2 that Ball 2 exerts on Ball 1. In this way, momentum is conserved, so that for any amount of momentum that Ball 2 gains, Ball 1 loses.

Since they have the same mass, Ball 1 will decelerate at the same rate Ball 2 accelerates.

Now, the only way for Ball 1 to exert a force on Ball 2 is for them to be in contact. However, the instant after they gain the same velocity, the 2 balls would no longer be in contact, as Ball 2 would now be moving away from Ball 1, or at least at the same rate as Ball 1.

That being said, it seems impossible that Ball 2 would ever become faster than Ball 1, since Ball 2 would only be able to be accelerated up to the point where it is going at the same velocity as Ball 1.

And it seems even more impossible for Ball 1 to stop completely and Ball 2 to go off at the original velocity of Ball 1.

After reading some scrupulous comments, (not in a bad way though, I love it when there are new variables introduced and things pointed out, and all the "what if" questions allways make for awesome discussion, thanks for the comments!) I've realized its better to imagine the billiard balls as floating through space than on a pool table, to get rid of the possibility that spin will affect the collision.

Or we could just imagine a frictionless pool table.

But better to imagine them floating through space, because everyone loves space

Your analysis is correct up to the point when the two speeds are equal. This is also the point when the relative velocity is zero. But at this point the two balls are deformed (elastically). The forces acting on the two balls during approach is an elastic force. However small the deformation is, it is there. So what happens now is that indeed the two bodies start to fall apart (the distance between them increases) and they start to expand back to the original shape. The interaction force starts to decrease (does not drop to zero instantly). The work done during this second part of the process is the same as during the first part so the kinetic energies and velocities change by another on half. This is the difference between perfect elastic and non-elastic collisions. In the later case the two bodies do not expand back to the same shape (or not at all) so the exchange of velocities is not complete.

It may help if imagine a spring between the two bodies. When the velocities are equal, the spring is still compressed. Actually it has maximum compression. So obviously the force exerted by the spring is not zero as it starts to expand.

Note:A nice example is considering a rubber ball bouncing off a ground(suppose perfectly elastically), in that situation there is also a point where the relative velocity with the ground is zero(when the ball is momentarily at rest with the ground) but still the ball rises up due to elastic forces as it gains kinetic energy due to the energy stored through the deformation it had initially endured.

You are forgetting about conservation of energy. You need to impose that

I think when you visualize the impact, it's a bad idea to think of the balls as completely rigid objects. We can think of the impact as if there's a massless spring between them. Even when they get to the same velocity, the spring will continue pushing the balls until the incoming ball loses all its speed and the speed of the other ball gets to maximum. That will be the moment when they lose contact.

Short answer: During the collision, while the first ball is going faster than the second, the balls are compressing. Once the second ball begins moving as fast as first, the balls start uncompressing, pushing the balls apart. Once they fully separate, they are moving different speeds.

The first half of the collision pushes the billards together and deforms them, and in the second half of the collision, the energy stored in the deformation is released back into mechanical energy, and the billards undeform and push apart, resulting in different velocities. Billards are "elastic", or like springs: almost all of the energy when deforming them is stored and mechanically released.

Long answer: In addition, the earlier answers, you can reach the result mathematically with physical laws and one assumption.

A result of Newton's Laws is the conservation of momentum

Obviously, there are many values that satisfy this equation. So we need add another physical law: the Law of Conservation of Energy. (Assumption: there is negligible rotation of the balls.)

Because billards are elastic, none of the energy is converted into heat (this in fact, is what is meant by elastic...you could go further into materials science and find out exactly what about the chemistry of the billards causes this property, but at the end of the day, billards are elastic, like bouncy balls or springs), and

Note that this result depends on the assumption $\Delta H = 0$; i.e. the balls un-deformation converted 100% of the energy from the deformation back into mechanical energy. I.e. an elastic collision.,

Let's look at it from a different frame of reference and use a simple relativistic way of thinking:

Consider a frame of reference that has the origin $(0,0)$ at the midpoint between the 2 balls, and moves with velocity $\frac{v}{2}$ in the same direction as the first ball.

Collisions between billiard balls are essentially elastic collisions. Although billiard balls seem rigid, they are more-or-less elastic - the material responds to compressive stress (pressure) with some amount of elastic strain (deformation). That strain stores energy; work is done to deform the material, which is released back as the stress is removed and the material restores to its original shape. The strain is tiny, but it is non-zero and, except for perhaps exotic or theoretical materials, no material is perfectly elastic, so some energy will be lost from the collision. Nevertheless, billiard balls are a pretty good approximation of elastic collision.

Collisions between real billiard balls on a real playing surface are more complicated for all sorts of reasons. Here are just a few:

The stopping of the ball which hits another ball depends upon the elasticity of the balls or even one of the two balls. If the balls are very hard like if made of wood or metal, when one ball hits another there is no "waiting time" for the transfer of kinetic energy from one to another. It is near instantaneous and hence one ball transfers nearly all of it's kinetic energy to the ball it hits. Hence the ball "nearly" stops. 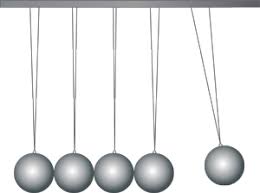 This is not the case in case of elastic balls.

When the ball A hits B, the shape of A changes due the inertia of the ball B and also due to it's own elasticity. When the ball A relaxes it transfers it's kinetic energy to the ball B minus the internal friction in the ball A due to shape change and other external frictional losses. Now the ball B deforms a little due to ball A pushing on it(further waste of energy) and moves forward by pushing upon ball A when it relaxes + the energy imparted by the collision itself.

Now the fate of ball A is either it can move forward using the little energy it has left after the collision or roll backwards depending upon the force with which it has hit the other ball.

And it seems even more impossible for Ball 1 to stop completely and Ball 2 to go off at the original velocity of Ball 1.

If the balls A and B in the above picture were rigid,

And the ball A stops due to the nearly total transfer of kinetic energy.

0
How do momentum get transferred?
0
Elastic collision

7
Why is momentum conserved when a ball hits a vertical wall?
9
What determines whether a pool ball will bouce backwards after colliding with another pool ball?
3
Can momentum be distributed to multiple objects which travel in different vectors?
4
Does the Inertia of a Cue Ball Affect its Reflection Angle off a Resting Billiard Ball?
1
Why does the ball bounce backwards?
1
Rolling ball hits the wall
1
What happens when in space a basketball flies and hits another resting basketball?
0
Classical momentum conservation and quantum entanglement
0
Calculating coefficient of restitution for a three-body system