Do white holes encode the future evaporation of the black hole?

In General Relativity, white holes arise when one formulates Maximal extensions (the process by which coordinate singularities are mapped to new non-degenerate coordinates) to a geometric solution (say, Schwarzschild metric). As classical solutions, they are not expected to be physical.

On the other hand, if one were to imagine some sort of regularization process that smoothes the singularity, one can imagine trajectories of radiation falling into the black hole and exiting into the white hole, and there is no known argument to expect white hole solutions to disappear once a physically sound regularization takes place.

If Hawking radiation is a real physical process that can happen in nature, is hard to ignore the analogy that exists between what we classically expect from white holes, and a black hole that is spitting its guts in its final moments before total evaporation.

Do white holes encode the future evaporation of the black hole? 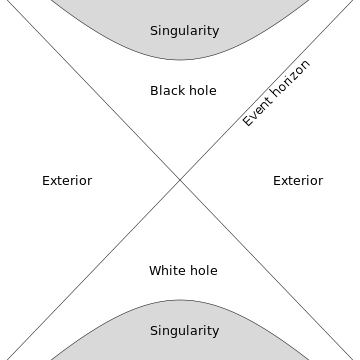 A black hole then evaporate slowly and the evaporation rate will be proportional to inverse of its mass. At the end it will eventually vanishes with a flash of radiation. This leads to the quantum information paradox.

Not the answer you're looking for? Browse other questions tagged general-relativity hawking-radiation white-holes or ask your own question.