Does the depth that the accelerator pedal is depressed correspond more closely to the force or the power that the engine delivers to a car?

Consider a car that only moves directly forward without turning (so that we can model its trajectory as motion in one dimension), and assume we can neglect both air resistance and the frictional torque on the axle, so that its trajectory is determined solely by its engine (i.e. it doesn't brake). The engine exerts a force $F(t)$ on and delivers a power $P(t)$ to the car. Supplemented with initial conditions, either of these two functions determines the car's trajectory $x(t)$ via the differential equations $m \frac{d^2x}{dt^2} = F(t)$ or $F(t) v(t) = m \frac{d^2x}{dt^2} \frac{dx}{dt} = P(t)$.

For real-world car designs, if the accelerator pedal is depressed by a fixed amount, does that correspond to the engine delivering a fixed force/torque or a fixed power to the car? I assume that the force/power delivered to the car may in general be a nonlinear, though monotonic, function of the depression angle, but let's eliminate that complication by assuming that the pedal depression is held fixed over time. Does this more closely correspond to $F(t) = $ const. or $P(t) = $ const.? (I assume in real life it's very complicated because there are a lot of effects at play and neither approximation is exact, but I suspect that one of them is reasonably accurate. Also, if we consider the engine in isolation then it's more natural to talk about its delivered torque than force, but I'm holding the rest of the car design constant so that we can lump all those car-specific details into a fixed effective axle radius that converts between the two quantities.)

But if it's fixed power $P_\text{engine}$, then we get $$\begin{align*} m \frac{dv}{dt} v &= \frac{d}{dt} \left( \frac{1}{2} m v^2 \right) = P_\text{engine} \\ v(t) &= \sqrt{\frac{2P_\text{engine} \times (t-t_0)}{m}} \\ x(t) &= x_0 + \frac{2}{3} \sqrt{\frac{2P_\text{engine}}{m}} (t-t_0)^{3/2}. \end{align*}$$ This would lead to the acceleration actually decreasing over time as $1/\sqrt{t}$, even in the absence of any friction or air resistance. (Of course, realistically there's some finite ramp-up as you depress the pedal. This solution formally has you undergoing infinite acceleration right when you depress the pedal, which is obviously impossible - I'm thinking about the engine's steady-state behavior once it settles down. And obviously the engine can't provide either constant force or power once the car begins to exceed its maximum designed operating speed, so both of these models break down.)

The pedal depth determines the amount of air entering the carburetor. My intuition is that this would determine the engine's power rather than its force/torque, but it seems kind of weird to me that that would lead to a trajectory $x(t) \sim t^{3/2}$ which eventually undergoes arbitrarily low acceleration. Is this the case? If so, what is the direct mechanism by which the delivered torque decreases as the axle's angular velocity increases?

Edit: I'm curious how this works for both modern cars, which are crammed to the gills with complicated electronics, optimizations, and human-psychology design features, but also separately for a simple idealized internal combustion engine toy model (for which a go-cart or lawn mower engine might be a reasonable real-world example, I'm not sure).

The answer is it is incredibly complicated.

We already see two terms here. Whether this is proportional to horsepower or torque depends on how you look at it. Adding more fuel/air mixture means more energy is produced during combustion each cycle. If you are at a given RPM, that means depressing the accelerator will roughly increase the power by how much airflow goes through. We'll look at the case of a fixed accelerator setting over a range of RPMs in a moment (this is what your question asks about, but its useful to see both relationships).

However, there's a few gotchas. The curve of butterfly-valve angle to airflow is not trivial. It has at least a sinusoidal term, and likely several others to deal with the complexities of airflow. Carburetors also aren't perfect, so we have their curve to deal with. So no matter what we do, we'll see non-linear effects. Generally motors roll off at low and high RPM

Then we add complication when we switch to fuel injection. With fuel injection, the computer has a great deal of control over what the curve looks like.

Then we add complication with drive-by-wire. Many modern cars are now designed to seem "peppier" than they really are by artificially putting more of the acceleration in the low end of the accelerator. They also may wait to see if you really meant to press the pedal. They can give better fuel economy if they smooth out your accelerator use.

Once we understand the fixed RPM story, it's easier to see the fixed-accelerator story because the complicated stuff is already in our heads. If we strip away all the realities of the engine, throttle position is closest to force/torque. At higher throttle positions, you permit more fuel/air to enter the chamber per cycle, but at a fixed throttle position, there's a roughly fixed amount of fuel/air per cycle. This means that as the RPMs go up, the number of explosions per second goes up, so the power goes up linearly with number of explosions per second. However, as RPMs go up, so does linear distance traveled (the 'd' in W=F*d). So as the work goes up linearly, so does the distance. Thus force stays constant (to the first order).

Indeed, if we look at a torque and horsepower vs. rpm chart from a real engine, we see horsepower is roughly linearly increasing with RPM. Torque is much closer to horizontal (we also see that, in the real world, these non-linear effects are quite substantial. The toy model doesn't address them) 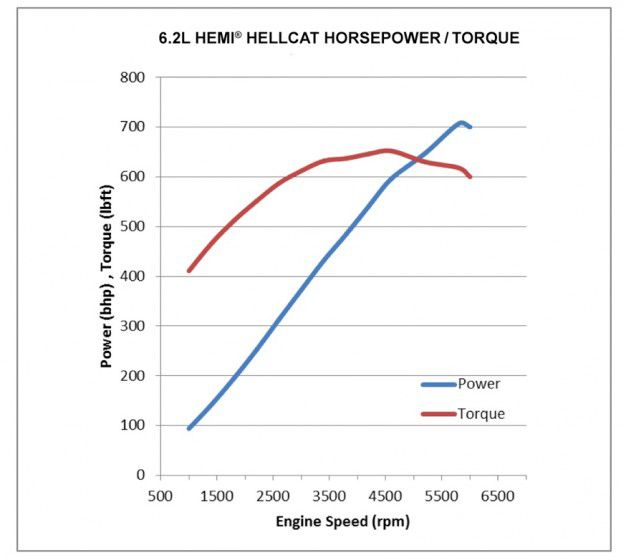 I think you are asking about the relationship between throttle and velocity in and "ideal" car: no friction, no losses, no non-linearities.

At any point in time you can calculate your current speed as a constant times the square root of the amount of fuel burned since you started.

In practice, that's a lot more complicated since there are all sorts of loss and friction mechanism and your max speed is determined by the point where max power from the engine equals the amount of lossess (mechanical, air, rolling, friction, etc.)

Not the answer you're looking for? Browse other questions tagged everyday-life torque power combustion or ask your own question.

2
Calculating the acceleration of a car
4
Car “oomph”: power or torque?
0
Power in 1st Gear
0
How is power of engine transferred to kinetic energy of car?
6
How does a car gain kinetic energy?
0
What causes the push you back suddenly into your seat feeling when you accelerate cars?