Can the center of charge and center of mass of an electron differ in quantum mechanics?

Traditionally for a free electron, we presume the expectation of its location (place of the center of mass) and the center of charge at the same place. Although this seemed to be reasonable for a classical approximation (see: Why isn't there a centre of charge? by Lagerbaer), I wasn't sure if it's appropriate for quantum models, and especially for some extreme cases, such as high energy and quark models.

Can the center of charge and center of mass of an electron differ in quantum mechanics?

The basic picture to keep in mind is something like this: 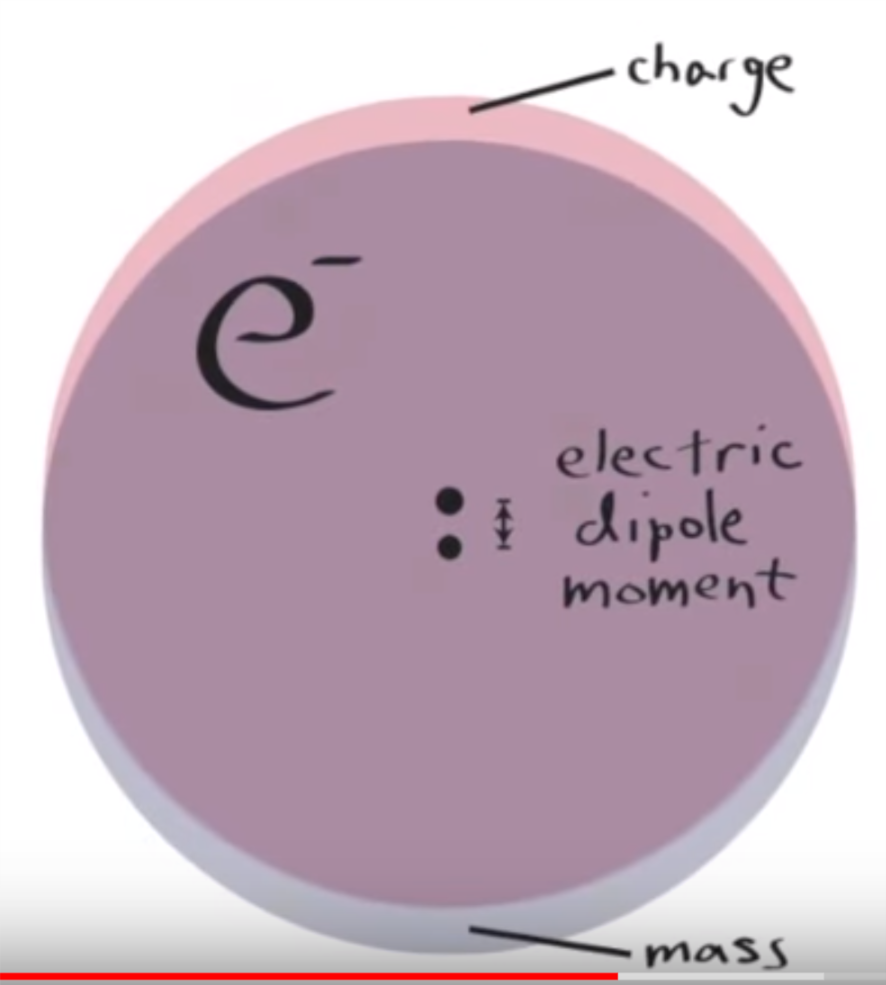 Now, because of complicated reasons caused by quantum mechanics, this dipole moment (the vector between the center of mass and the center of charge) needs to be aligned with the spin, though the question of which point the dipole moment uses as a reference isn't all that trivial. (Apologies for how technical that second answer is - I raised a bounty to attract more accessible responses but none came.) Still, complications aside, it is a perfectly standard concept.

As luck would have it, the Standard Model of particle physics does contain violations of both of those symmetries, coming from the weak interaction, and this means that the SM does predict a nonzero value for the eEDM, which falls in at about $d_e \sim 10^{-40} e\cdot\mathrm m$. For comparison, the proton sizes in at about $10^{-15}\:\mathrm m$, a full 25 orders of magnitude bigger than that separation, which should be a hint at just how small the SM's prediction for the eEDM is (i.e. it is absolutely tiny). Because of this small size, this SM prediction has yet to be measured.

On the other hand, there's multiple theories that extend the Standard Model in various directions, particularly to deal with things like baryogenesis where we observe the universe to have much more asymmetry (say, having much more matter than antimatter) than what the Standard Model predicts. And because things have consequences, those theories $-$ the various variants of supersymmetry, and their competitors $-$ generally predict much larger values for the eEDM than what the SM does: more on the order of $d_e \sim 10^{-30} e\cdot\mathrm m$, which do fall within the range that we can measure.

How do you actually measure them? Basically, by forgetting about high-energy particle colliders (which would need much higher collision energies than they can currently achieve to detect those dipole moments), and turning instead to the precision spectroscopy of atoms and molecules, and how they respond to external electric fields. The main physics at play here is that an electric dipole $\mathbf d$ in the presence of an external electric field $\mathbf E$ acquires an energy $$ U = -\mathbf d\cdot \mathbf E, $$ and this produces a (minuscule) shift in the energies of the various quantum states of the electrons in atoms and molecules, which can then be detected using spectroscopy. (For a basic introduction, see this video; for more technical material see e.g. this talk or this one.)

The bottom line, though, as regards this,

Is there any experimental evidence to support or suspect the center of mass and charge of an electron must coincide?

is that the current experimental results provide bounds for the eEDM, which has been demonstrated to be no larger than $|d_e|<8.7\times 10^{−31}\: e \cdot\mathrm{m}$ (i.e. the current experimental results are consistent with $d_e=0$), but the experimental search continues. We know that there must be some spatial separation between the electron's centers of mass and charge, and there are several huge experimental campaigns currently running to try and measure it, but (as is often the case) the only results so far are constraints on the values that it doesn't have.

you'd see that in the bubble/cloud chamber, if the center of mass and charge were different, then you'd have some torque effect that would completely change the electrons trajectories(when they are under electric/magnetic field).

Not the answer you're looking for? Browse other questions tagged electromagnetism mass charge field-theory point-particles or ask your own question.

3
Is the self energy divergence problem of point charge resolved in the context of general relativity?
1
Other values of mass of the electron and the charge of the electron?
3
Center of mass motion and variation of mass
10
Can mass of an electron be measured without measuring its charge?
7
The problem of infinite energy of electron as point charge?
7
If Maxwell's equations relate fields at the same point, how can waves propagate between different points?
1
Can the mass of a hydrogen atom be calculated in a gauge-invariant way?