Can Fourier transform be applied to light, as a way to find the individual elements of a color?

The Fourier transform can help one discern the individual frequencies of a sound. Every sound can be decomposed into sine waves.

Knowing that light is a wave, that it "has" a frequency, is it possible, from one color, to isolate the individuals pigments that compose it using a Fourier transform, a bit like a prism would? How, or why not?

There's a bit of a misconception here. A prism causes dispersion, which is the decomposition of a broad spectrum of light into its spectral components via the components' deviation angle from their original trajectory - but this is not in any way related to Fourier transform, rather it's because of Snell's law of refraction, and the fact that refraction changes with the frequency of the light (color).

Fourier decompositions are every bit as valid for light as they are for sound. However, you seem to have a rather confused picture of the relationship between mathematics and the real world.

Of course, with this route, you measure, you get $f(t)$, you Fourier transform it, and you get.... a bunch of numbers, and not much more.

If what you actually want, on the other hand, is a spatial separation between the different frequency components of light, then let me introduce you to this handy device: 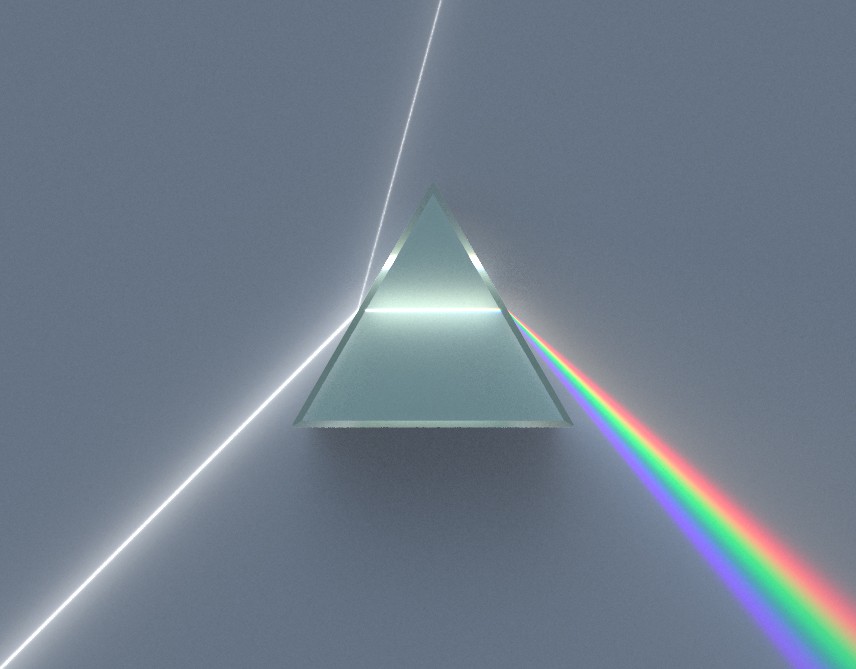 The fact that prisms separate light by colors tells you immediately that they are doing a physical implementation of the Fourier decomposition, and if what you want is just to measure how much intensity your light has on each frequency component, you can just put in a prism (though in the interests of accuracy you'd normally use a diffraction grating) and measure the intensity of light on each color; devices which do this are generally known as optical spectrometers.

Similar devices can be built for sound, of course, though they are not particularly useful since it's much easier to record the sound and then work with the recording as an electronic signal. However, it's important to note that "it's electronic" does not mean that it's being done digitally, and for many decades if you wanted to measure the Fourier transform of an audio signal you would need to use analog electronics devices whose principles of operation are remarkably similar to those of the optical prism.

This is part of a broader trend: no physical phenomenon actually "calculates a Fourier transform", which is a mathematical process that lives exclusively in our heads. But, for both sound, radio signals, and light, there are plenty of devices that are able to implement basic dispersive processes to produce the kind of separation that the Fourier transform models.

Yes, definitely. A Fourier decomposition, in a sense, is exactly what a prism does.

First, historically, spectroscopy was the study of visible light, dispersed through a prism, according to its wavelength.

You are asking about Fourier transforms, and usually white light is made of all visible lights in the spectrum.

Physically, the Sun's light is not yellow, it is white, but there is no such as white wavelength photons. White light is made up of all photons from the visible spectrum, all wavelengths.

Now the perception of white light is different, it is because in our eyes we have receptors, RGB, for reg, green and blue wavelength lights. All colors we see are made up of combinations of these wavelength photons.

What a prism does is as you say to show you those wavelength photons, that make up the visible light.

Not the answer you're looking for? Browse other questions tagged visible-light electromagnetic-radiation fourier-transform spectroscopy or ask your own question.

14
Have we directly observed the electric component to EM waves?

39
Fourier transformation in nature/natural physics?
2
Spectral decomposition of radio waves and quantization
0
Frequency Jamming
0
Can every color in the RGB space be generated with a single wavelength EM wave?
1
Rayleigh-Sommerfeld Formula: Explanation of these terms?
0
Can an electromagnetic wave travel less than the speed of light and yet perceived by the eye as a light?
2
Why does jiggling a ball in a nonlinear potential well lead to multiple harmonics?
5
Are monochromatic EM waves supposed to be sinusoidal?