How can a frequency-specific interference in MRI be limited to a single stripe on the corresponding image (zipper artifact)?

The so-called herringbone or spike MRI artifact on a given example could be traced to a specific point(s) in Fourier space ("k-space").

The idea is that during the acquisition of the image, a certain RF wave emitted by the patient (conveying the sought after information about diseased or normal anatomy) becomes distorted by some extraneous RF interference at a given point in time, and sampled as such through a DFT process into Fourier space (k space). After obtaining the reverse FFT, that dot of artifact affects the whole image in a striped pattern. Here is an example with multiple horizontal lines superimposed on an image of an ankle: 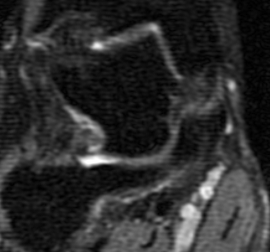 There is another RF-interference artifact in MRI, called zipper-artifact, manifested on the clinical images is as a thin stripe running from top to bottom, as in this phantom MRI image: 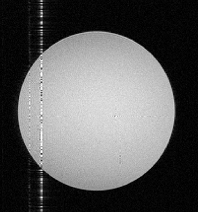 In the case of the zipper artifact there is a corruption of the signal sent back to the RF antenna by the part of the anatomy being scanned, affecting a particular specific frequency, and typically due to an EM leak caused by poor shielding or inadvertent opening of the scanner door. This frequency-specific phenomenon would affect each signal collected in the process of filling in k space. In contradistinction, a zipper artifact occurs at a single point in time, showing a dot in k-space.

The question is, If every point of information in k-space (Fourier space) in MRI affects the entire reconstructed image after performing a reverse FFT, how can a frequency-specific problem in Fourier space produce a single vertical stripe on image space - as opposed to affecting the whole image as in the herringbone artifact above?

[The parts in a sepia background are greatly appreciated bits of invaluable help from Alex Dresner, PhD.]

The RF noise that is associated with a zipper artifact dominates the signal at a specific electromagnetic frequency, such as $63.25$ MHz, and the $x$ or frequency encoding gradient uses a range of frequencies to encode the position in that direction (for all phase encodes), such as $63-64$ MHz, so that $63.25$ MHz would always appear at the same physical location in a given image.

The representation of the artifact on k-space will not be punctual, as in the simple dot in k-space of a spike artifact. Below is a toy example of what k space might have looked like based on a drawing with a vertical line to the left of a circle on the top row. The vertical line represents the final manifestation of the zipper artifact on image space, while the circle is the actual anatomical image we are trying to acquire. The different k-space representations with the artifact (top row), and without (bottom row) are shown on the right column: 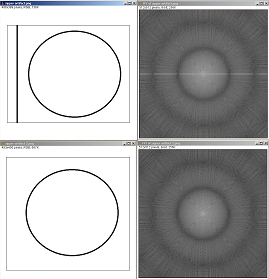 Clearly, the artifact is shown in k-space spread across the $x$-axis ($k_x$) - it has to be this way because the line runs vertically from top to bottom, and hence, its reproduction calls for as many horizontal spatial harmonics as allowed by the pre-selected frequency-direction resolution.

That there is not a single spatial harmonic affected in k-space (as is the case with spike artifacts) may seem to contradict the explanation for the zipper artifact: a specific frequency interfering with the data acquisition process. However,

Below this is illustrated as an electromagnetic source of pollution affecting selectively the red voxel contribution to the final signal received by the coil. An EM leak introduced by opening the door of the scanner with the exam in progress would allow an extraneous EM frequency to enter the room. In this example, this contamination source matches the precession frequency of the red voxel in the brain (localized by the position vector $\color{red}{\vec r}$) induced by the magnetic gradients. The sum of the signal generated by two highlighted voxels (red and magenta) changes as a result of the EM contamination altering the red voxel, resulting in a different final signal (in blue) collected by the receiver coil, and discretized into a line of k-space:

The EM leak would change the phase term introduced by the frequency gradient $\color{turquoise}{\nabla G_z}$ at a particular location $\color{red}{\vec r}$ (the red voxel):

The match between the EM leak and the precession frequency at $\color{red}{\vec r}$ would distort the information contributed by the red voxel - contained in the initial transverse magnetization, i.e. $M_{xy}(\color{red}{\vec r},0)$ - to the final aggregate signal in any given phase step acquisition filling in k-space, i.e. the Fourier transform:

Therefore, the entire line in k space is affected, even as the only non-informative voxel is the red one. Given the identical replication of the frequency gradient at each phase encoding step, it comes as no surprise to expect a vertical artifactual line.

Not the answer you're looking for? Browse other questions tagged fourier-transform medical-physics nuclear-magnetic-resonance or ask your own question.

6
What is the specific meaning of “Fourier frequency” (as opposed to simply “frequency”)?
18
How specifically does an MRI machine build an image from received radio waves?
1
Resolution in a Fourier transform spectroscopy setup
0
How does a gradient elicit a RF signal from the stimulated tissue in MRI?
0
Why do the matrices in k-space and the final MRI image have to match?
0
Why is the image complex in magnetic resonance imaging? (and how does partial Fourier imaging work?)