What happens if you travel through space at the same rate that space expands?

Hubble's Law gives the rate at which the universe is expanding, as a function of distance.

Take an estimated value for $H_0$ of 70 (km/s)/Mpc. If we take some star 1 Mpc away from my current position, my understanding is that Hubble's Law says that the star is moving at a rate of 70 km/s away from me.

Now, what happens if I travel in my spaceship at 70 km/s for one second. I have moved 70 km, and the space between me and the distant star has also expanded by 70 km. Am I still the exact same distance away from the star?

Defining speed and distance in the expanding universe is not trivial. To be clear, let's disregard the gravitational attraction and assume that you start moving toward a remote star with such a speed that you see no redshift. This would essentially mean that your proper distance to the star is momentarily constant and in this sense your speed relative to the star is zero. (The proper distance is measured by the time it takes for light from the star to reach you.) Then the question is, how this situation would evolve in time.

If the universe is flat and expanding without acceleration (such as in the Milne cosmology), then nothing would change. You would always remain at the same proper distance from the star with the redshift of zero. The latest measurements suggest that the universe is flat within a small margin of error. However, the universe is expanding with acceleration described by the cosmological constant attributed to dark energy. In this case, the star would accelerate away from you gradually gaining speed. Currently the amount of acceleration is very small, so your distance to the star would change very slowly and essentially remain approximately the same for some time.

The expansion of the universe in the current $\Lambda\text{CDM}$ cosmology ("Lambda - Cold Dark Matter", where $\Lambda$ is the cosmological constant) is described by the Friedmann equations that depend on the matter content of the universe. Until about 70,000 years from the Big Bang the universe was dominated by radiation, then by matter, and now by dark energy, which is effectively repulsive causing the expansion to accelerate.

The Friedmann equations have an analytic solution for a flat universe dominated by a combination of matter and dark energy. This closely describes the universe since a very young age of about when the Cosmic Microwave Background radiation was emitted. In this solution, the scale factor of the expansion of the universe depending on time is given by

The plot of this equation shows the scale factor in blue and its time derivative in red indicating that the speed of expansion has already turned from reducing to increasing. The horizontal axis shows the ratio of the age of the universe to the current Hubble time, currently 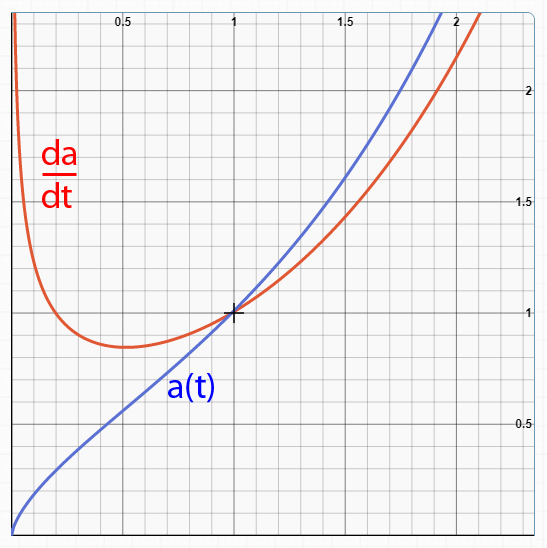 The nature of the dark energy is currently unknown. See Dark Energy and the Accelerating Universe for details.

5
Is space itself expanding or is it just momentum from the Big Bang carrying things apart?
3
How can the effects of dark energy be distinguished from the effects of the acceleration of the universe from the big bang?
0
Is really there exists any kind constant that can explain expanding universe and increasing time?
1
Using Hubble parameter to compare sizes now and then
2
How does the redshift - distance graph show the rate of expansion of the universe at every moment in time?

3
How long does it take for expanding space to double in size?
17
According to Hubble's Law, how can the expansion of the Universe be accelerating?
6
Accelerating expansion of the universe: so?
2
How does a particular galaxy's apparent recessional velocity CHANGE as the universe expands?
6
How is “little $h$” measured in cosmology? The dimensionless parameter from the Hubble constant, $H_0$
2
Is the inverse of the Hubble constant always approximately the age of the Universe?
5
The difference between comoving and proper distances in defining the observable universe
0
Is the expansion of the universe really accelerating? Or does it just look like it?