Why is the electric potential of an electron in a capacitor measured from the negative plate and not the positive plate here?

This is from Liboff Introductory quantum mechanics 1st(current is 4th) edition: 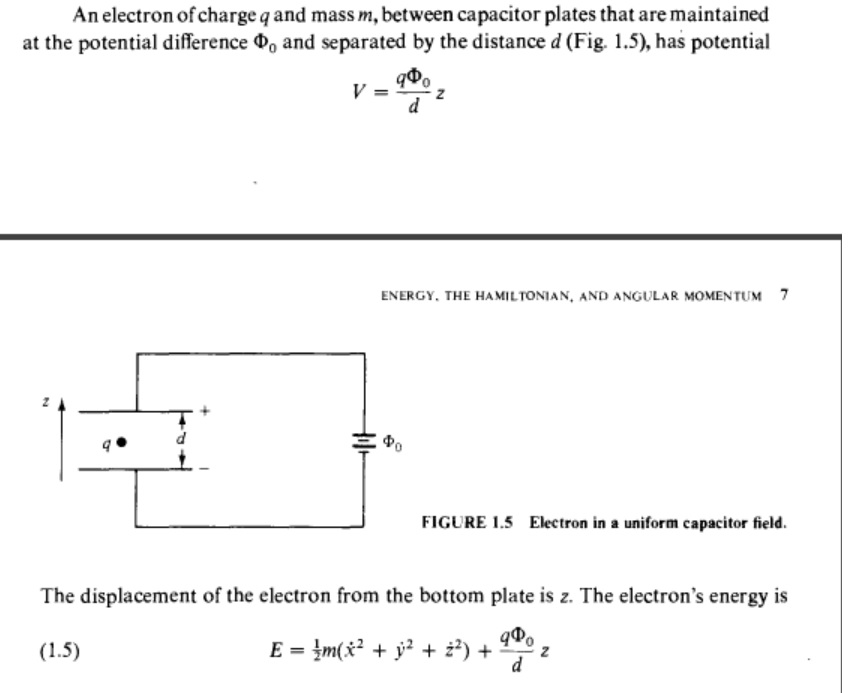 I don't understand why the distance z is measured from the bottom plate if the potential is of an electron which should gain Energy going to the top plate.

$E$ is the constant mechanical energy (kinetic energy plus electric potential energy) of the electron and parallel plate system.

The charge $q$ on the electron is negative so as the distance of the electron from the bottom plate $z$ increases the electric potential energy becomes more negative ie decreases which would result in the kinetic energy of an electron increasing.

In the graphs below I have made the substitution $q=-e$ wherre $e$ is the magnitude of the charge on an electron and $V$ is the potential. 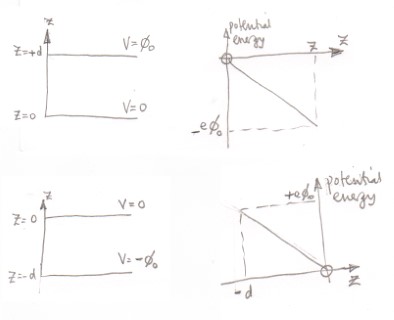 You will note that wherever you choose the zero of potential in going from the bottom plate to the top plate there is a decrease in the potential energy.

One of the foremost experts on electricity in the 18th century was Benjamin Franklin, who argued in favour of a one-fluid theory of electricity. Franklin imagined electricity as being a type of invisible fluid present in all matter; for example, he believed that it was the glass in a Leyden jar that held the accumulated charge. He posited that rubbing insulating surfaces together caused this fluid to change location, and that a flow of this fluid constitutes an electric current. He also posited that when matter contained too little of the fluid it was negatively charged, and when it had an excess it was positively charged.

Eventually electrons were discovered, and it turned out that an excess of electrons was found where the charge was labelled negative. If he had chosen names the other way around, a positive number would have been used for the charge of an electron. We would have labelled the plate with excess electrons the positive plate.

Regardless of labels, electrons are repelled from the plate with excess electons, and attracted to the plate with a shortage. Electrons lose potential energy and gain kinetic energy when traveling in this direction.

Mathematically, you calculate a potential energy loss in the formula because the charge of an electron is $q$, and $q < 0$.