What is the magnetic field profile around an electronic resistor? 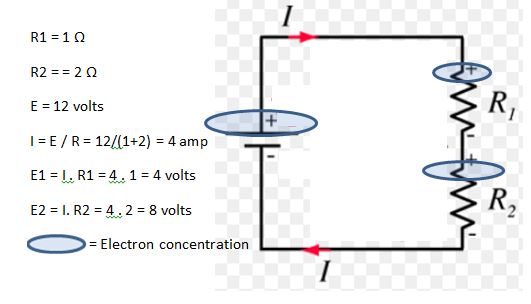 If there is a build-up of electrons in the areas as shown by the blue ellipses then I would expect that they would effect the strength of the induced magnetic field in their vicinity.

I have been looking for but cannot find what the strength profile of the induced magnetic field profile at a fixed distance $d$ from the center of the wire conductor and across a resistor (assuming both wire and resistor to have the same cross-sectional area, and thus thin or thick film resistors and such like could not be used) around a DC circuit. To eliminate conjectural theoretical arguments, I would really prefer direct measurements from an appropriate lab experiment.

,
I have shown 3 possibilities:

Possibly it would look like option 4 (i.e. something different to any of the ones shown).

A description of what the profile looks like and an explanation of why would be appreciated. A reference link to an experiment verifying the profile would be fantastic.

Since the current is constant through the resistor, I can't imagine any reason why the magnetic field strength wouldn't be constant at fixed distance to the resistor either. That's Ampere's Law.

Not the answer you're looking for? Browse other questions tagged magnetic-fields electric-current electrical-resistance or ask your own question.

1
Field inside a wire?
0
Experiment for finding resistivity
0
Difference in induced current, when magnetic field "span" is reduced?
1
The inside of a variable resistor (potentiometer)
0
Phase lag between current and magnetic field due to a wire
3
In a simple battery + resistor circuit, what form of energy is lost from the electrons upon exiting the resistor?
1
Voltage Change Across a Resistor/Circuit
0
Why does the capacitor charge through a resistor?
0
Graph profile of the voltage drop vs resistance across a resistor, and the physics behind electric potential difference
3
Why is electric field larger in a resistor?