How much electrons can absorb a single photon?

In the one hand, energy can be emitted\absorbed only by a discrete portions.

In the other hand - according to Coulomb law the higher distance - the lower force, because count of force lines per area decreases with distance. This fact always confused me: the problem is that it's difficult(or impossible) to compare classic explanation and quantum.

We have a frame where electron is fixed. In classic physics - it creates an electric field, in theory of fundamental interactions - it emits a virtual photon, plus we can know about it only if will interact with it. And I'm getting trouble, imagining how it occurs. I know that photon(especially virtual) doesn't have size because of 0 zero mass, as understand we can say, that it doesn't exist in the space at all. We can't even calculate possibility of finding the photon, because, as far as I understand $|\psi|^2$ for photon equals zero.

However, can You explain what will, or may happen in the situation described below 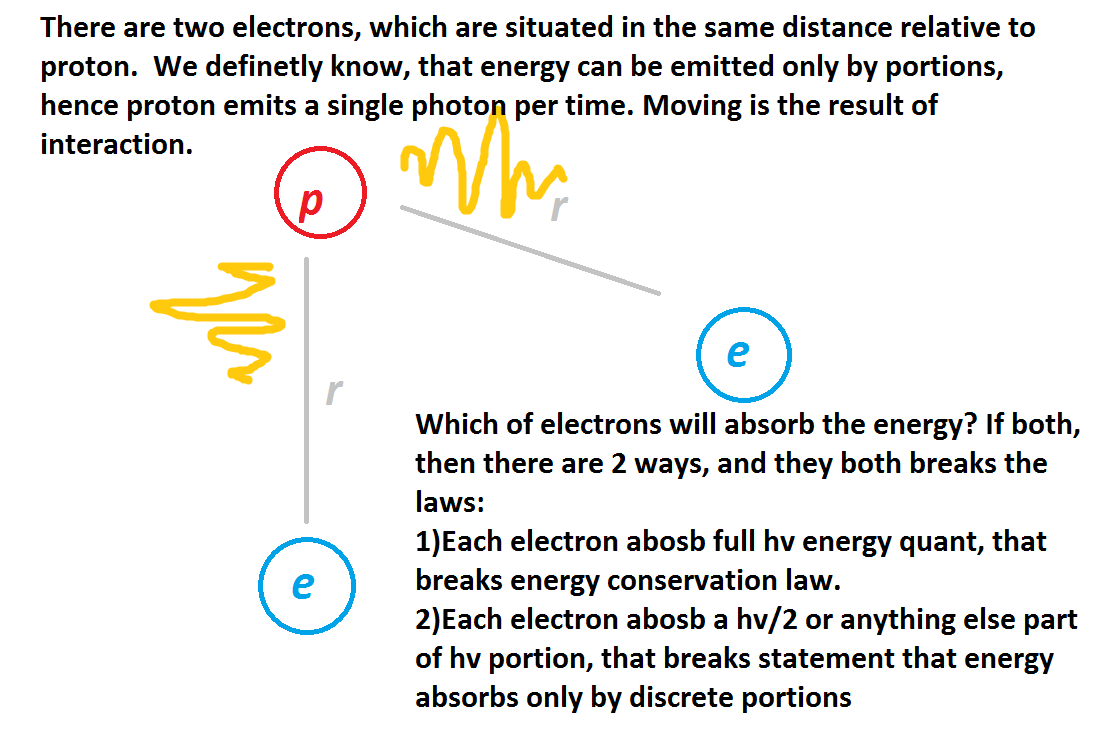 A key problem with your setup is that "we definitely know... proton emits a single photon per time." This statement is incorrect.

As long as the overall virtual particle field is ultimately conserved, you can have any number of particles with all sorts of parameters. When you run the math, you end up with a distribution that looks just like a classical field. They are constantly being created and disappearing again.

It's when one of these interacts with some other object that all the magic happens. In your example, consider what happens if one of the infinity of virtual photons interacts with the electron. In that case the electron gains (negative) momentum and starts to travel towards the proton. But now the proton is lacking one of the photons that would have balanced out the other virtual particles, so now it has leftover (positive) momentum and starts moving toward the electron. Mutual attraction.

First, protons, because they have EM charge, do interact with the photon field, but that interaction is described as being mediated by virtual photons. These are a mathematical way of describing how the two, the EM and the photon field are interacting.

Now you are asking about real photon absorption. Protons can interact with photons:

Now in your case, protons can absorb photons, but not in the visible wavelength range. A proton is a composite object and it does have energy levels, but those energy levels where the proton can be excited are ing the GeV range, so only gamma rays can excite protons.

Now let's say that in your case a proton is excited by a gamma ray photon, so the photon is absorbed, and the proton is then relaxed, and emits a photon.

You are saying that this photon needs to be absorbed by one of those electrons that you show.

You are asking which electron will absorb the photon. It is all probabilities. Yes it is possible that both electrons will be excited by one photon.

Either of them, but only one.

3
How much virtual photons does an rest electron emits instantly, per time?