Can you outrun a photon inside the event horizon of a black hole?

I was watching the YouToube video How Time Becomes Space Inside a Black Hole, by PBS Space Time, about how space and time flip within the event horizon.

The way the narrator seems to explain it, the geometry of space and time become so warped in a black hole that time can be "traversed" as it it were a spatial dimension.

Often times there are caveats or other things to consider when learning about physics through YouTube videos. So I wanted to ask a specific question here:

If I were to fall below the event horizon of a black hole with a jetpack and a flashlight, could turn on the flashlight then use the jetpack to accelerate past those photons?

No. In your local vicinity, you'll still be in a perfectly good frame of reference where the laws of physics are obeyed. In this case, maybe intuitively, you can consider that the photon that you want to outrun has had its notion of spacetime "flipped" in exactly the same way that you have. It still has a constant speed that is faster that yours. It doesn't know that it's inside the event horizon. (Maybe you don't either.)

The idea that space and time "flip" is only something that makes sense when the spacetime is viewed globally.

The way the narrator seems to explain it, the geometry of space and time become so warped in a black hole that time can be "traversed" as it were a spacial dimension.

A glimpse to the figure was enough for me. The statement "space and time flip within the event horizon" is a misunderstanding of what really happens. Let me try to explain.

To begin with, it is generally incorrect to speak of "space" and "time" as separate entities within GR. It is one of its distinctive characters that only spacetime is physically meaningful (exceptional cases apart).

Here we are talking about Schwarzschild's geometry of an uncharged, non-rotating black hole (the simplest kind) which has an event horizon. Understanding spacetime below (or beyond?) this horizon is far from simple.

Generally speaking, spacetime is a 4-dimensional manifold, i.e. 4 coordinates are needed to describe it, to single out a point (an event) in it. Even outside the horizon Schwarzschild's geometry is different from SR's, which is also 4-dimensional, because Schwarzschild's is curved, not flat. This means that simple Lorentz-Minkowsky coordinates cannot be used, and that the "distance" (technically, the "metric") between two points has an expression somewhat longer to write and harder to understand.

I will content myself of saying this: the set of coordinates initially used by Schwarzschild and still in use are named $t$, $r$, $\theta$, $\phi$ and their names suggest an almost exact interpretation:

But this is still nothing. The hard thing is that this coordinate system does not work for the whole spacetime: there is an apparent singularity at $r=2GM/c^2$ (the Schwarzschild radius): something goes to infinity in the metric formula for that value of $r$. Moreover, $t$ goes to infinity at the horizon. These unpleasant features were noticed as soon as Schwarzschild published his solution (1916) but a full understanding of their meaning and a satisfactory solution thereof had to wait more than 40 years.

It is now widely known that $r=2GM/c^2$ is not a real singularity of spacetime. Several sets of coordinates have been discovered, having no bad behavior at that $r$-value. A true singularity of Schwarzschild's spacetime actually exists, but for $r=0$: this cannot be avoided by any choice of coordinates.

Two facts I must still recall. The first is that although the Schwarzschild radius is not a singularity proper of spacetime, it represents a horizon. I cannot explain fully what this means, but one thing is known to almost everyone: a body which crosses the horizon cannot come back, out of the horizon. It is doomed to fall into the singularity at $r=0$. Even light emitted by such a body will not come out, but will also fall into the singularity, faster than the body (and this answers your question).

The second is that Schwarzschild coordinates can also be used beyond the horizon, but with a profoundly different meaning for $r$ and $t$ (so profound indeed, that it would be better to use different symbols). For $r$ less than Schwarzschild radius, $t$ is a space coordinate, $r$ a time coordinate. This is wholly another thing from what the narrator says: it is not true that "time can be traversed as it were a spatial dimension", because $t$ is no longer time. I must insist: $t$ is just a symbol, a label. No physical meaning must be attached to it only because we are accustomed that the letter $t$ usually means "time". The physical meaning, if there is one, can only be inferred from its role in the metric, and the metric says that beyond the horizon $t$ acts as a space coordinate. The same (in the reverse) holds for $r$, which is a time coordinate.

I wish to explain this fundamental point in greater detail, giving some examples. If you are outside the horizon, in a spaceship, you can maneuver so that the spaceship stays still, meaning with this that all three space coordinates ($r$, $\theta$, $\phi$) remain constant. This is not strange, as the same happens in Newtonian physics. To accomplish it near our Sun, you only need fire the spaceship's rockets so that their thrust counterbalances Sun's attraction. The same holds near a black hole, until the spaceship remains out of the event horizon. On the other side, there is no way to "stop time": even if the spaceship stands still, time passes and the $t$ coordinate continues to increase.

Now put the spaceship beyond the horizon. Nothing prevents you from keeping the space coordinates constant: $t$, $\theta$, $\phi$. Actually no rockets are required, as this is a special case of free fall. But it is a free fall, and by this two things are meant:

So you see that the singularity is not in the center of the black hole, but in its future.

If you call "time" "space and one of the "space" directions "time", you can outrun a photon by sitting still. You will have moved through "space", but your "time" coordinate will not have changed. Thus you are moving at an infinite speed, while the photon always moves at $1/ c$.

Renaming "space" and "time" doesn't change what you experience, although maybe it makes talking about it much more confusing. In Schwarzschild coordinates, this is what happens on the other side of the horizon. So after we fall through a black hole horizon, you won't be able to outrun photons.

What actually happens when you pass the event horizon is that, if you use Schwarzschild coordinates, one of the directions you used to call "space" is now time, and what we used to call "time" is now a spatial dimension. So now the future is in the direction of the singularity at the center of the black hole, and you can't avoid hitting it. There isn't actually real sudden change at the horizon of a black hole (except in Schwarzschild coordinates), so you won't actually notice anything when you pass the horizon. And you won't be able to outrun a photon in your own reference frame.

You can not, see the race of different velocity particles in Null-coordinates:

As you can see the pink dots representing the photons overtake all particles, even inside the black hole.

Although a particle will have a speed greater than c relative to the route, which is defined by its starting point at a fixed star outside the black hole and its end point at the central singularity (or, which is equivalent, by tachyons with constant r), while a photon will only have c even relative to route, the particles will still be overtaken by the photon, which still has c also relative to the particles.

One reason for this is that the route does not length contract, but length expand if you go faster than light relative to the route. For a comparison of v (the local velocity relative to the singularity) vs dr/dτ (the celerity) see this diagram, where the blue one starts from rest, the green one with the negative escape velocity and the red one with 0.9c (relative to the fiducional observer who is stationary at r=3GM/c²): 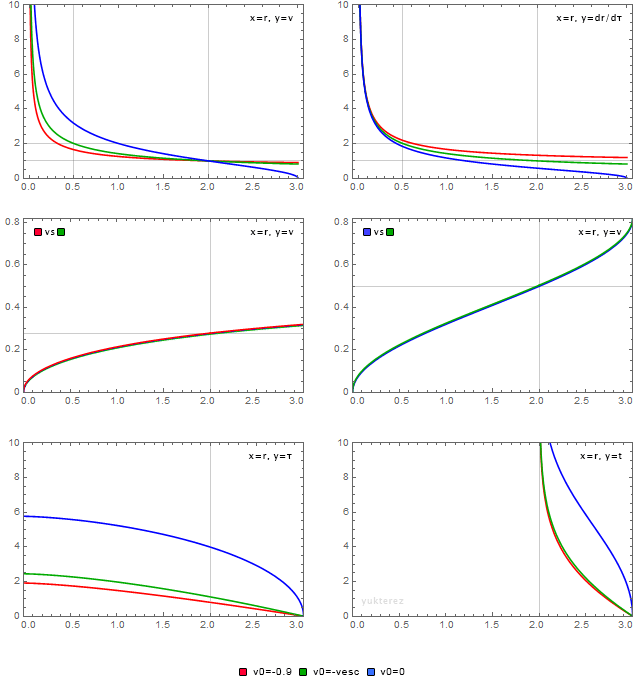 Not the answer you're looking for? Browse other questions tagged general-relativity black-holes speed-of-light faster-than-light event-horizon or ask your own question.