Why don't we use infrared light to heat food?

Why don't we use infrared (IR) or even the far IR just to heat food in a microwave oven instead of, of course, the conventional 2.45 GHz microwaves? Don't people call IR heat waves?

We do use (near) infrared radiation to heat food – whenever we toast food or grill (UK)/broil (US) by beaming infrared downwards on to food! The point is that the infrared is strongly absorbed by the food we cook in this way, and doesn't penetrate significantly beyond about a millimetre. So the surface of the food is strongly heated – seared, toasted or scorched! What lies below the surface is cooked much more slowly, mainly by conduction of heat from the surface.

Edit (prompted by comment below). I don't mean to give the impression that water molecules are the only ones that absorb microwaves. Fats are also strong absorbers.

That iron on the top of the device is a simple ohmic resistor, which gets the 230V network current directly. There is no need for any converter or stabilization of the temperature or the electricity, because

safely keeps the iron to around 700K, while it is in power. 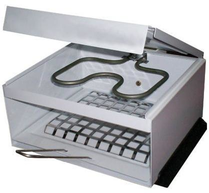 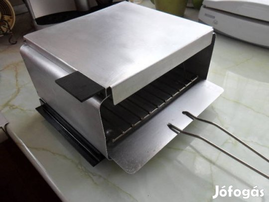 One reason is that although there are devices that heat/cook food primarily by IR, they only work well for specialized sorts of cooking. You'd probably get better answers, or at least ones that address quality results, by asking on the cooking site. However, I'll attempt a short answer.

The most common is probably the ordinary toaster, where you insert say a couple of slices of bread (or toaster pastries &c) into slots, push a lever, and heating elements toast the outside surface until "done", when the toaster pops the bread up and shuts off the heat.

If you've ever examined the result on anything but thinly-sliced bread - say a bagel - you probably noticed that while the surface is nicely toasted, the inside might be barely warm. That same principle applies to more general-purpose devices like the toaster oven. The IR heats the surface: the inside must be heated by conduction from it. This is generally ok for things like sandwiches, but generally doesn't do a good job for baking, or roasting things for a long time. You too easily wind up with a burnt crust surrounding an uncooked center.

You even see this with conventional electric ovens, which use a heating element on the bottom of the oven that is heated to a red heat, thus giving off lots of IR. Place your cookie sheet or pan of brownies too close to this, and you get burned bottoms and underdone tops. (I use a baking stone myself, which shields the pans from the direct IR given off by the heating element, and gives much better results.)

OTOH, as others have explained, if you simply want to heat food quickly, a microwave is much more efficient, and quicker. A greater fraction of the energy is transferred to the food, and throughout the volume rather than just at the surface.

Microwaves are absorbed by water, which works for the oven because most food has high water content. (If you had a completely dry food, it would not microwave well.) They also penetrate the food a bit, so you get heating throughout, which makes it fast.

Infrared ovens do exist, so that's also viable. They tend to cook on the outside more like a conventional oven. The ones that I personally know for homes are a variant of toaster oven in size and form factor. I don't know that there's any reason that it has to be that way. Search online. You'll easily find these.