Why do all the planets and stars in our solar system have such similar average densities?

This table lists the average density of all the planets in our solar system. We could also consider the Sun (average density 1.41 g/cm³) and Pluto (average density 1.88 g/cm³). The densest body (Earth) and the least dense (Saturn) only differ by a factor of less than 8. And if we neglect Saturn, the average density of the next-least-dense planets (Jupiter and Uranus) only differ from the Earth's by about a factor of 4. By contrast, many other solar and planetary properties range over many orders of magnitude. Is there a reason that the density is so uniform (by astronomical standards), considering that the planets' elemental compositions are so different?

All the planets and the Sun formed from the same protoplanetary disk, which explains why most of them have similar angular momentum (i.e. orbital and rotational) directions. But I don't see why this would lead to a uniform density. The rocky planets are made of elements that are fairly incompressible (both under pressure and temperature changes), so I can understand why their densities are quite uniform, but I would have expected the gas giants' densities to be highly sensitive to the planet's size and temperature, since the density of an ideal gas is proportional to its pressure (determined by the planet's total mass) divided by its temperature. Moreover, I would have thought that by far the most important factor determining a planet's properties is its distance from the Sun, but the density seems to depend quite non-monotonically on that distance - e.g. Saturn has only half the density of both its closer and its farther neighbor relative to the Sun.

Given that, we might expect the planets to follow two different mass-radius trajectories. The smaller planets basically have the density of what they are made of, with only a small amount of compression that depends on their mass. The gas giants are governed by an electron-degenerate equation of state that approximates to a $n=1.5$ polytrope. In the relatively low density regime (compared with a white dwarf) this results in an almost mass-independent radius and therefore a density that grows linearly with mass.

The two regimes are seen clearly in a mass-dependence plot for Exoplanets. 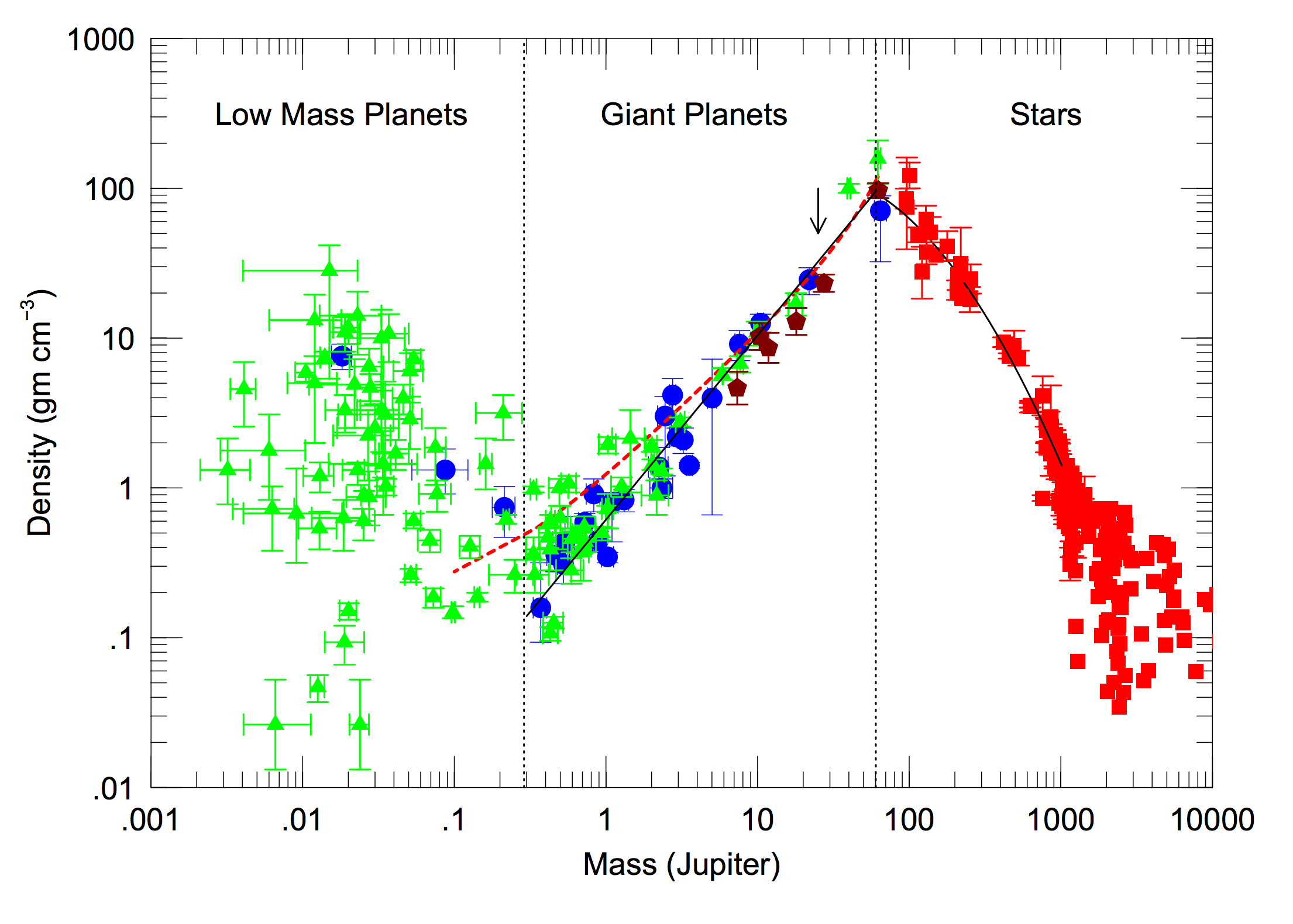 As you can see, some Exoplanets are much denser and the overall spread in density is more than two orders of magnitude. Thus the reason the planets in the solar system have similar densities is that (a) rocks do have similar densities and rocky planets are generally not massive enough to compress them much further and (b) the gas giants in the solar system are not very massive and the low-mass end of gas giants that can form have an average density similar to rocks.

There is further discussion that could be had about why (a) and (b) are true, which I may add to.

Given this table, the most signifcant factors affecting the density of elemental matter (matter organised into the elements) seems to be

1) whether the matter is gaseous or not, which seems to be a factor of around 50.

It is therefore suggested that the formation of the solar system and planets occured with either a relatively random distribution of these factors; and even some effects by which they act in a compensatory manner (such as described below).

In terms of composition the most abundant elements in the solar system are hydrogen and helium, covering 98% by mass. Due to the formation of elements in the early universe the most abundant elements all reside in the atomic mass range 1 to 28 (and the even numbered ones are more abundant) (as shown here). So density variation above 30 due to composition would be remarkably inconsitent with our theory of the formation of the universe.

Lighter elements need a stronger gravitational field to be retained, so it is only larger planets that can retain them. [For example, that's one reason we need to be careful about helium usage on earth, since it is inert it is not retained in compounds, and if released travels to the top of the atmosphere where it is blown away by the solar wind.]

Consequently it is smaller planets that tend to retain mainly heavier elements/molecules and are denser. Venus being an interesting because it is a small inner planet, but does have an atmosphere. Its remaining atmosphere is mainly $C0_2$, which has a high molecular atomic mass of 44, and is very around 100 times more massive and dense than the earth's.

As well as large planets in larger solar orbits retaining more lighter elements they have interiors that are under immense pressure; high enough to liquify some light gases. For example Jupiter is theorised to have a layer of liquid metallic hydrogen within it, one that extends out to perhaps 78% of the radius. Liquid hydrogen is nearly 800 times denser than the gas, (70.85 g/L, compared to 0.08988 g/L). By comparison the heaviest element, iron, has a density around 7800g/L (normally quoted as $7.8g/cm^3$), so this moves consideration moves us in the right direction but other effects are probably also involved. Note: Iron is also the most abundant element on earth, making up about 38% of its mass.

One effect is that tht if the body is massive enough to retain molecules of the light elements, then it is likely very large as light elements are the most abundant. Consequently it is likely that interior pressure will liquify a significant portion of these molecules, bringing the overall density back closer to that of smaller "rocky" planets that only retained solids (and maybe very heavy moleculed gases).

Not the answer you're looking for? Browse other questions tagged astrophysics planets density solar-system or ask your own question.

4
Metallic hydrogen and gaseous planets
12
The Solar System explosion in the Nice model
10
What's the cause of this gap in this simulation of the Nice model?
2
Planetary alignment of the gas giants?
4
Relation between average density of planets and their distance from the sun
0
How can gaseous Saturn be only 8 times less dense than Earth
2
What are the gravitational binding energies of giant planets?
0
Winds on gas giant planets: Would they increase if closer to their star?