Do color changing interactions between up and down quark exist?

Now my problem is that after an extensive search on google I‘m convinced that terms of this form should exist: an up and a down quark should be able to exchange their color charge via a gluon.

Is the mistake in the Lagrangian, which should respect terms of this form? How should it look like correctly? Or are there simply no such interactions? 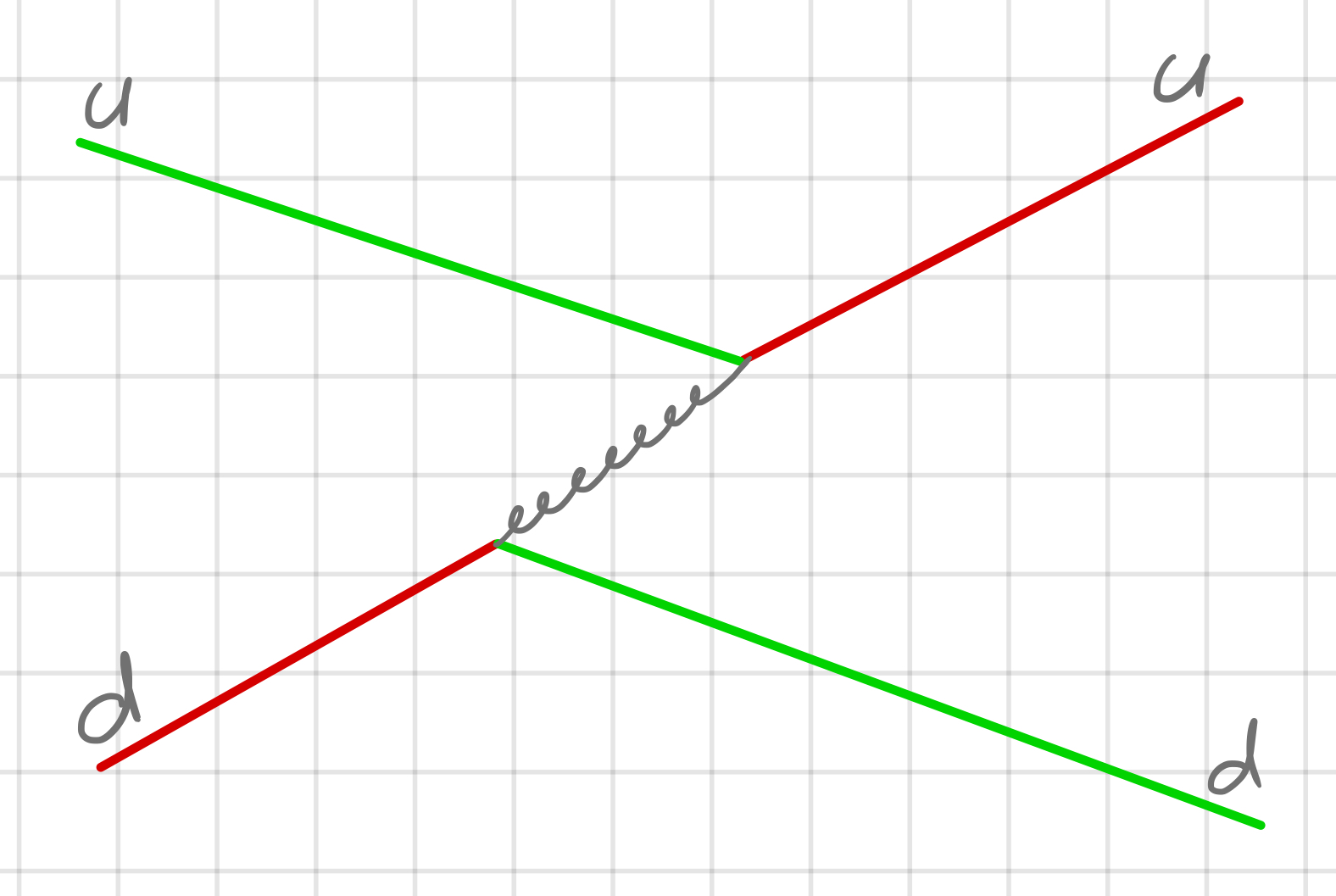 What the Lagrangian doesn't contain is a vertex which describes an up quark emitting a gluon and turning into a down quark (or the other way around). That would not be consistent with conservation of electric charge, for instance. The suggested vertex $\bar{u}_{L}\gamma^{\mu}i G_{\mu}^{a} \lambda^{a}d_{L}$ would describe such a process.

The diagram you drew is not described by such a vertex, but by the two correct vertices from the original Lagrangian, connected by a propagator. Look closely: in the diagram, there is a down quark emitting a gluon (corresponding to $\bar{d}_{L}\gamma^{\mu}i G_{\mu}^{a} \lambda^{a}d_{L}$) and an up quark absorbing one ($\bar{u}_{L}\gamma^{\mu}i G_{\mu}^{a} \lambda^{a}u_{L}$). The diagram contains two vertices, not one.

In short: it is possible for quarks of different types to exchange gluons and change color, but this does not happen within one vertex.

The strong interaction is not flavour changing so there is no local vertex that will do what you want. While the suggested interaction vertex is not permissible because it spoils the $\mathrm{U}(1)$ charge invariance, if you extend to the weak sector, you can have however a vertex of the form you wrote $$\sim \frac{g_W}{\sqrt{2}} \bar{u}_L \gamma^{\mu} d_L W_{\mu}^+ + \text{h.c}$$

but note this is a flavour changing vertex not a colour one.

Not the answer you're looking for? Browse other questions tagged standard-model strong-force color-charge or ask your own question.

3
How to find the Higgs coupling with a mixing matrix?
4
Do Standard Model Yukawa couplings depend on the gauge choice?
2
Up/Down Quark Color and Isospin
3
Does the Flavor symmetry forbid $uu\rightarrow cc,ss$?
3
Lagrangian of Yukawa Interaction and Quark Mixing
1
Can we visualize the standard model fermions as a 5-dimensional matrix with only the first 3 dimensions gauged?
4
Does it really make sense to talk about the color of gluons?