Is there an agreed upon physics definition of the term 'speed'?--for example, can it be negative?

The term speed is commonly defined as follows:

Then see: http://www.statisticshowto.com/scalar-definition/ Can a Scalar be Negative?

A number like -10 can be a scalar or a vector depending on what situation you are using it in. In linear algebra, scalars can be negative. A negative scalar like -10 would result in a vector in the opposite direction. In physics, scalars and vectors are defined by what happens to them during rotations. Direction is sometimes denoted with a + or – to mean the positive or negative direction relative to a reference point. In this situation, -10 would not be a vector as -10 would mean 10 units in the negative direction from the reference point. To avoid confusion, the word “scalar” in physics is sometimes limited to complex numbers.

For an example of confusion see: https://www.wired.com/2014/06/whats-the-difference-between-speed-and-velocity/

Also 'speed' is also often defined as the magnitude of the velocity vector, and it seems like this can lead to confusion.

See Does a resultant magnitude always have to be positive?

My question is: Is there an agreed upon physics definition of the term 'speed'? For example, can the speed variable be negative or does it have to be preceded by a negative sign?

Velocity is generally understood as a vector $v$ and speed as it's absolute value $|v|$, this means that it's always a positive value (where we think of zero being positive too).

If you take a component of velocity in a system of axes then this scalar value can take both positive and negative values - but it's not speed as such.

One possibility where we can have velocity reduced to speed - more or less - is if we look at a 1d system, for example a particle moving along a straight line (actually a curve is possible but a straight line is simplest). Then velocity here is more or less speed, except because it is still a vector (but also still a scalar) it can take negative values!

This example, by the way, shows the importance of lifting up in dimensions to see what a particular physical quantity actually is. For example, if we stayed with the 1d example, we would suppose velocity to be a scalar, whereas when we lift in dimension, we see it is actually a vector.

I have always heard and used speed to mean the magnitude of velocity.

Average speed would then be the average of instantaneous speed.

Note that this might be different than the magnitude of the average velocity (i.e. the average of the instantaneous velocity).

The magnitude of something (real number, complex number, real/complex vector) is always a positive real number (in the usual usage of the term magnitude).

Since magnitudes are real numbers they are always scalars, albeit they are real positive scalars, a particular subset.

I don't see any potential ambiguity in any of these points.

Sometimes when we treat 1-D kinematics problems we can forget the fact that displacement and velocity are vectors and just assign numbers to them. If we want to be really pedantic we can note that the real numbers are in fact a 1-D vector space, so these numbers we are assigning can in fact be thought of as vectors. But this is not important. We just have to note that it is possible to assign a velocity of -10 m/s to an object and note that since the magnitude of $-10$ is equal to 10 then the speed of this object would be 10 m/s.

edit: See Speed Wikipedia page. Also for completeness I note that for a vector velocity we have

This holds because $v_i^2$ must be positive and we always take the positive root. in the 1-d case we have

so the former often exceeds the latter.

can speed be negative?

One way of answering this question is to trawl the literature and use the Google search engine to help with the process.
In particular when looking at images of speed against time graphs negative speeds were not seen to be plotted.

My conclusion is that most authors regard speed as the magnitude of the velocity and I thought that the following pair of graphs sums this up quite nicely. 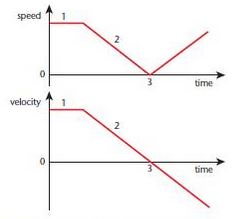 I thank @jgerber and @PhilipWood for pointing me in the right direction.

Not the answer you're looking for? Browse other questions tagged kinematics terminology velocity definition speed or ask your own question.

1
Differentiate b/w scalar and vector in Newtonian mechanics
0
Tangential Velocity - vs - Tangential Speed
4
Can magnitude be negative?
0
Speed and tangential acceleration in pendulum motion
3
Terminology for time derivative of speed (not velocity)
2
Suppose there is a vector $\vec v$ which is a function of time, then will $\dfrac{d}{dt}|\vec v|$ be a vector quantity or a scalar quantity?
2
Is the relation "slope=velocity" mathematically valid?