Is it possible to understand the Gyroscope Effect Intuitively?

Yes, there is a way to understand the gyroscopic effect intuitively.

In an answer here on stackexchange that I wrote in 2012 I presented a discussion of gyroscopic precession, (the explanation is illustrated with two pictures.)

This dicussion does not invoke mathematical concepts. Also, the concept of angular momentum vector is not invoked.

The discussion in that answer is an abbreviated version of a discussion that is on my own website.

The reason is because the wheel is spinning (hear me out). You have to keep in mind that the particles on the wheel have some velocity, and when a force is applied it changes that velocity, but this doesn't mean the velocity becomes aligned with this force.

This video by Michael Stevens at VSauce does a good job at explaining this https://youtu.be/XHGKIzCcVa0

However keep in mind that these explanations really only work for gyroscopes spinning quickly enough for this effect to take place. If the wheel is spinning too slowly it will fall over.

Let's say you try to turn a spinning flywheel ("gyroscope") 180 degrees by holding its axis while a friend closes his eyes. You don't tell him what you are doing and the wheel looks the same on both sides. If you ask him what you did after he opens his eyes, he might say you stopped the wheel and then started it in the reverse direction, because now it's going in the opposite direction, as far as he can tell. The energy lost due to stopping the flywheel and then restarting it in the opposite direction is equal to the energy required to turn it 180 degrees (I think...someone please check me on that). Things that are in motion want to stay in motion. Falling downward is turning it 90 degrees. According to the above reasoning, that would be like expecting it to change it's speed on its own, in violation of Newton's 1st law.

The above assumes conservation of energy and newton's first law are intuitive. There's another way to view it, if you feel an ice skater pushing her arms out to slow down is intuitively obvious: if it were to start falling down, the top and bottom would get further from the center without slowing up.

I will explain it with much more intuitive vectors like force and velocity.

First of all, this seems very unintuitive at first. instead of falling down, it keeps spinning.

But, if we consider the forces and velocities, this becomes very very intuitive. It is the same reason why a satellite in orbit does not fall down.

For example, consider the motion of moon around the earth.

The force of gravity is pulling the moon down. But, instead of falling directly to the ground, it revolves around the earth. Why?

Because the resultant velocity is the vector sum of the initial velocity and the Force acting on itm As shown in the figure below. 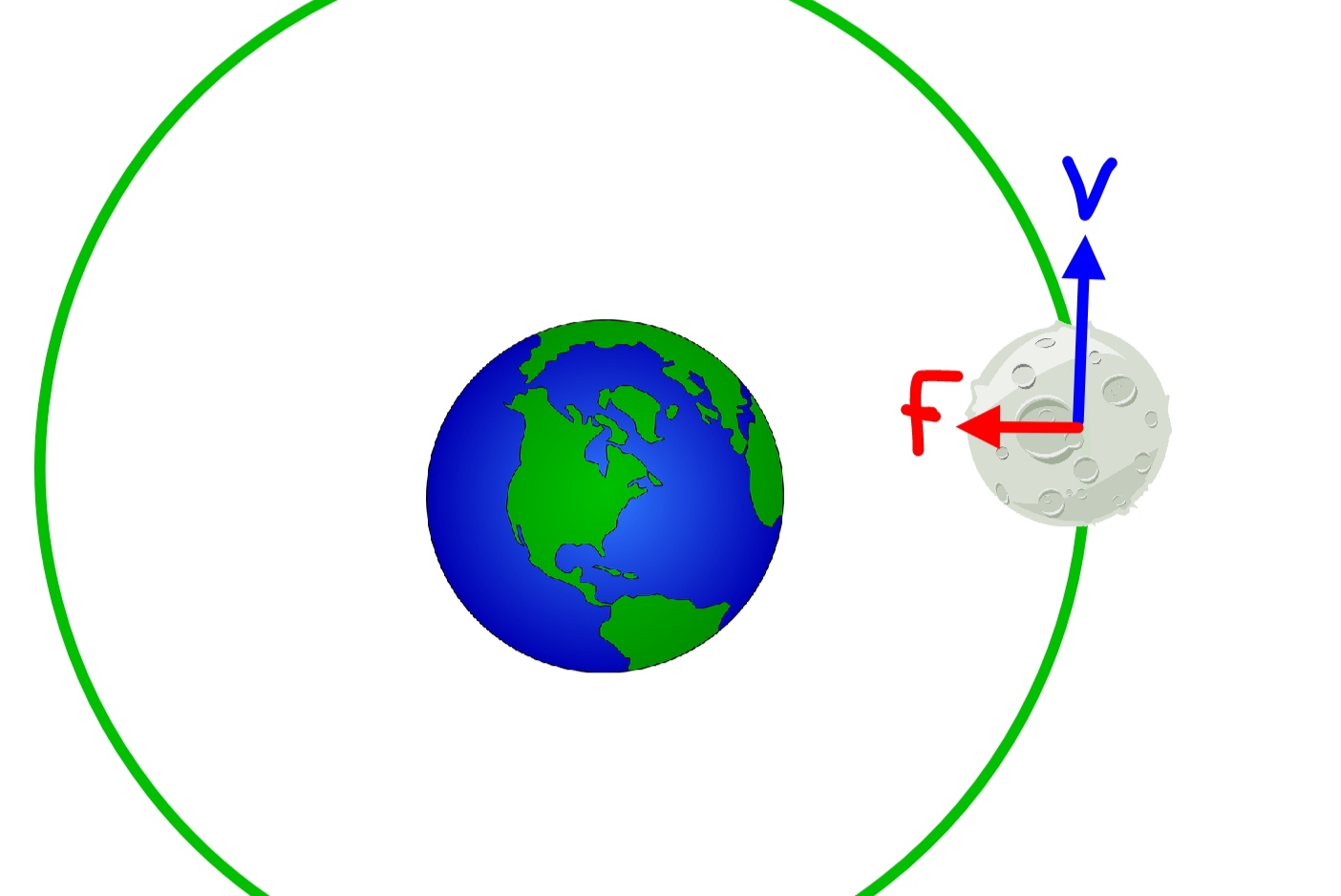 So the velocity is shifted towards the force. This happens again and again, keeping the moon in orbit. 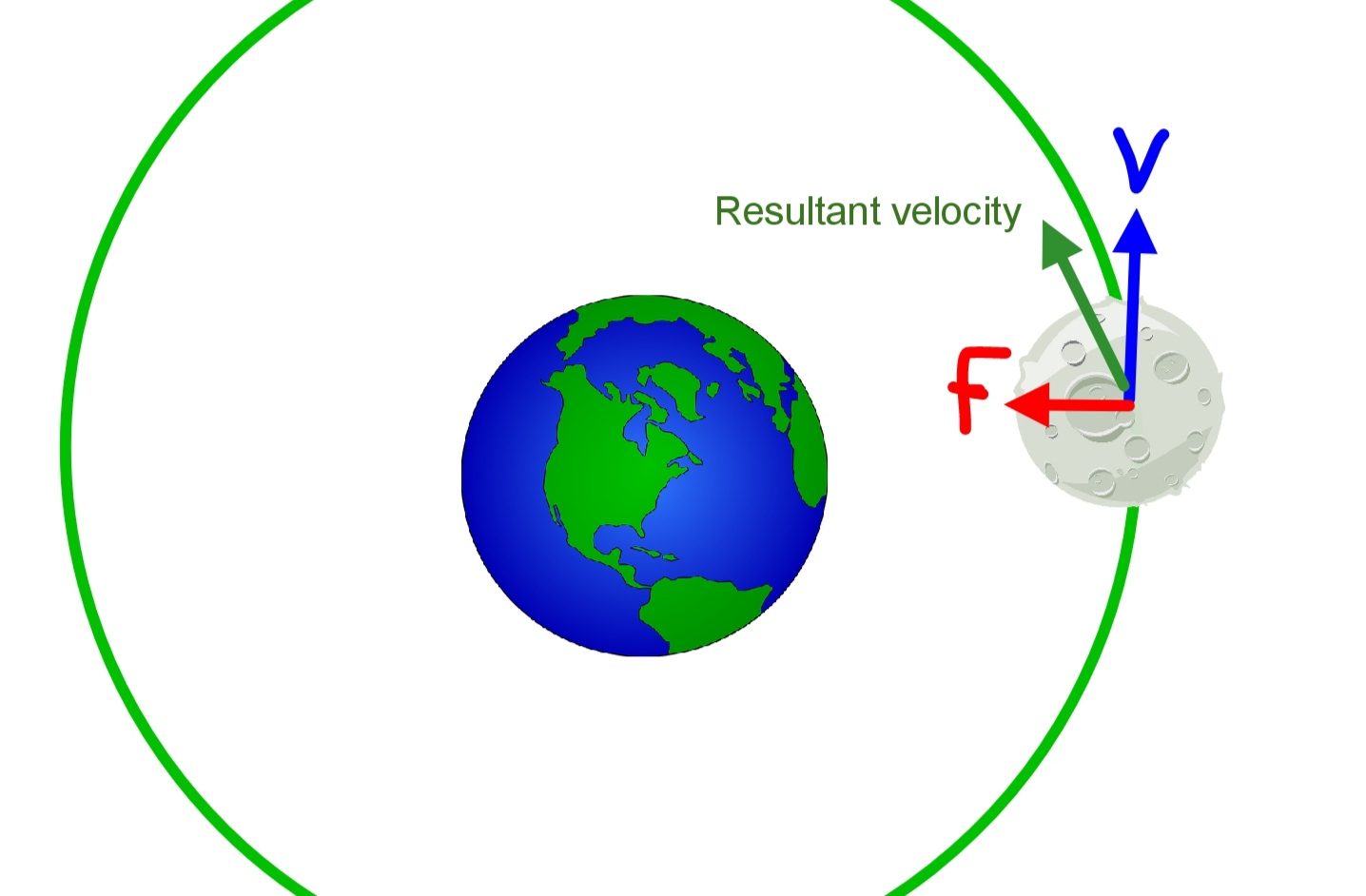 This happens because the Force acted is perpendicular to the velocity .

Same effect happens with the wheel.

When the wheel is released, the force of gravity applies a torque on the wheel.

The effect of this torque is like two forces acting on the opposite ends of the wheel, one downwards and one upwards but both perpendicular to the radius. 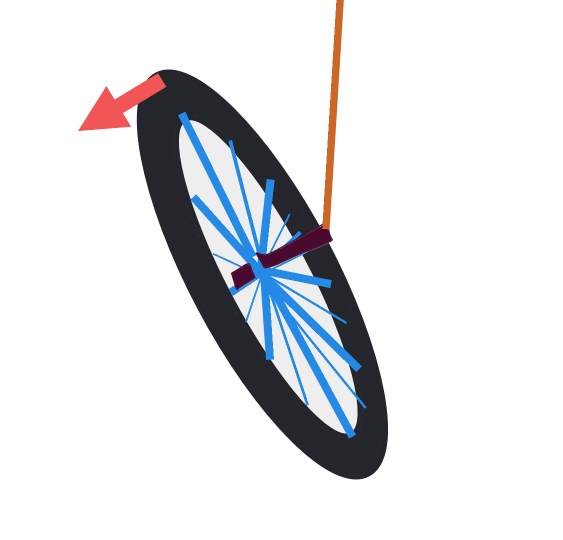 This is what you see if you look from above: 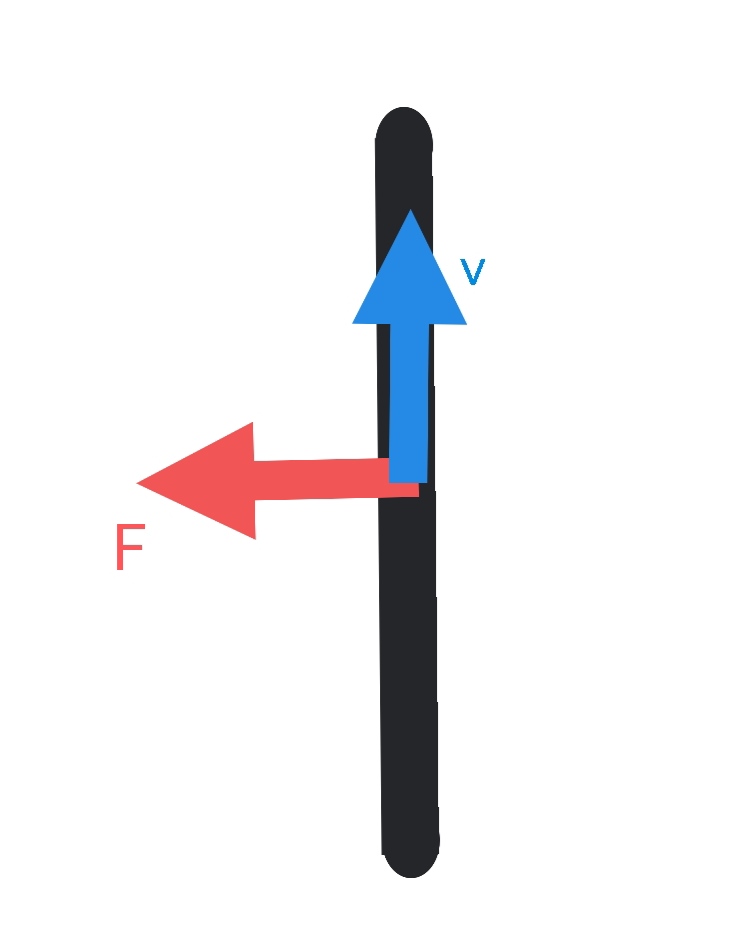 The force is perpendicular to the velocity.

Guess what will be the direction of the resultant velocity? 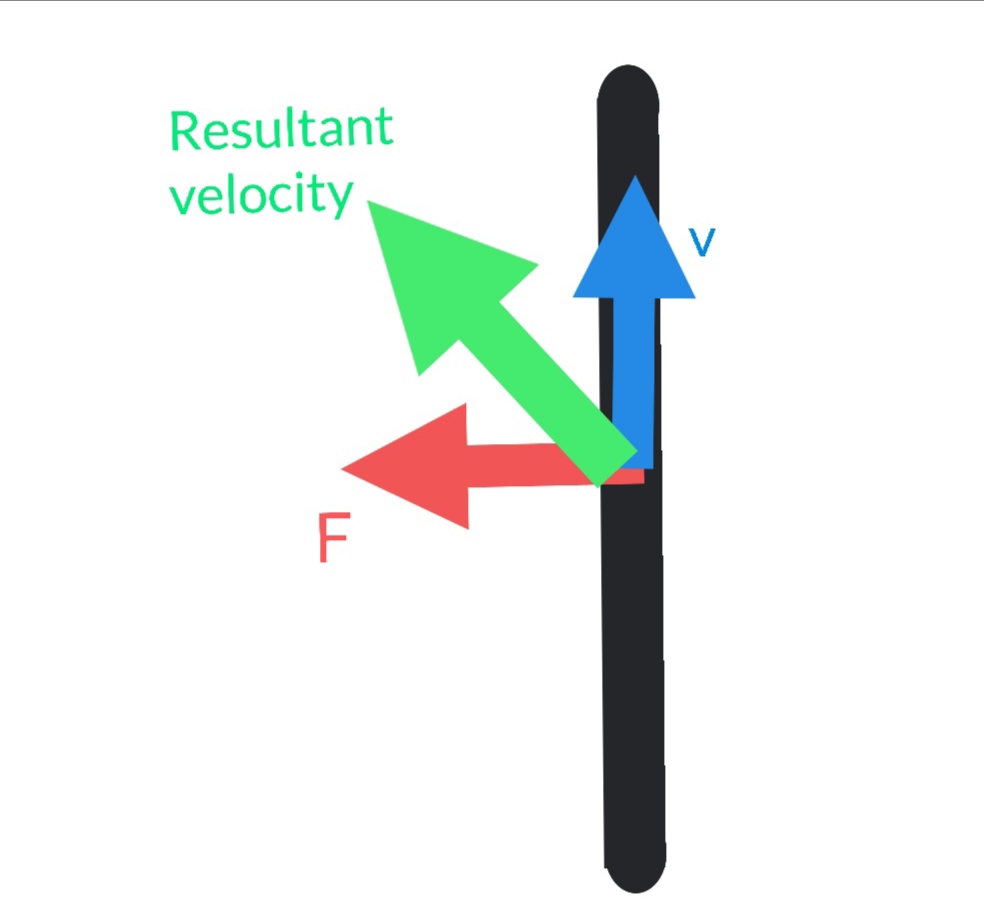 The resultant velocity is the vector sum of initial velocity and the applied force. This applies to all the particles in the wheel hence the wheel turns in that direction 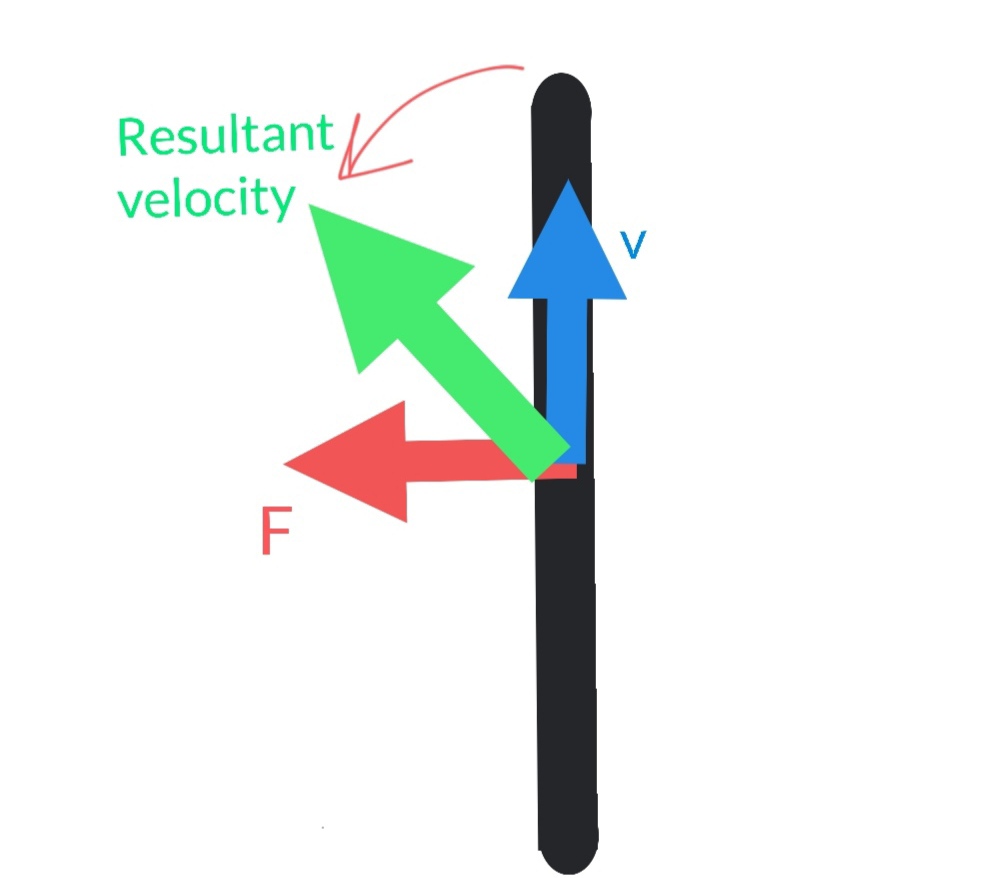 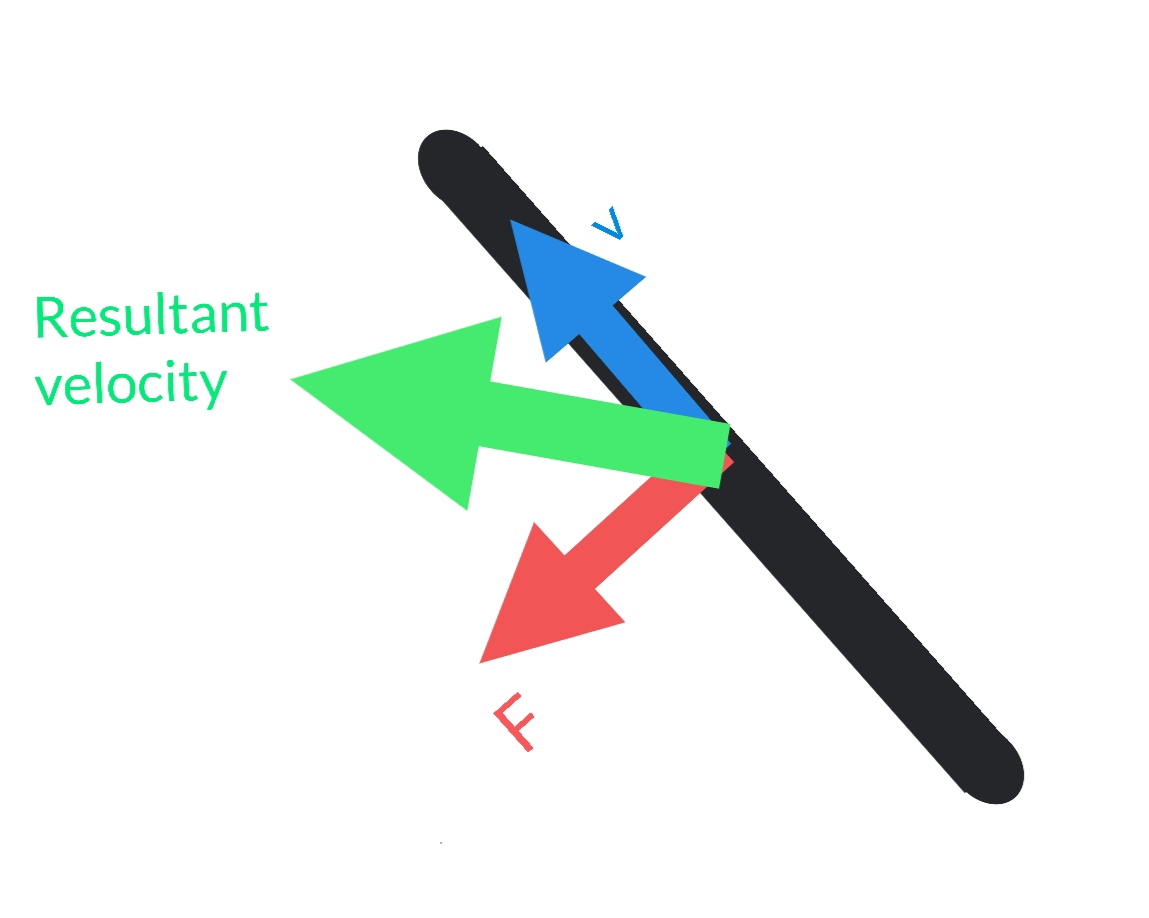 This happens again and again making the wheel move in a circle.

Not the answer you're looking for? Browse other questions tagged newtonian-mechanics rotational-dynamics rigid-body-dynamics gyroscopes or ask your own question.

29
Why don't spinning tops fall over?
13
How do you explain spinning tops to a nine year old?
15
What determines the direction of precession of a gyroscope?
2
Gyroscope precession
0
Intuitive derivation for the precession rate of a spinning wheel

4
Understanding gyroscopes
0
Which force acts as centripetal force on gyroscope?
1
How to relate spin speed and time in which a gyroscope falls beyond some angle?
3
Tension in a rotating object
0
Impulse on a Gyroscope
1
Gyroscopes and Conservation of Angular Momentum
2
Why can a gyroscope go upright for a while, after losing some energy?
1
Torque in a rotating wheel about a axis
1
Is it possible to obtain an Inertial Measurement Unit (IMU) (accelerometer+gyroscope) placement inside a black box through experiment?