What dictates how the Higgs boson will decay?

As far as I know the higgs boson has been observed to dacay into gamma ray photons, the Tau, b quark and maybe top quarks. But what are the factors that govern what particles it will decay to? And are there any other gauge bosons or fermions that the higgs boson might decay to in theory that have not been observed yet?

I'll try my best to give an answer to this. Corrections and additional comments are welcome.

Considering only the standard model:

Basically possible decay products of a particle x are determined by the interaction lagrangian of the particle. For the Higgs boson $H$ coupling to a particle $\Psi$ such a term more or less looks like $$\mathcal{L}_{int}\propto m_\Psi\Psi\overline{\Psi}H$$ This means that the Higgs boson couples directly only to massive particles hence it can decay into a particle ($\Psi$) antiparticle ($\overline\Psi$) pair if $$0<m_\Psi<\frac{1}{2}m_H$$ Such an interaction looks like this: 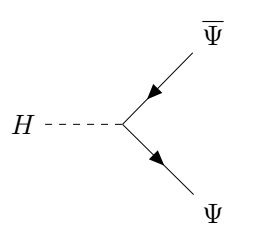 The incoming Higgs decays into a pair of massive particles.

However this does not explain how the Higgs can decay into two photons since those are massless particles and therefore should not couple to the Higgs since this only represents the first order interactions. To higher orders also the interactions of the first order decay products have to be taken into account. If these decay products have an electric charge (like quarks for example do) they couple to the photon. This leads to the Higgs having an effetcive coupling to the photon via virtual loop particles.

As feynman diagram the decay of a Higgs particle into a photon looks like this: 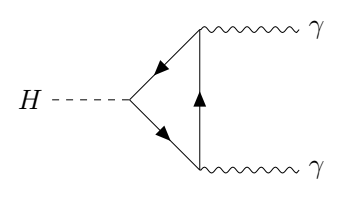 The triangle is a loop of virtual particles which basically can be every particle that has a mass and therefore directly couples to the Higgs boson. The condition that $m<\frac{1}{2}m_H$ does not apply for virtual particles (however the sum of the masses of the final state particles cannot exceed the mass of the Higgs but of course for photons this is the case...).

In the same way as the Higgs decays into photons it can for example also decay into a pair of gluons which couple to quarks inside the loop.

Interestingly due to this the only particles in the standard model that the Higgs cannot decay into (as final state particles!) are the $Z$- and $W^\pm$-bosons and the top quark since they are too massive. However they do occur in loops or otherwise as virtual particles. 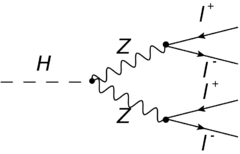 The decay into 4 leptons via $W^\pm$-bosons looks basically the same except that you have 2 charged leptons and 2 neutrinos as final state particles (or a combination of 2 up and down type quarks with the right charges...)

As far as I know all of these decays have been observed although I am not sure if the decay into light decay products like electrons has been observed yet since the Higgs does decay into heavy particles more easily.

Of course there is always the search for non standard model interactions but none has been observed yet...

I hope this was helpful. Additional comments are welcome.

16
Shape of the Higgs branching ratio to ZZ

1
Do the particles made in a collider exist outside the collider?
2
How is a Higgs boson created?
2
Terminology of Higgs boson and Goldstone boson
1
Where does the Higgs Boson fit in the three generations of charged particle?
75
Why do we need to “create our own” Higgs boson in order to see one?
1
Conclusions of a possible decay of the Higgs-boson into $t\bar{t}$
1
Theory behind the experimental signatures of Higgs-Boson