Can a glass screen protector reduce the impact on a phone?

Glass screen protectors supposedly protect your phone from impact. A youtube comment by McZidanne sums up this idea pretty clearly:

The thing about tempered glass cover isn't the protection they offer. It's the fact that they give in easier than the screen, so when a surge of energy is released into the phone as a result of a fall, the tempered glass absorbs that energy and protects the phone from having to absorb it.

However logically with my limited understanding of Physics this does not seem to be a phenomenon I can understand. A thin hard object shouldn't be able to reduce the force applied on the screen nearly at all, or can it? At least a plastic screen protector is soft, and can thus (theoretically) change the angle of the force partially (even if too insignificantly to be useful), but something hard as glass seems to me to be even less capable of protecting against impact. Am I missing something about the material properties of tempered glass?

The thing about tempered glass cover isn't the protection they offer. It's the fact that they give in easier than the screen, so when a surge of energy is released into the phone as a result of a fall, the tempered glass absorbs that energy and protects the phone from having to absorb it.

To say that the glass "gives in easier" is a bit misleading, but this is the basic concept. To protect the real screen of the phone, one wants a protector that will absorb the shock from any impact, rather than that shock breaking the real screen of the phone. So, we want a material that is hard and tough so that it will withstand large impacts (i.e. dropping the phone from your hip on concrete). Tempered glass is harder and tougher than plastics, see figure 1 in the first citation below.

A thin hard object shouldn't be able to reduce the force applied on the screen nearly at all, or can it?

Yes, certainly! Appearances can be deceiving in nature, eh? For instance, a given weight of spider silk is stronger than steel!

Regular glass has about the same (see fig. 1) fracture toughness as commercial plastics. But tempered glass has a much higher fracture toughness than regular glass (that's the whole point of it), especially if they're chemically tempered rather than thermally tempered. Note that glasses generally have much larger hardness than plastics as well, so toughness is the dominant contributor to the material's ability to survive a fall, no matter how it falls.

I believe that the property of a glass protector, most relevant to the protection of the screen (as opposed to protecting itself from scratches or breakage) and separating it from a plastic protector is its stiffness or rigidity, i.e., its ability to resist deformation.

As pointed out by JMac in the comments, this (stiffness) helps spread an impact over a large area reducing the stress on the screen.

An easily deformable plastic protector would pass a localized stress right through and this is exactly the kind of a stress that is likely to break the screen.

How much energy can a material absorb (per unit volume) is given by the material's toughness, which is the area under the strain-stress curve up to fracture: 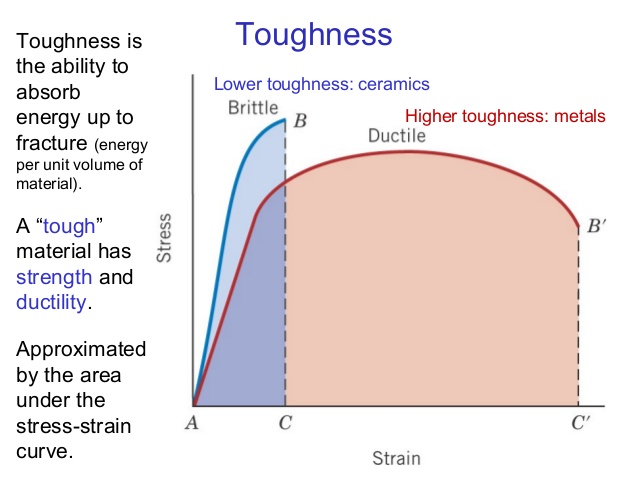 Not the answer you're looking for? Browse other questions tagged forces classical-mechanics material-science glass or ask your own question.

20
Why can one bend glass fiber?
3
Why can glass absorb ultraviolet light?
29
Do glass panes become thicker at the bottom over time?
10
Why iron sparks damage the glass surface but do not harm leather apron?
2
Why would a suddenly applied force have more impact than the same force being applied over time?
0
Why was the glass broken in the Lobby but not above the impact zone? - 9/11
0
Can a piece of glass get higher than the height the original cup of glass fell from?
0
Can a light block/reduce another light if projected in exact opposite direction?