Why is polarised light so bright? if polarizing lens are made to dim the light

I'm trying to learn about the physics of polarisation, which feels like an uphill battle. I've just read the notes from this page:

I'm having problems with the bolded writing below from the link above (I attached the diagram it mentions): 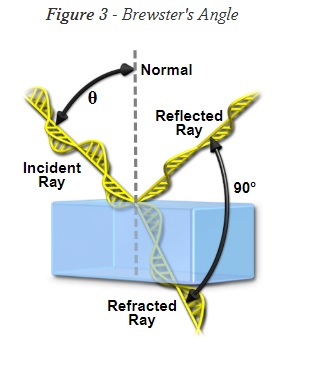 "The principle behind Brewster's angle is illustrated Figure 3 for a single ray of light reflecting from the flat surface of a transparent medium having a higher refractive index than air. The incident ray is drawn with only two electric vector vibration planes, but is intended to represent light having vibrations in all planes perpendicular to the direction of propagation. When the beam arrives on the surface at a critical angle (Brewster's angle; represented by the variable θ in Figure 3), the polarization degree of the reflected beam is 100 percent, with the orientation of the electric vectors lying perpendicular to the plane of incidence and parallel to the reflecting surface. The incidence plane is defined by the incident, refracted, and reflected waves. The refracted ray is oriented at a 90-degree angle from the reflected ray and is only partially polarized."

What does this all mean for brightness? When driving down the highway, why is the polarised light perceived so brightly? Wouldn't unpolarised reflected light have the same or more energy/intensity?

The polarized light you see in puddles of water or mirage, when driving on the highway, is a reflection from the sun which is why it's so bright. It's brighter than the rest of the light because it gets reflected off more reflective surfaces (puddles of water vs asphalt). The fact that it's polarized is merely a coincidence. Many displays (like the ones on LCD clock, for example) project polarized light which is much dimmer than the sun's reflection. It's the source of the light that makes the it bright, not the nature of the polarization.

The Brewster's angle boils down to the angle at which all light from the (polarized) incident ray is refracted, and none is reflected. So, to your first point, no, the refracted ray doe not gain energy as it gets refracted.

To your second point on orientation of the electric vectors, this illustration should help (a picture is worth 1000 words): 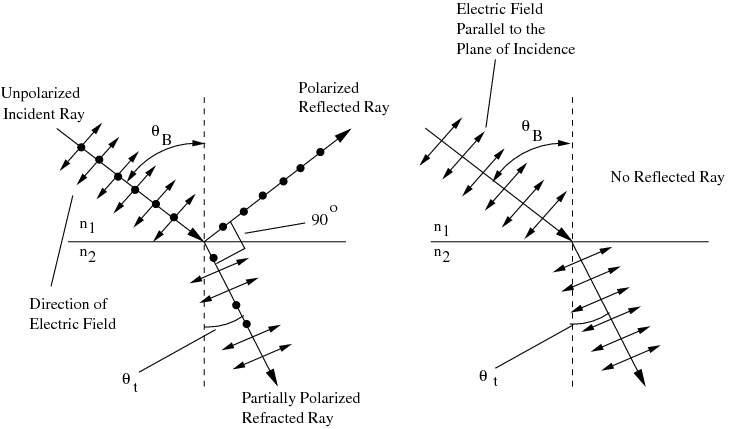 A polarizer rotates some portion of the incoming light and make it polarized and reflects or absorbs the other portion.

It is easy to prove this statement. Take two polarizer under 90° to each over and no light is going through. The polarized light behind the first polarizer can’t go through the second polarizer. Now place a third polarizer between the others under 45°. You will see (polarized) light behind this setup. To realize what happens, try to find another explanation for how polarized light goes through the setup of these three polarizers.

Firstly, does this mean that the energy of the electric fields (which were previously in different planes) culminate into the single plane, and thus that plane now possesses much more energy?