Rod connected to springs. Can this oscillate if the rod has no mass?

My thoughts led me to change the question's title. Here's what I've tried in solving the problem and led me to ask the question in the title.

We have the following diagram where the beam has no mass and can possibly rotate with respect to the wall. 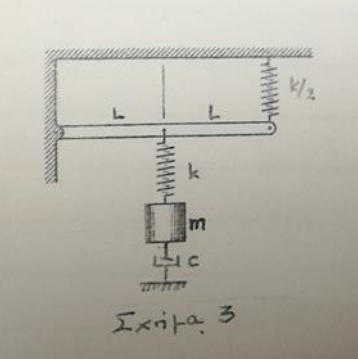 I'm trying to find the oscillation equation for the mass $m$. I'm a little confused as to what happens if the beam has no mass. The equations show me that the spring on top plays no part in the oscillation. I'm gonna list my thoughts :

1) Since the beam has no mass, all the forces and torques sum up to zero. Given that the beam is pivoted to the wall we know it makes no movement at all. If it did, then it would be constant which is not acceptable if the mass m is supposed to oscillate.

2) For the beam and its torques with respect to the point on the wall:

If we move the mass $m$ by $x$ then the torques give $(k)x(L)=(k/2)x'(2L)=>x=x'$ Which means the springs are extended by the same length any moment. This is strange given that the beam is not moving. I already think I've made some wrong assumptions.

3) Taking the forces acting on the mass $m$ we have: $$ΣF=m\ddot x=>\\-kx-c\dot x=m\ddot x=>\\m\ddot x+c\dot x+kx=0$$ which is the standard equation for a simple harmonic oscillation and the spring constant k2 doesn't appear which is strange again. Could it be that the spring's elongation somehow depends on something else ( the spring k2 or the beam for example ) .

Note: Every problem in this section of the book I'm following ends up in this equation : $m\ddot x+c\dot x+kx=0$ This one will be no different. If we assume that the beam rotates, we'll have to assume that the angle is minimal and do the following approximation: if the beam rotates an angle $φ$ then its center has moved a distance $φL$ - the right end , similarly, moves a distance $φ2L$. In that case we'll see that $x'=2x$ which contradicts the $x=x'$ relationship we found above. That is because previously I assumed that the beam remains horizontal.

All in all, I keep making assumptions. Please, a force analysis on the mass m would help me a lot. It's no homework, I've been on this for too long and I just can't skip it and go to the next exercise.

I'm gonna give it another go assuming that the beam has an angle after we move the mass m. I will upload when I'm done.

Let's say the bottom spring is spring 1 and the top spring is spring 2. When we move the mass m by $x$ the rod rotates by an angle $θ$, thus reducing the extension of spring 1 approximately by $θL$ but extending spring 2 by the same amount.

Since the beam has no mass, all the forces and torques sum up to zero. Given that the beam is pivoted to the wall we know it makes no movement at all. If it did, then it would be constant which is not acceptable if the mass m is supposed to oscillate.

1
What techniques can be used to analyze a rod rotating about the edge of a table?
6
Effective mass in Spring-with-mass/mass system
1
Three-mass, two springs coupled oscillator NOT attached to walls
0
Does this massless spring affect the system?
0
How to analyse this mass-spring system
0
Problem using lagrangian
1
Simple harmonic motion with pulley with mass
1
Lagrangian of point mass on rod inside ring with holonomic constraint