Is the force which throws a body on a rotating disk outwards centrifugal force?

If some object is kept in a radial groove made on a disk and the disk is rotated with say constant angular velocity.

Now as we know that the object moves outwards ie away from the centre of the disk. I want to know which force is it which throws the object outwards.

As centrifugal force is a pseudo force and hence when the observer is in ground frame it shouldn't be present so which force exactly pulls it out.

No force throws it outwards.

There is also no force pulling it inwards. Therefore it doesn't follow the circular motion. Such a force would have been friction for example. Instead it just continues straight ahead, away from the disk.

All in all, when an object has a speed, then it keeps going at that speed until a force pulls in it. Like a spaceship drifting forever at constant speed effortless. When the object in the disk has an initial speed, and the disk's angular speed is suddenly set too high for the object to follow, then the object will tend to continue straight ahead with this speed. And that means away from the disk.

The fact that it is stuck in a groove may push on it from the sides. But the fact that it moves outwards at all is due to the above describe tendency to continuestraight ahead with constant speed.

For the following discussion, let's assume there is negligible friction present in the system.

You are correct in saying that when we are looking at the object from an inertial frame (let's say we are the ones who started spinning the apparatus) then there is no centrifugal force. Correct me if I am wrong, but I think the essence of your question lies at how do we explain in our inertial frame why the object moves outwards when there is no radial force pushing it outwards.

One thing to keep in mind that there is a force acting on the object. This is the force supplied by the groove in order for the object to keep moving along with the groove at the same angular velocity. This force always acts perpendicular to the groove, so this force is always changing directions in our inertial frame.

Now, let's consider some small change in time. The direction of the groove changes, but our object has inertia. The velocity cannot change to be perfectly perpendicular to the new groove position due to inertia (mass) of the object. Therefore the velocity picks up a component that is parallel to the groove. This is the "centrifugal force" in the inertial frame. It is the inertia of the object along with it being constrained to rotate along with the groove There is no force that can make this component go to $0$ in this system, so the object cannot travel in a circle.

So to summarize, the centrifugal force itself is just from the inertia of the object. The object wants to keep moving tangent to the circle, which would mean moving away from the center of rotation. At the end of the day, even though some might dismiss the force acting on the object supplied by the groove, this is actually the only force acting on the object in our inertial frame, so it is this force that must be responsible for the entire motion of the object.

Something that has been bothering me for a while is that this does not explain why the object's speed outward from the center of rotation increases so drastically. After trying to simulate this system from just using the force applied by the groove, I have realized that the tremendous increase in velocity outwards comes from the fact that the force applied to the object by the groove is not constant in magnitude. This is because as the object moves outward, the torque the object applies to the disk increases (the force is the normal force, and the distance from the disk center is increasing, hence $\tau=Fr$ is increasing. If you specifically do the work out the torque must be $\tau=2m\omega r \dot r$).

This means that whatever agent is causing the disk to rotate at a constant angular velocity must be increasing its applied torque so that the disk remains rotating at a constant angular momentum. Therefore, the object experiences a force that is increasing in magnitude while changing direction around the disk. This is where the extra energy comes from that allows the object to drastically increase in speed. In the rotating frame, this force is exactly canceled by the Coriolis force. However in our inertial frame it is this increasing normal force that causes the object to pick up speed as it moves out. In fact, if the disk starts at some initial angular velocity and is left on its own, the angular velocity decays towards $0$ and the object will move away from the center of rotation at a constant velocity due to the lack of the "centrifugal force".

There is indeed a force acting on the object in the groove. That force comes from the rotation of the disk - it pushes the object in a direction perpendicular to the radius the object lies on (the direction is tangential to the "expected" circular path).

From there, the Coriolis effect takes over. The force acts in a linear direction. The fact that that direction is continually changing doesn't erase the fact that it only has one direction at any given instant. That direction is not "around the circle", it's pointed at the outside edge of the disk. The object moves "outward" because any force vector which is perpendicular to the radius which the object is lying on is necessarily tangential to the circle which the object would move in if it was attached to the disk. Tangent = away from the center, and away from that circular track. This is the Coriolis effect - objects given a linear impetus across a rotating surface appear to follow a curving path toward the outside of the rotation.

Coriolis is an effect, not a force, but it only exists where forces exist. The effect is that forces appear to act in unintuitive or surprising directions, though instantaneous momentum is always strictly linear.

If we're talking about circular grooves, and everything is perfectly frictionless, then the rotational force isn't transferred to the body resting in the groove. The disk would turn under it but none of that motion would be transferred to the body because its own inertia would keep it at rest in its original spot. If no force causes it to move at all, then, it won't have any tendency to move toward the outside of the disk.

Everything with velocity wants to go in its straight line, anything that pushes it offline or in a circular motion will feel a resistance or inertia and technically it's not a force but that's where the term came from.

This depends on what reference frame you are looking at.

From the viewpoint of someone sitting on the disk and riding along with it - i.e. like a kid on a merry-go-round (though sadly it seems such have been removed as a result of creeping mullycuddle but that's neither here nor there) - then yes, indeed the increase in distance of the particle from the disk's center is accompanied by a measurable acceleration and thus by Newton's second law reflects the presence of a force.

From the viewpoint of someone sitting on the ground or at least not rotating with the disk, the body moves in a straight line, with constant speed (i.e. ignoring other forces like gravity) after it is released. In this frame, there is no force after the body is released because in straight-line uniform motion there are no forces acting pretty much by definition, instead its distance increases from the center simply because it is moving away. But before it was released, and when it was circling on the disk there was a force - namely that which is accelerating it on its curvilinear path - and then when the ball was released, that force stopped.

In fact, the latter force is present in both scenarios. In the first scenario, the person sitting on the disk, were sie to be holding the object, would have attributed it to having to "try to pull it tight to keep it from 'wanting to fly away'". Since this is an actual exertion by hir own muscle power, both observers must agree it's happening since such a thing cannot be just made to go away by a simple coordinate transform, requiring a complex rearrangement of molecules in muscles, brains, etc. . Thus it must be a real force, and that force is the same one which in the second scenario is being exerted - in the same direction, i.e. toward the center - to keep deflecting its velocity around the circle.

The only difference is that due to the different vantage point, one interprets it as trying to "keep the ball from fleeing" while the other thinks it is exerted to "deflect it from its straight line motion".

But nonetheless, both are equally valid ways of looking at the same scenario, and both can be reconciled by noting that for the person sitting on the disk hir situation of forces must be different because to hir sie is stationary, while in the case of the external observer sie is moving. Nonetheless, the same motion, same exertions and other invariants must be preserved between both. I suppose there is some philosophic issues involved here, as there always will be when you dig into it, but this is basically the reasoning behind one common philosophic view and at least behind the apparently differing observations and their relation which you will still have to accommodate no matter your philosophy of "reality" (i.e. ontology).

And yes, for the question, this outward force seen by the observer standing on the disk is centrifugal force. Whether it's a "real force" or not is not relevant to that - that is the name which refers to that particular thing.

Rotational motion is just the movement of a points which have velocity they works bonds (centripetal) force. Because you have chosen the disk will be very easy. Disk is flat object with a lot symmetrical axes and it does not matter for calculations which symetri axis we choose. I have simplified the rigid body to two-dimensional model on the surface XY with five masses, two symmetrical on each axis and one in the center of the mass. All masses are equal $m_1=m_2=m_3=m_4=m_5$. The angular velocity is perpendicular to this body $\vec ω (0, 0, z)$ . 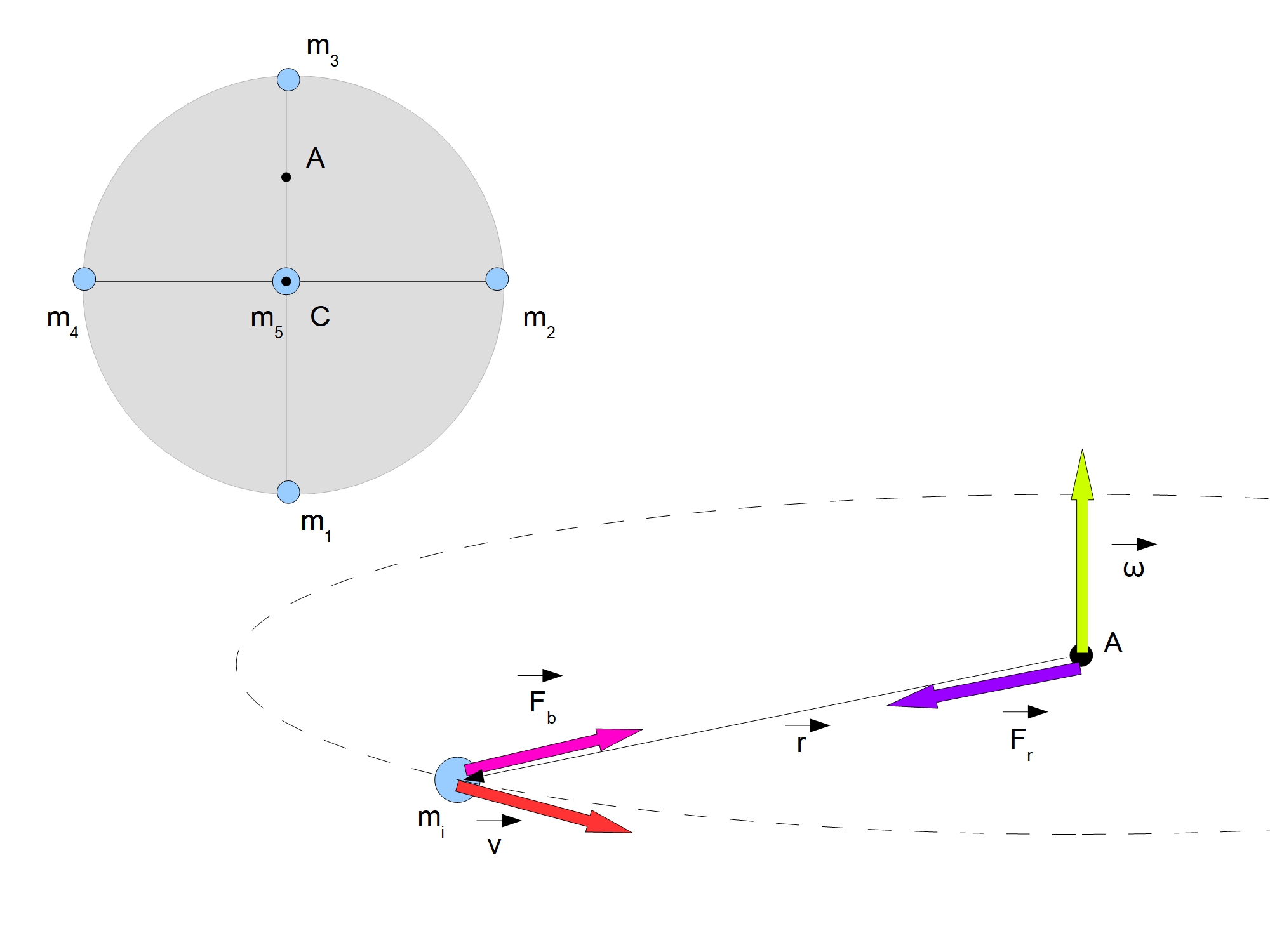 1
If I kept a body in a groove on a frictionless circular table, and rotate the table with a constant angular velocity, what will happen to the block?
0
What forces make objects fly away from the axis of rotation?
0
Direction of Centripetal Force
3
Motion of bead on a rod