I am preparing for an undergraduate degree in Physics, with no teacher in sight until October. The textbook I am using to prepare myself, gave me the following exercise about electric current and left me beyond confused. I would really appreciate it if somebody could help out. 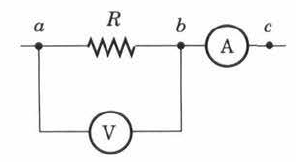 The voltage between a and c is identical in both scenarios.

Here I get stuck, and I need to know where my logic fails:
-Regarding the resistance of the Voltmeter, I have the current (0.00199 Ampere), but I have two different voltages, and they seem equally valid to be plugged into the equation I=V/R. In that sense, I would get two different results from the equation R=V/I. Now, resistance is dependent on ρ, L and A, and one could argue that the L changed here. Either way, I am left with the values R = 60301 Ω and R = 601380 Ω.

-Regarding the resistance of the Ammeter, I have the voltage for b-c (0.2405), but I need the current. Here, there are two options for the Current, but - again - they lead to different values for the Resistance (R = 0.5 Ω and 0.502 Ω respectively). However, in this case, there is no logical reason why the resistance would have changed, because there is no reason for ρ, L and A to have changed. Factually speaking, the Voltage is identical in both cases (0.2405), yet the current has changed: looking at I=V/R, that must mean that the resistance has changed, but it makes no sense…