Is there an absence of centrifugal forces in rotating frame of a pulley or in belt friction derivation?

Considering a pulley or belt I understand the derivation of the difference in tension(capstan equation) due the resultant torque needed for the pulley to rotate. 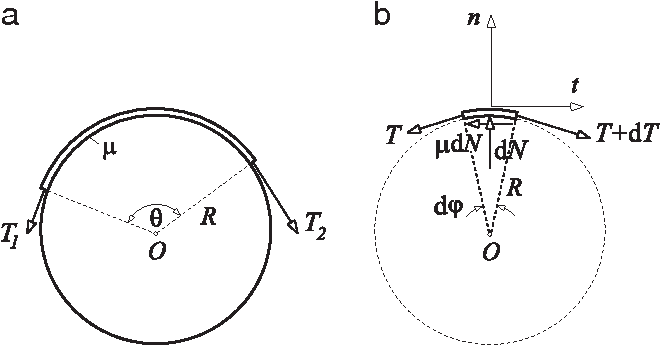 My question is for the tiny section of rope, in the rotating frame it is indeed in static equilibrium and hence we can derive the capstan equation. But, in this rotating frame why are there no centrifugal forces?Is the normal reaction force $dN$ the fictitious force?

It seems to make sense that in the inertial frame, the vertical components of $T$ and $T+dT$ would not be cancelled out as we need some centripetal force for the tiny rope section move in a circle while in the rotating(non-inertial frame) the normal reaction force gives the pseudo-force to keep forces working in the rotating frame.

The capstan equation is derived on the assumption that the system is in static equilibrium - ie it is not rotating. In this case there is no centrifugal force.

It is necessary for there to be a normal force in order for there to be a friction force which prevents the rope from slipping against the bollard or pulley which it is wrapped around. And if there is tension in the rope, and the angle $\theta$ is non-zero, then there must be a normal force in order to balance forces on the section of rope in contact with the bollard or pulley.

Contact forces are always real, never fictitious. They are exerted by real objects, and have a physical origin.

If the rope is actually rotating, as when it is wrapped around a pulley, then there is a fictitious centrifugal force acting on it. This reduces the normal reaction between the rope and the pulley and thereby also reduces the friction force between the rope and pulley. However, the rope is usually assumed to have negligible mass and the angular velocity of the pulley is relatively low, so the centrifugal force is insignificant.

If there is a constant torque on the pulley this causes angular acceleration of the pulley and rope. Each segment of the rope accelerates tangentially - ie its speed increases while the torque is maintained. While the rope is moving in a circle each segment is also accelerating centripetally.

When the pulley is moving each segment of rope now has centripetal acceleration so there is a net force inwards. The radial component of tension has not changed because the torque acting on the pulley has not changed. What has changed is that the normal contact force has reduced. This also reduces the static friction force which is accelerating the pulley.

The Role of Friction

Friction is required to transmit some of the torque from the rope to the pulley in order to make it accelerate. As with friction on the ground, this requires a normal force between the rope and pulley, otherwise the friction force is zero. There also needs to be a tangential force ($T_2-T_1 \gt 0$).

Suppose we push a small box which is resting on top of a large box which is resting on a frictionless floor. (In our case the rope is the small box, the pulley is the large box and the axle of the pulley is the frictionless floor.) Friction between the two boxes transmits some of the force which we apply from the small box to the large box to accelerate it at the same rate, because friction opposes relative motion.

It is the same with the rope and pulley. Friction from the rope causes the pulley to rotate. Without it the rope would slide around the pulley.

In the same way with the rope if we want to keep providing friction to accelerate the pulley then we have to either increase the sum of the 2 tension forces $T_1, T_2$ while keeping the difference the same (this increases the normal contact force - like adding weight to the small box) or we reduce the difference between the tension forces while keeping the sum the same (this reduces the torque - like reducing the force $F$ we apply to the small box).

Not the answer you're looking for? Browse other questions tagged forces classical-mechanics rotational-dynamics friction centrifugal-force or ask your own question.