Does the space collapse to a singularity, for a photon?

Using some elementary concepts, I've arrived at the apparent conclusion that all the space seen from a particle moving at the speed of light always collapses to a singularity at distance 0 from the particle itself. Looking for contrary proofs (or errors).

All the space$^*$ collapses to a singularity point overlying the reference frame moving at speed of light.

$^*$seen by the very reference frame moving at $c$ 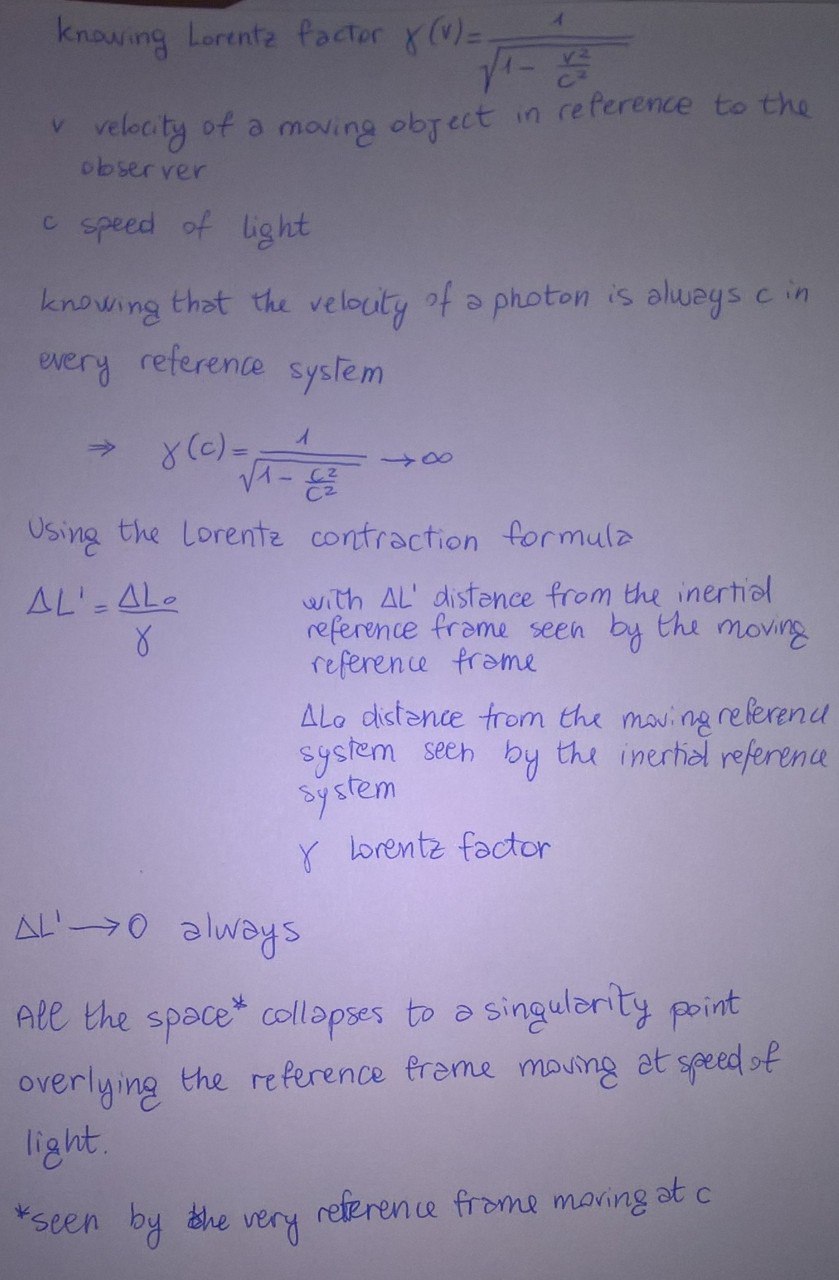 The computation is valid for an inertial reference system put in any point in space, for that I used the generalization "all space".

Your calculation is OK, but your conclusion is too short-sighted:

Assume that there was a reference frame of a photon. Than the photon could take measures of its observations and by these measures, it could draw the picture of the universe.

As a result, your calculation confirms (and proves) simply the fact that a photon has no reference frame.

It is usually a misunderstanding when questions are asked about the inertial frame of a photon. Photons do not have a rest frame. No particle without a rest mass has a rest frame. When you look at the math, you will end up dividing by zero, and it will lead to infinities.

To see this, you need to look at the thing very close to the speed of photons. It is very good to look at the frame of a neutrino. The neutrino is as close you can get to the speed of light and as little mass as you can get. When you try to look at a macro object traveling at that speed (of a neutrino) you will figure out from the math that an observer at rest will see the object contract (its length/spatial extension) to close to zero (at a certain axle parallel to the travel direction). You are correct that length contraction will affect this object when viewed from an observer at rest.

Now when an observer at rest would look at the object travel from the Sun to Earth, the observer would see 8 minutes elapse on its own clock. That is why we say that it takes 8 minutes for a neutrino to reach Earth. That is how much time elapses on the clocks on Earth. But on the neutrino's frame, the clock elapses almost no time.

Now you cannot tell what it would look like from a photon's frame, since it has no rest frame. But you could tell that it should be 8 minutes for the photon to reach Earth. But for the photon, no time passes, it is not moving in the time dimension. For the photon, the spacetime distance from the emission at the Sun to the absorption on Earth is 0. We call this a lightlike worldline. That is why for the photon we could say that it does not experience time as we do (who have rest mass).

Since you are looking for contrary proofs or errors there are a couple of clear errors with the derivation.

Not the answer you're looking for? Browse other questions tagged special-relativity photons speed-of-light or ask your own question.

60
Would time freeze if you could travel at the speed of light?
71
What do spacelike, timelike and lightlike spacetime interval really mean?

2
Length Contraction And Simultaneity
3
Does space between objects contract?
2
Derivation of Lorentz Contraction WITHOUT light roundtrip
0
How is relativistic wavelength shift for a moving detector - stationary source explained?
1
A question about length contraction
0
How does the period of an oscillating mass-spring system comply with the relativistic time dilation as viewed by a moving observer?
4
Do time dilation and length contraction cancel out?