How do I know which type of atomic transition this is?

These all have different selection rules and parity considerations, sure, but are there any other ways to tell?

For example I am looking at the ground state of $^{87}\rm{Rb}$ in high-magnetic field: 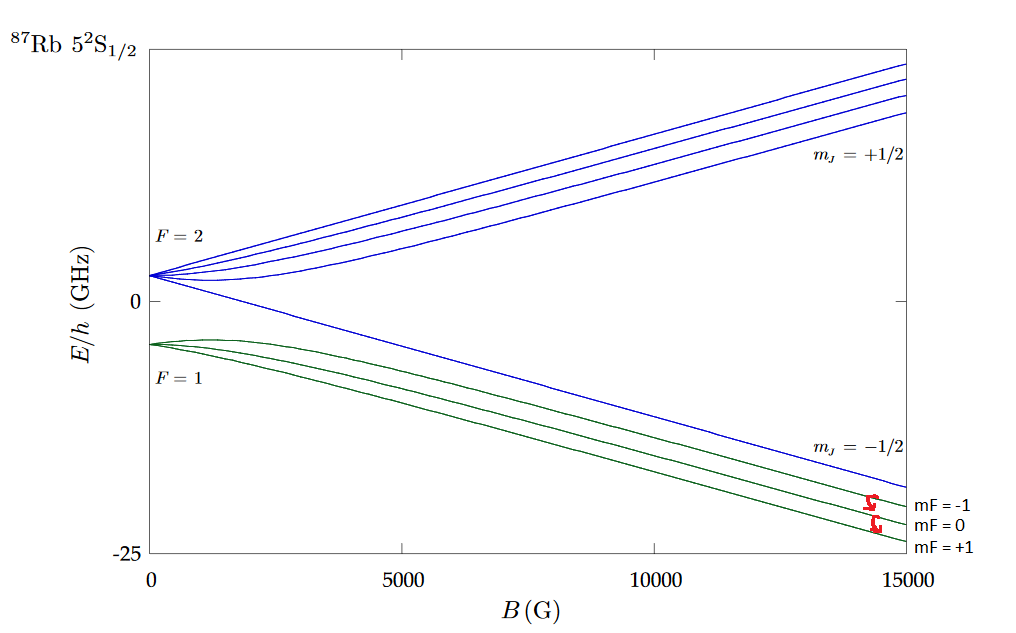 and I know that, by shining a Radio frequency of the correct frequency, I am exciting the transitions indicated by the red arrows.

How do I know which type of transition this?

It preserves parity, so I guess it cannot be electric dipole transitions... anything else?

It is not an electric dipole transition because the orbital state is still S-orbital (you stay in the ground state manifold), and electric dipole transitions should change parity (e.g. S->P. Like the D1 and D2 optical transitions in alkali metals). Also, in the high field region as you have indicated, the electron spin and nuclear spin decouple (as it is already obvious in the Breit-Rabi diagram), so you are just flipping the nuclear spin. Spins only couple to magnetic field, unless they indirectly couple to electric field via spin-orbit coupling.

You may ask, what about magnetic quadrupole and higher order terms? Well, the nuclear spin possesses a dipole moment and no higher order moment, so it only interacts with the magnetic field via the dipole interaction * (see comments below).

I agree mostly with what @jgerber already said. I will add a few remarks.

There is also a nice book consisting of AMO problems called "Atomic Physics: An Exploration Through Problems and Solutions" by Budker et al. There are several exercises on figuring out types of atomic transitions, and how "forbidden" transitions (see alkaline-earth elements like strontium for example) work.

Given no other information I don't knows if there's much more you can say about it. You can look at this selection rules table on Wikipedia and see which types of excitation can drive this transition. As you point out parity is conserved so that rules out odd multipole electric transitions and even multipole magnetic transitions.

The other piece of information you have given is that $\Delta m_J = -1$. This basically doesn't rule out anything. If instead it had been $\Delta m_j = \pm 2$ then that would have ruled out magnetic dipole transitions.

However, it is of course worth pointing out that which transition you are driving depends on the multipolar decomposition of the electric/magnetic field you are driving with. For example, if the field is uniform across the entire atom (which is of size ~$a_0$) then the field can basically be expressed entirely as a dipole field. This means the excitation photons have the mode function of a dipole field. In this case ONLY dipole transitions are driven. If the field has some gradient across the atoms then it now includes quadrapole components which drive quadrapole transitions. Once you determine whether the field configuration includes dipole and quadrapole elements you must now calculate the transition matrix elements for the different types of transitions you are considering. This is basically to say how well does my ground state, when I act the dipole, or quadrapole operators on it, overlap with the excited state. It is a geometric statement about the ground and excited states. It turns out (perhaps I can give a more thorough explanation why at a different time) that these matrix elements are increasingly suppressed by certain large factors as you move to higher multipole orders.

So to answer your question, it is most likely that you are driving a magnetic dipole transition here. This is because

3) You are most likely driving the transition with a field which is predominantly dipolar from the perspective of the atom. I don't know how you would get an RF field which varies dramatically over a length scale of $a_0$.

Not the answer you're looking for? Browse other questions tagged quantum-mechanics atomic-physics or ask your own question.

2
Why can I see the 5D0 to 7F3 transition in the trivalent Eu?
5
Understanding the Selection Rules of a Spin-Forbidden, Magnetic Dipole Transition in Molecular Oxygen
1
Can you give an example of magnetic dipole transitions?
5
Meaning of dipole approximation for selection rules
3
Transitions in QM
4
X-ray Lasers and Forbidden Transitions
0
What causes the transition $J=0\to J^\prime=0$ absolutely forbidden?
2
Components of Electric Quadrupole Oscillator Strength
1
Why do we only see transitions corresponding to circularly polarized light in dichroic spectroscopy?
2
Does a 9,192,631,770 Hz hyperfine transition create 9,192,631,770 photons per second, or fewer?