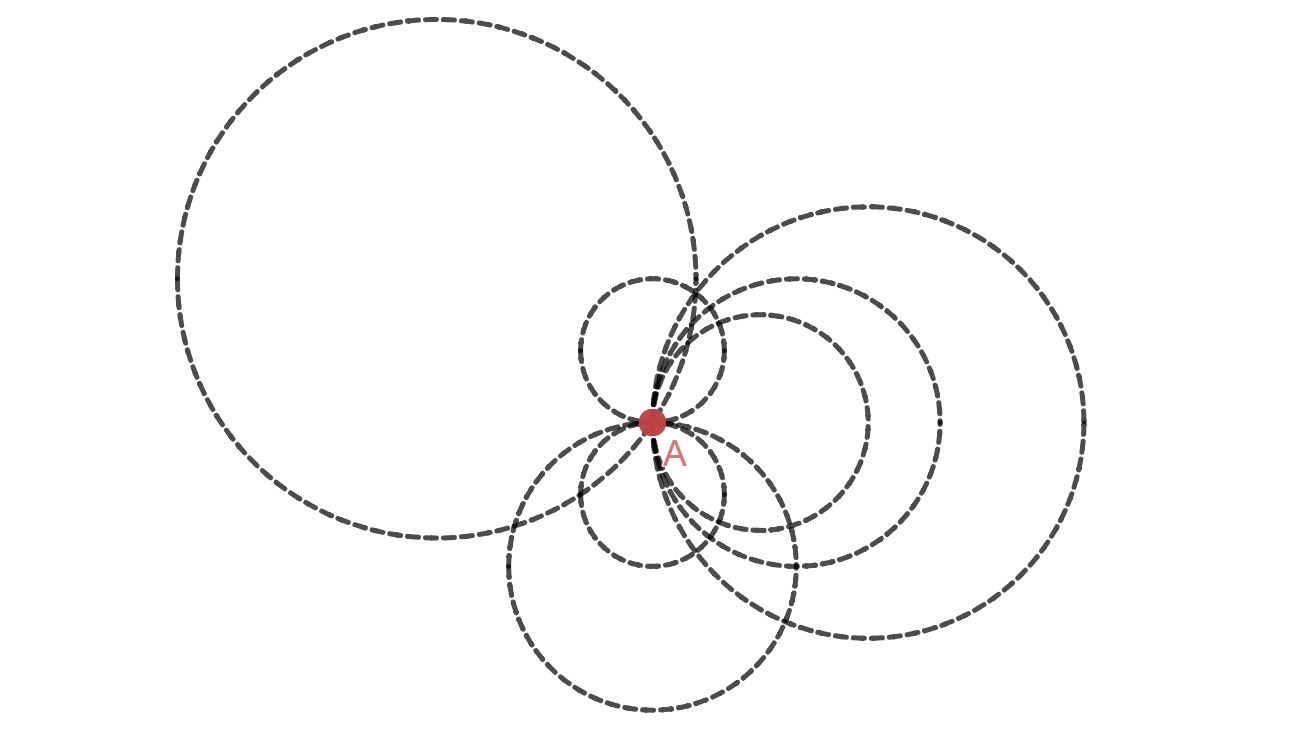 What will the nature of these fields be? Will they be circular? And if so then about what point in space will they be oriented since all points are practically identical?

If we calculate the magnitude of Electric field at a point (say A) that is present on the circumference of several circles (in figure) then,

Now there are infinitely many closed loops $\Gamma$ (even circular ones with same radii) that include a particular point and many of them may enclose same or different areas. Since the rate of change of magnetic field is constant, the left hand side of the inequality is only dependent on area enclosed by the loop.

Won't this give conflicting results for the Electric field at a point calculated using differently oriented loops?

Let us suppose there is a uniform magnetic field present in all space, pointed into the screen.

But - and it is particularly relevant to this question - even if we had a perfectly uniform magnetic field, it would not be able to change uniformly everywhere, which means that we would not be able to guarantee the same induced emf for any two identical loops randomly placed in that field.

Let's take a loop in a uniform magnetic field. It has a certain number and density of magnetic field lines inside its perimeter. What should happen with these lines, if the field is decreased?

According to the time tested, if not particularly rigorous, logic, the density of magnetic lines has to decrease and, for that to happen, they have to cut through (or cross) the loop, i.e., they would not just become weaker or selectively disappear.

Since the magnetic field is supposed to remain uniform, we should assume that the magnetic lines will cross the loop symmetrically, moving out uniformly in all directions. But this symmetry of expansion around the center of this particular loop makes the expansion for the loop next to it asymmetric.

So, the assumption that the magnetic field could change in a uniform way everywhere leads to a contradiction.

What will the nature of these fields be? Will they be circular? And if so then about what point in space will they be oriented since all points are practically identical?

The diagram below is depicting electric field lines (red arrows) generated by the changing magnetic field (blue crosses) of an infinite wire carrying a changing current.

In this case, electric field has the same direction everywhere in space, but the magnitude of the field is decreasing with the distance from the wire, because it is produced by the changing magnetic field that is decreasing with the distance form the wire, per Biot-Savart law, as $\frac 1 r$. As a result, the line integral of the electric field along a circular path shown on the diagram would yield a non-zero emf.

Won't this give conflicting results for the Electric field at a point calculated using differently oriented loops?

We can see that any number of intersecting circles could be drawn, each having its own emf, despite the fact that the electric field in the intersection points of the circles will be the same. This is because there are many other points in each circle with different fields to produce different emf's for each circle. So, there is no contradiction here.

Not the answer you're looking for? Browse other questions tagged electromagnetism magnetic-fields maxwell-equations electromagnetic-induction or ask your own question.