Feynman's calculation of surface charge density in a dielectric: is the surface polarization charge a true an electric charge?

This question pertains to The Feynman Lectures on Physics, Vol II 10-3

Feynman says the following about the surface polarization charge on a dielectric:

This charge can be calculated as follows. If $A$ is the area of the plate, the number of electrons that appear at the surface is the product of $A$ and $N$, the number per unit volume, and the displacement $\delta$, which we assume here is perpendicular to the surface. The total charge is obtained by multiplying by the electronic charge $q_{e}$. To get the surface density of the polarization charge induced on the surface, we divide by $A$. The magnitude of the surface charge density is

with the angle between $\vec{\delta}$ and $\mathfrak{r}$ equal to zero. So

If we represent the effective charge per dipole by $q_{\text{eff}}$, then if it's really an electric charge, the potential would be

So, I ask: is the surface polarization charge really an electric charge?

This part I understood when I posted my question:

This image depicts one idealized model I concocted to explain the mathematics of calculating the surface charge. 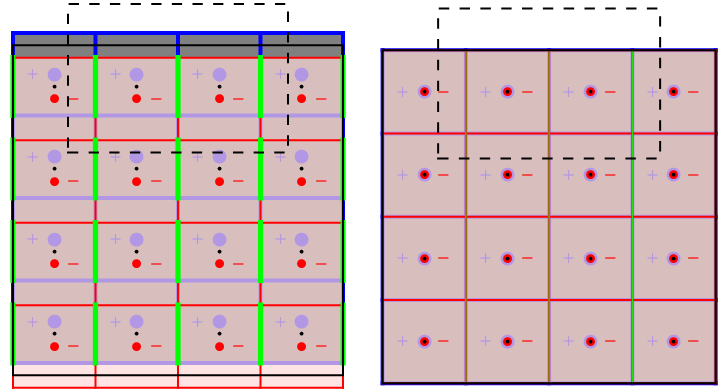 The cells of the dielectric (atoms, molecules, whatever) are imagined as having overlapping positive and negative rectangles of uniform charge distribution of density $\rho$. In the absence of an electric field (right) their center points are aligned. So there is no net charge at any point in the diagram. When a field is applied, the centers are displaced as shown (left). The distance between points which originally overlapped is what Feynman calls $\delta$. The positive and negative charge distributions are treated as rigid squares in the illustration.

Integrating the electric flux over the Gaussian shell, depicted as a dashed line, results in no contribution from points strictly in the interior of the material, and no contribution from the region strictly beyond the surface layer. Since the surface layer of area $\Delta{A}$ is missing an amount of negative charge $\Delta{A}\delta\rho$, the net charge determined will be $+\Delta{A}\delta\rho$.

If the total positive movable charge per cell is $+q$, and the number of cells per volume is $N$, then $\rho=qN$. Thus the amount of exposed positive charge over the entire surface area $A$ is $ANq\delta$. Setting $q=q_e$, and dividing by the volume gives $\sigma_\text{pol}=Nq_e\delta$, as advertised by Feynman.

The gray material is dielectric, and the black is conductive. The two parts are connected by a charged capacitor. This will induce a "surface charge" on the outer surfaces. Nowhere will there be a Coulombic potential due to this assembly.

That was the essence of my original question. The surface charge doesn't act like an isolated electric charge.

But that was an observation made because something else Feynman said caused me a problem. Here's the real reason I balked at Feynman's discussion:

This charge can be calculated as follows. If $A$ is the area of the plate, the number of electrons that appear at the surface is the product of $A$ and $N$, the number per unit volume, and the displacement $\delta$, which we assume here is perpendicular to the surface.

Referring back to the first graphic. Rather than treating the charges as being distributed over a volume, we instead consider them to be point charges arranged in the lattice, as shown. In this case any displacement will move all the positive charge points above the line connecting the black dots. In that case, there would be a Gaussian shell containing a net charge of $q_{e}N\Delta{A},$ which is huge. I'm sure that's not what Feynman had intended, but he really didn't explain very clearly what he did mean.

The problem may be that I'm pushing the idealized models past there limitations.

Yes, it exists as a what is known as a "bound charge". This answer might look lengthy, but do read through it carefully. I have attempted to explain it as simply as possible.

Consider a closed cubical surface within an unpolarized material. Since the material is neutral and the surface encloses no net charge, the free charge density is zero: $$Q_{f} = 0$$ Now, imagine that the material becomes polarized parallel to the cube, such that each atom can be represented as a dipole of length $d$ with center at the original center of the atom. Consider the face of the cube where the dipoles are pointing straight at the surface.

Now, consider a small area element $da$ at the surface. Let there be $n$ dipoles per unit volume, each with a dipole moment $p$ and charge $q$. The small volume element containing the affected dipoles is $$2 \left(\frac{d}{2}\right) \text{d}a$$ as dipoles both above and below by a distance $d/2$ have to be considered as mentioned above. The number of dipoles is $$(nd)\text{d}a$$

The charge is therefore $$\text{d}Q_{b} = (-qnd)\text{d}a = -np\text{d}a = -P \text{d}a$$ where $P$ is the polarization per unit volume. We have used the relations $p = qd$ and $P = np$. This is because positive charge has left the volume and negative charge has entered, so there is a net negative charge. Now, let us generalize it by writing it in vector form.

If the dipoles are inclined at an angle $\theta$ to the surface, then we just have to take the dot product, so our expression becomes: $$\text{d}Q_{b} = -\vec P\cdot \text{d}\vec a$$ If the surface is parallel to the dipoles, $\theta = 0$, so there will be no effect, as expected.

Is the surface polarization charge really an electric charge?

The short answer is yes: it's really an electric charge. In fact, in some respects, it's more accurate to view the polarization charge as the fundamental quantity, and to view the polarization density $\vec{P}$ as a calculational fiction. An excellent summary of this perspective can be found in Zangwill's Modern Electrodynamics, a brief summary of which I provide here.

The problem is that the conditions above do not uniquely specify $\vec{P}$. Helmholtz's theorem says that if you specify the divergence and the curl of a vector field on some volume of space, along with its values on the boundaries, then this uniquely determines the vector field. However, we have not specified the curl of $\vec{P}$ above, nor its components lying in $S$; thus, $\vec{P}$ is not uniquely specified. Specifically, I could add any divergence-free vector field to $\vec{P}$ and it would correspond to the same bound charge distribution.

While this may seem to be a fine distinction, it's worth noting that the $\vec{P}$ that we use to describe the matter macroscopically is not always equal to the "dipole moment per microscopic unit cell" in the matter once it reaches equilibrium. Zangwill discusses this in the context of a sodium bromide crystal, where he finds that

The macroscopic $\vec{P}(\vec{r})$ calculated from the Lorentz formula [dipole moment per unit cell in the crystal] accounts for less than half of the true polarization... The majority of $\vec{P}(\vec{r})$ comes from polarization currents which flow between averaging cells. These currents play no role in the Lorentz approximation. Similar calculations performed for covalent dielectrics like silicon produce highly complex plots for $\rho(\vec{r})$ and $\vec{P}(\vec{r})$ which completely rule out an interpretation in terms of cell dipole moments. The Lorentz picture is qualitatively incorrect for these dielectrics.

To summarize: Lorentz's physical model of a dielectric composed of polarized atoms or molecules is realistic only when those entities retain their individual integrity as quantum mechanical objects. Gases, simple liquids, and van der Waals-bonded molecular solids satisfy this criterion, but the vast majority of dielectrics do not.

In other words: the charge distribution in a dielectric is really what matters, and it is an honest-to-goodness charge density. The polarization vector $\vec{P}$ is a useful mathematical construct, but it is not uniquely defined, and half the time it doesn't accurately represent the charge distribution inside a dielectric anyhow. Best to take it with a grain of salt.

Zangwill refers the interested reader to the following reference for more information: