If you fired a laser at the perfect angle at a mirror (for either mirror setup), and then quickly moved a mirror to replace the laser, will the light oscillate between the mirrors, as shown in the picture?

The mirrors may absorb a small amount of light each time light "strikes" it, so will the light continue to oscillate between the mirrors until all of the energy is absorbed?

And in the second setup, if light does indeed reflect back and forth, doesn't that mean that the speed of the photons is zero at the point of impact (when it reverses it's velocity)? 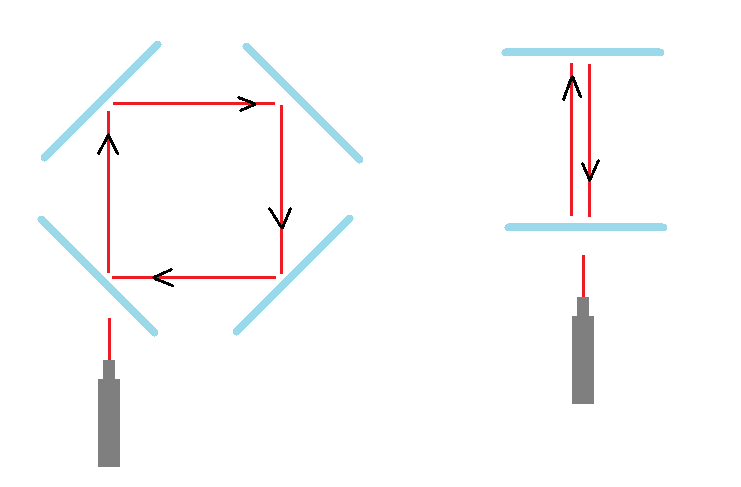 I think it may be a bit misleading to always think of light as collection of photons. See the comments by John Rennie in this post, for example.

Regarding your mirror construction, yes the light can bound around when you build a cavity around, but the optical path length should be an integer multiple of the wavelength of light (the light is on resonance with the cavity). When off-resonance the cavity cannot support the coherence oscillation of light. Also, you drew flat mirrors, but in practice the mirrors would need some curvatures to compensate for the divergence of the propagating light. The first drawing will look similar to a bow-tie cavity and the second one to a Fabry-Perot cavity.

Now let's look at the second drawing, for example. The light forms a standing wave, and at the surface of the mirror, the amplitude of the light is zero, so there is zero probability of detecting a photon right at the surface.

First, you cannot move a mirror, that has a rest mass faster then light to replace the source of light. but let's disregard that, and say that there is a photon bouncing between two perfect mirrors. This is called a photon clock.

Now photons are scattered elastically, that is called Rayleigh scattering froma mirror, that is the only way to keep the photons' energy and phases and build a mirror image. Now in the case of elastic scattering, the energy of the photon is kept, so in the case of a perfect mirror, this can go on forever. Of course there are no perfect mirrors, so after a while the photon will be absorbed or inelastically scattered and loses energy or gives all its energy to the absorbing atom's electron.

When the photon is scattered elastically off an atom of a mirror, it's wavefunction, that describes its probability desctribution for all of space, will change by changing the speed vector's direction of the photon. Everything else, all the other characteristics of the photon are kept, this is the only way to build a mirror image.

So your question, whether the photon is slowing down or not, it is not. Photons always travel at speed c in vacuum, when measured locally. When the scattering happens, the photon's speed vector's direction is changed, but the magnitude is always c. That means, that the speed of the photon is always c before, during, and after the scattering process, what changes is just the direction of the speed vector. (This is true for absorption re-emission too). If there would be an absorption, re-emission, the photon would seize to exist, until that moment, its speed is c, and after the emission, its speed is c instantaneously.

After the comments, it is important to note that whenever the photon bounces off inside the mirror, it exerts pressure (momentum) on the wall of the mirror.

Not the answer you're looking for? Browse other questions tagged visible-light photons reflection laser oscillators or ask your own question.

-4
Do photons oscillate or not?
0
If photons don't oscillate, how do they oscillate?
0
Standing waves and Photons

0
Reflection between two mirrors?
0
Can relativistic momentum (photons) be used as propulsion for 'free' after the initial generation?
5
Is a Perfect/Lossless Mirror possible?
13
Effect of gravity upon light and bagels
1
Photon doesn't answer it… How will wave nature explain it?
3
Is it possible to save the light?
1
What is the difference between a white object and a mirror in terms of heat absorption?
1
Will laser scanning system miss photons when the mirror scans too fast?