What would be the outcome of conducting the following modified double slit experiment?

Take the normal double slit experiment with a detector on the double-slitted wall, and behind it, add a second wall with three slits in it.

Build the back wall such that a particle passing through one of the front wall slits is likely to continue through either of two of the three back wall slits.

The main factor of interest is use of the front wall (with detector) to eliminate one slit in the back wall.

Can you predict and describe the kind of pattern that will appear on the screen, and can you describe/explain the process a particle goes through during the experiment?

I don't care for a super precise answer.

Note: I don't know the answer. This is a genuine question I thought of today, not a school assignment (AFAIK, but I have not been taught QM, so what do I know.)

Since there is a detector at the front wall, you don't get interference between $A$ and $B$. Instead, the patterns simply add. The pattern at the screen from either A and B will be just a double slit, so the pattern here would just be two double slit patterns superposed on top of each other.

As usual, the result of this experiment should not be stated in terms of trajectories of particles, because the particles simply don't have trajectories at all in standard QM.

At least, for some particular choices of slit size, separation, and wavelength. Let me explain a little.

There may be many ways of doing this calculation, but by far the most fun is with Feynman path integrals. Actually, the method I used is described very well in his book QED. Essentially, interference is caused by the different lengths of the paths, since a photon traveling a different distance is in a different phase of it's cycle. So, by picking a set of paths for each location on the final screen, I just calculated the phase associated with each path, added them together, and took the absolute value to get the amplitude. Technically, I did:

The arrangement of the slits is as follows: 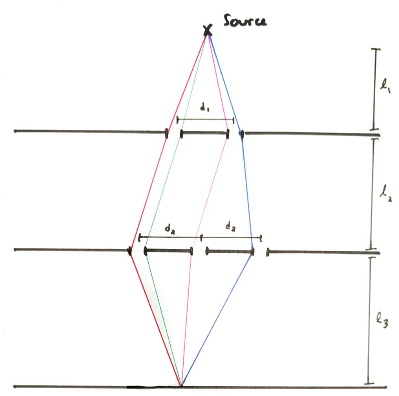 I have also drawn 4 representative paths, as an illustration. Each point on the screen used 24 paths, as each slit was simply broken down into 2 points, it's edges.

For the actual dimensions, I used arbitrary units, but eventually made choices which roughly correspond to the diffraction of red light. Choosing the wavelength to be 7, the half-slit sizes were each 3500, the center-to-center distances of the slits were all 10000, and the distances between the screens were all 10000000. For the three plots above, I varied the wavelength from 7 (on the left) to 12 to 20 (on the right).

All this is in a spreadsheet, where you can change the various distances to some degree (although you can't improve the resolution, that would require quite a bit more work). You can check out the spreadsheet here. The apparent asymmetry is certainly due to the lack of resolution.

Again, I'm not sure this gives you the answer you want, because everyone who says "it depends on the distances involved" are all correct. But, at least this gives you a flavor of what such a pattern might look like.

As an editorial note: this was super fun, but I'm sure not it was the easiest way to do this calculation!

It would likely look very mixed on the screen. The particles passing on the left 1st wall get diffracted and become multiple sources for the 2nd wall. The particles where the detector is on the right side lose all diffraction properties and it appears as a point source for the 2nd wall. So finally the 3 slits see multiple sources from the left slit and a point source from the right slit, these sources would be diffracted by the 3 slits which would leave a complicated mixed pattern on the screen.

Like WILLO said "the answer depends on the size of the slits, the distances between them and the wavelength of the light" Answering your question also depends on the location of the 1st wall detector. If it blocks photons at (A) then you have a single source from (B) hitting a three slit wall and creating a three slit pattern on the final screen. If the detector blocks photons at (B) then (A) becomes a single source and creates the same three slit pattern at the final screen. If the detector blocks both A and B then you have no source, no light and no pattern.

Not the answer you're looking for? Browse other questions tagged quantum-mechanics double-slit-experiment interference wave-particle-duality or ask your own question.