All the news articles say it'll orbit the sun at 430,000 mph. How do they get that? It seems too low. Isn't orbital velocity proportional to $1/\sqrt{r}$? Parker will be 4 million miles above the "surface" of the sun, thus 5 million miles from its center. Earth is about 94 million miles away from the sun's center. Therefore this thing should orbit $(94/5)^2$ times as fast as we do, or about 26 million mph, or so it seems to me.

For a keplerian elliptical orbit with constant energy, the relation you're looking for is $$ \frac12 mv^2 - \frac{GMm}{r} = E = \mathrm{const}. $$ Orbital velocity is only proportional to $1/\sqrt{r}$ when $E=0$, i.e., for a parabolic orbit. For circular and quasi-circular orbits, the total orbital energy is roughly half the potential energy (in magnitude), so if you leave it out then you'll get some very wrong numbers.

Here $v_1$ is roughly equal to the Earth's orbital speed (but at a much lower aphelion) whereas $v_2$ (which corresponds to a completely fictional orbit that might not make sense at all) is a good deal slower than that.

Furthermore, it's important to dig a bit into this:

Earth is about 94 million miles away from the sun's center. Therefore this thing should orbit $(94/5)^2$ times as fast as we do.

That presupposes that the probe goes directly to the Sun and then returns to the Earth orbital radius, which is not how the orbit is planned out. Instead, the orbit includes a Venus flyby on the first orbit, which will drastically lower the aphelion and drain the orbital energy; the second aphelion will be at something like 0.9 AU and it only goes down from there, via a series of Venus flybys through the mission which will repeatedly take orbital energy away and lower both the perihelion and the aphelion: 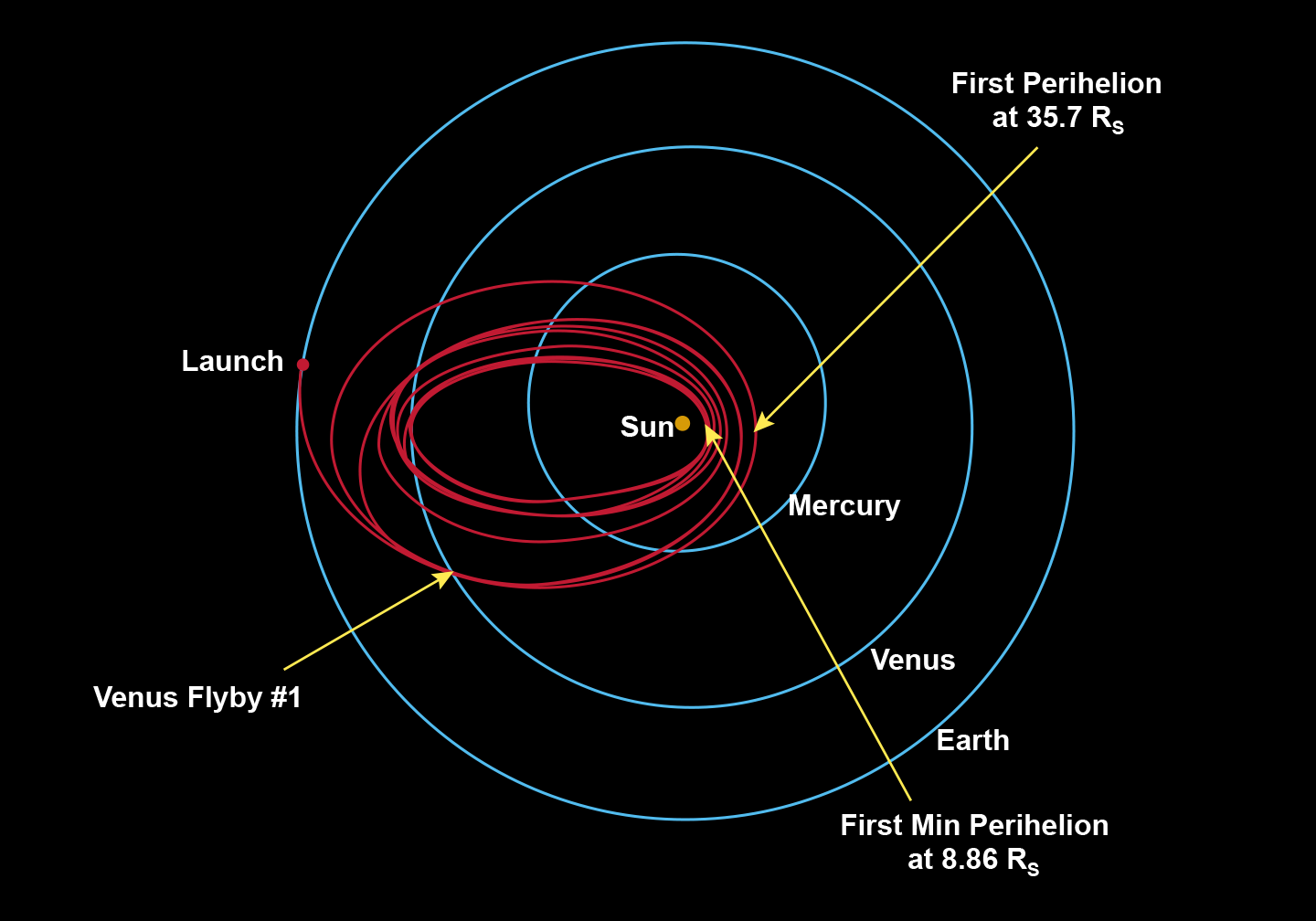 As Emilio Pisanty mentioned in his answer, that's the speed of an object on a parabolic trajectory. That requires a fairly high velocity. The orbital speed drops to $1/\sqrt{2r}$ for an object in a circular orbit. The general rule, for all kinds of orbits in the two body problem is given by the vis viva equation, $$v^2 = G(M_1+M_2)\left(\frac2r-\frac1a\right)$$ where $v$ is the relative velocity between the two gravitating objects, $M_1$ and $M_2$ are their masses, $r$ is the distance between the objects, and $a$ is the semi-major axis length of the conic section (circles, ellipses, parabolae, and hyperbolae). Note that the semi-major axis length is infinite for a parabola and negative for a hyperbola. In the case of a tiny mass such as the Parker Space Probe and a large mass such as the Sun, this reduces to $$v^2 = \mu_\odot\left(\frac2r-\frac1a\right)$$ where $\mu_\odot \equiv GM_\odot$ is the Sun's standard gravitational parameter.

The vis viva equation appears so often in orbital mechanics that it's worthwhile remembering it.

But why bother? The linked online calculator is rather smart. It can do that tedious stuff. Just tell it what you want.

23
Parker Solar Probe passing extremely close to the Sun; what relativistic effects will it experience and how large will they be?
2
What is the fastest moving macroscopic object people have made?

5
Are orbits interior to Jupiter's orbit less stable than orbits exterior to Jupiter's orbit?
1
How do they point a camera on a space probe?
3
Why does the Cassini probe experience jerky acceleration in deep space?
4
Why isn't the time between apogee and perigee constant?
3
Simulation of relativistic probe passing through an external solar system
2
Juno probe's speed is in relation to what frame of reference?
3
Since the Earth orbits the Galaxy, why doesn't it “fly away” from astronauts?
23
Parker Solar Probe passing extremely close to the Sun; what relativistic effects will it experience and how large will they be?
1
Would it be possible to invert a tokamak to make a solar probe?