In refraction how does light interact with electrons if it is not absorbed? [duplicate]

What I (think I) understand: When light is refracted in a medium (say glass), the light interacts with the electrons in the medium and the electrons create new waves. Summing the waves with the original wave gives a group velocity slower than c because of phase lags.

What I'm confused about: How is light interacting with these electrons? It's not being absorbed. Here it is described as being "virtually absorbed". I understand that you can view a photon as taking every possible path and sum them, but they're if they don't have the energy to excite an electron, then why would summing a bunch of paths where it can't excite an electron result in "virtual absorption"? What does "virtually absorbed" mean? Sixty Symbols describes it: "In an indirect way they're able to make the electrons wiggle." What is this "indirect way"? Also is dispersion a continuous or discrete phenomenon and why?

When a photon interacts with an atom three things can happen:

In your case, when light gets refracted inside glass, it is elastic scattering, it is called Rayleigh scattering, specular reflection. This is the only way that a mirror image is kept, and the photon keeps their energies and phases. And all the photons get coherently scattered.

The ratio of inelastic scattering, that makes as you said wiggle, is smaller in glass, but it still works. Now in the case of inelastic scattering, the photons give part of their energy to the atoms and molecules. We have to clarify, that what you are talking about, the wiggle, is called vibration of the molecules. That is what we call temperature of the glass. When photons give part of their energies to the atoms and molecules of the glass, the vibrational energy of the molecules rises, temperature rises.

The ratio of real absorption in glass is smaller too. Some of the photons get really absorbed by the atoms' electrons, and then those electrons get relaxed, and re-emit photons.

The reason you get a speed less then c, is because the way you calculate speed for the wavefront. You are using a straight path as distance, and divide it by the time the wavefront needs to pass through the glass. The individual photons always travel with speed c (when measured locally), because they always travel between the atoms in vacuum. But as the photons get scattered by the atoms of the glass, they change path, because the waves interfere, and the only constructive interference will be the path the photon will go from atom to atom. But that path will not be the same path through the glass as the straight path you calculate speed with. 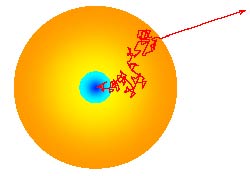 Here is a picture of a photon making its way out if the Sun. It might take 100000 years for a photon to get through the dense gas. Is the speed of the EM wave that slow? No. The photon travels with speed c (when measured locally) between the atoms. But since it interacts with so many atoms, and as it travels as a wave, parts of the wave interfere with each other, and that changes the path of the photon.

It is a little bit similar in glass, and that is why the wavefront slows down. individual photons still travel at speed c between the atoms.

Not the answer you're looking for? Browse other questions tagged quantum-mechanics visible-light refraction dispersion or ask your own question.

11
Does light actually travel through glass?
42
How does light re-accelerate after slowing down?

6
What happens to the absorbed light energy?
12
Why do some materials reflect (metals) and other materials reflect and refract (glass) from the quantum perspective?
3
Light in a box with positron walls instead of electrons
2
How does light filtration work?
0
Basic question about light
1
Light Refraction and Conservation of Momentum
7
Is reflection and refraction the same thing - bouncing of light?
11
Does light actually travel through glass?
0
Can core electrons emit (visible) light?