My question is pretty much as the subject suggests. Recently Fabrizio Carbonne and a team from EPFL have managed to image the wave particle duality of light. I thought however that this was a technical impossibility given the measurement effect and what Bell’s inequalities told us about the reality of superposition, the absence of local hidden variables (and that Schrodingers cat is really both alive and dead). My understanding was that the wave exists as a probability function only and that to observe light as a wave is really to take many measurements of many different photons each obeying this probability function. Is that essentially what the team has imaged and in which case why is this success so special?

Look at this single photon at a time experiment that does demonstrate the duality: the accumulated crossection of single photons shows a wave nature.

The hit of the individual photon shows the footprint of a particle, while the accumulation shows the wave nature.

The EPFL experiment, may be special, but imo depends on the "eye of the beholder effect", (actually the "interpretation of the observer"). 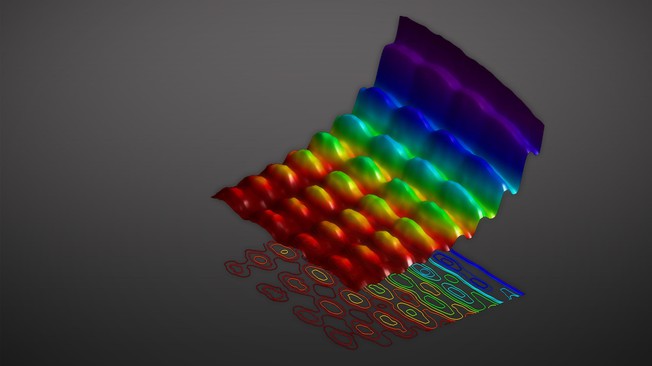 As the electrons pass close to the standing wave of light, they “hit” the light’s particles, the photons. As mentioned above, this affects their speed, making them move faster or slower. This change in speed appears as an exchange of energy “packets” (quanta) between electrons and photons. The very occurrence of these energy packets shows that the light on the nanowire behaves as a particle.

So, in my view, to interpret the probability/crossection seen at the picture, a cumulative ensemble of photons, the quantum mechanical distinction of particles and probability waves has to be mathematically invoked, but it is not a simple demonstration of the particle/wave duality. The single photon double slit is.

What's special is that it's a method where the photons are in a standing wave (kind of like standing still) and the slit/matter is moving, i.e. the electrons. Many electrons resultant positions are measured at a variety of interaction points in the photon standing wave and so an average is obtained which is the most probable position of the photon wave. So there are no violations of QM here, it is just a really neat new method to observe the interaction of light with matter. ( In the double slit experiment the light is moving and the matter/slit is standing still.)

Not the answer you're looking for? Browse other questions tagged quantum-mechanics wave-particle-duality wavefunction-collapse photonics or ask your own question.