Essentially, I'm trying to determine the amount of elastic potential energy stored in a thin, elastic sheet that has gone under some type of stretching (ex. A flag of stretchy fabric waving in the wind). To keep the post as relevant as possible, in this example the sheet can be rectangular and is just being stretched length-wise and width-wise into a larger rectangle.

Since I'm simplifying the sheet's behaviour to follow Hooke's Law, I started off by realizing that Hooke's Law applies to linear deformations, and in this case I essentially have two linear stretches of the whole sheet, one in the x direction and another in the y. If I calculate both stretches, I figure that I can compute the elastic potential energy contributed by both and just add them together to get total energy.

My main questions would be:

1) Is there any missteps in my reasoning, especially in how I treated the overall stretch as 2 independent stretches (i.e. x and y)?

2) Is there any relationship between the elastic coefficient of the sheet when stretched in the x-direction vs. the y-direction? Or would they be independent and need to be determined by experiment?

Indeed, you can do it for calculating the potential energy by linearly adding together both contributions in x and y.

So, suppose you have a system that can be represented like this, directions to be stretched are represented by the axes: 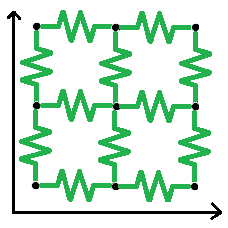 Then the coefficients in the x and y axes are obviously independent of each other. and might have different values, and so are the components of force. 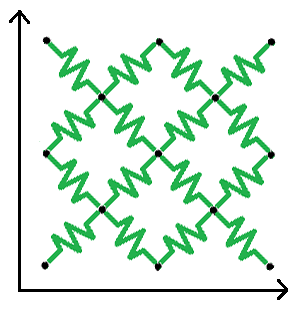 Then it is not so obvious that they are independent.

To simplify, suppose I have one spring with coefficient k, positioned diagonally with respect to axes. $$\vec F=k\Delta r \hat r = k\Delta r(\frac{\Delta x}{\Delta r} \hat x + \frac{\Delta y}{\Delta r} \hat y) = k\Delta x \hat x + k\Delta y \hat y $$ So, the components of force can be separated with having the same effective coefficient k as the original, on both components. And this can be applied to a system of combination of springs, just like above, which can represent a sheet of fabric, that is assuming there is zero or minimal shrinkage or contraction in between when stretched on opposite sides.

The above shows that the components of force can be treated independently, But are coefficients independent? or does it depend on orientation? To make it short, directions of stretch can be considered as completely independent, and depends on the type of material. however, there might be sets of directions which might have the same coefficients. for example, most fabric can be represented by a square lattice and the repeating symmetric thread patterns usually lie on 2 perpendicular directions depending on where the thread is run. Then the directions with similar strengths are usually the directions with mirror angles to the line of reflection which are the 2 perpendicular lines of directions mentioned above. 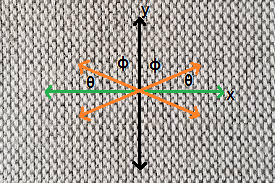 Furthermore, my hypothesis is that the result will likely be a Young's modulus type formula, but instead of $$\frac{F}{A} = E\frac{\Delta l}{l_0}$$ you'll get $$\frac{F}{L} = E\frac{\Delta l}{l_0}$$ Because it is 2D, where $L$ is the length of the side perpendicular to the length to be stretched, $l_0$ is the length of the length to be stretched. :) and $E$ is the elastic constant in specified direction (wrt thread orientation), which $E$ supposedly should now be "constant" and independent on length or width of material since it is now taken already into account in the formula. :) Might apply only to rectangular shapes though, and where direction of force should be parallel to either side of rectangle. So the formula is basically just Hooke's law ($F=kx$) but taken into account the length and width, to make the coefficient $E$ more universal, remaining approximately constant even with respect to any change in length or width of material.

To answer your first question, no, there is no faulty reasoning in breaking the forces down into their x- and y-components. As long as the x- and y-planes of the sheet are the fabric's weave directions, all will work out.

For your second question, if this is a real fabric, and not a theoretical one, then the different weave directions will provide different effective k constants for the different directions of stretch, which can be experimentally determined by calculating how much force is pulling on the fabric, and how much it moves with Hooke's Law relationship. If the fabric is theoretical, then treat the problem however you like to make the example clearest.

Use the image below as an example: 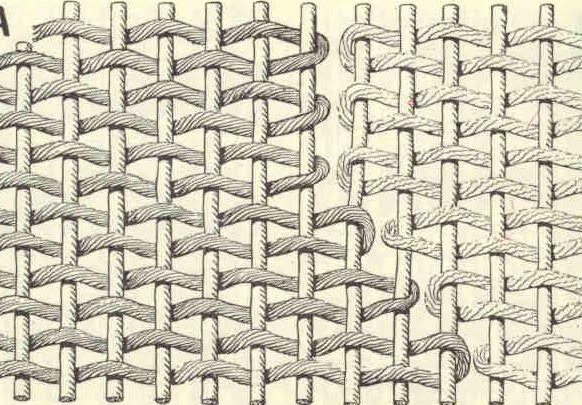 The weave has a different pattern in the x-direction as the y-direction, as most weaves do.

tl;dr the fabric weave will change the k constant of the fabric.

Not the answer you're looking for? Browse other questions tagged energy potential-energy elasticity soft-matter or ask your own question.

0
Violation of conservation of energy and potential energy between objects
0
Is there a difference between, static loading and fast loading of a polymer (non linear elastic material) in terms of elastic potential generated?
2
Deriving the formula for energy stored in a spring without using geometry (determining the area under a curve)?
1
Elastic Potential Energy, Rubber, and Areas
25
Why is the potential energy of a spring the same when it is compressed and stretched?
3
How does temperature affect the elasticity and spring constant of a rubber band
2
Mechanics of a particle problem (potential energy vs. work approach)