Static equilibrium - Ladder against a wall, how far can person ascend

Resolving Horizontally I get $S=\frac14R$ as thats the friction force at the bottom of the ladder equal to the normal force working the other way at the top of the ladder.

A way of simplifying the problem is to combine the two weights using the idea of centre of gravity. 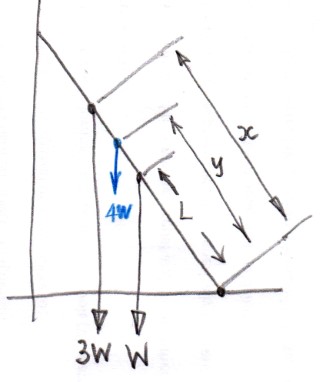 However there is still a problem in that there is static friction at both ends of the ladder.
The simple way of solving such a problem is to assume that when the person gains maximum height the friction forces at both ends of the ladder are at a maximum given by $F = \mu \, N$ where $\mu$ is the coefficient of static friction and $N$ is the normal reaction.
Proving this to be the case is a little more difficult. 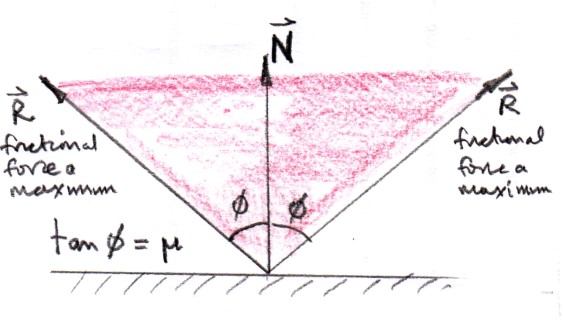 The coefficient of static friction differs at each end of the ladder is different so the range of directions of the resultant forces (friction and normal reaction) at each differ as shown below with the shaded area showing the region where the lines of action the two resultant forces can intersect. 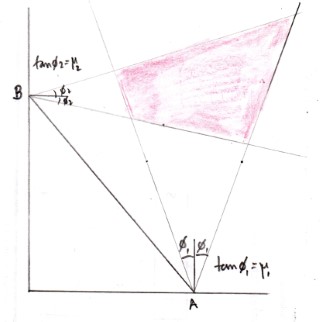 For these three forces to be in equilibrium their lines of action must intersect at a point.
Remembering that you are asked for the maximum height to which the person can climb the diagram below shows that if this condition is to be satisfied the static frictional force at both the ground and the wall must be a maximum. 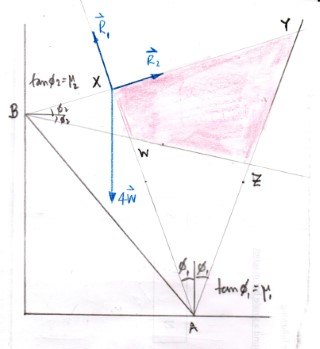 So you need to look at each problem individually and rhere are some mechanics problems which you cannot solve without extra information.
For example if the line of action of the weight $4\vec W$ passed through the vertex $W$ of quadrilateral $WXYZ$ there is a range of values of $\vec R_1$ and $\vec R_2$ for which the ladder and person is in stable equilibrium,

It is a pity that the edX course 2.01 x Elements of Structures no longer exists even in archived form but you can still view a nice video about a Statically Indeterminate Problem which shows that for some mechanics problems one needs extra information to solve the problem.

The equations for static equilibrium are

The non slipping conditions are 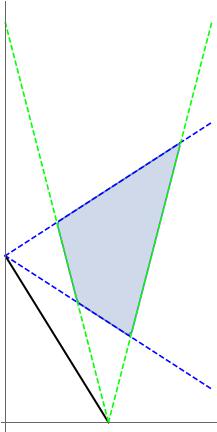 In non slipping condition, the support lines for $F_1$ and $F_2$ will cross inside or at the boundary of the delimited light blue region.

now solving the equilibrium equations for $h_1,h_2,v_1$ we have

We leave the exercise at this point, so that the reader is in charge of solving the final steps.

0
Ladder and friction (wall and floor)

2
Nature of frictional force
1
Centripetal force on a Ferris wheel
0
Which normal force for friction?
0
Two Blocks and a Cord (Friction and Tension)
0
Why do scales measure normal force not weight?
7
Can kinetic and static friction act at the same time for this object rotating inside an accelerating cylinder?
0
How the ladder will slip if the wall and ground were to be smooth?
4
Why is the normal contact force horizontal on an inclined ladder?