Getting the relativistic inner product of Siegel's book

Last time I was discussing with a physicist about quantum field theory and how in the firsts chapters of textbooks it is often regarded that the Klein-Gordon equation does not have a positive definite inner product/probability density. He told me that he had seen a book that obtains a positive probability density. The author just change the sign with a factor $\epsilon(p^0)$ but I cannot understand what he is doing. The book is Fields by Warren Siegel https://arxiv.org/abs/hep-th/9912205 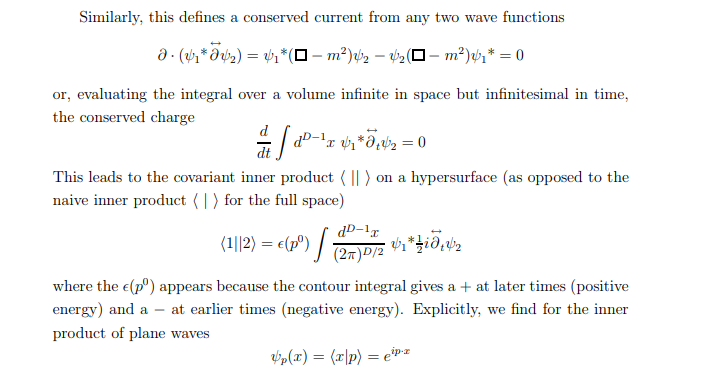 where the $\epsilon(p^0)$ appears because the contour integral gives a + at later times (positive energy) and a − at earlier times (negative energy).

Could someone help out with an explanation of why there is a contour integral producing a $\epsilon(p^0)$ factor?

"contour" should have been "boundary". (Explanation of time vs. energy in previous subsection.) Just fixed in v4:

Not the answer you're looking for? Browse other questions tagged quantum-mechanics wavefunction klein-gordon-equation or ask your own question.

18
single-particle wavepackets in QFT and position measurement
4
wave functions of Klein Gordon particles
14
Klein paradox for bosons and fermions
15
How to obtain the explicit form of Green's function of the Klein-Gordon equation?
5
Problems of Klein Gordon equation
0
Klein-Gordon Inner Product from Greiner's book doubt
5
Why can you deform the contour in the integral expression for the Klein-Gordon propagator to get the Euclidean propagator?
1
Was Dirac's discovery of the Dirac equation by requiring a positive-definite probability density $j^0$ an unjustified coincidence?