Determining the direction of a force with a dynamometer

I'm taking what is usually called "freshman's" mechanics course, and I'm basically trying to understand how forces are measured and determined. Starting with the definition of the procedure for measuring a force (basically, the construction of a spring-based dynamometer), and after the statements of the Galilei's principles of relativity and the definition of the inertial reference frames, I find in my textbook the description of an "experiment" for determining the well known relation between force and acceleration, carried on a smooth inclined plane. Using a dynamometer, we can, by simple observations, conclude that the force measured in the tangent direction to the plane is proportional to a constant number $p$ multiplied by the $\sin$ of the angle $\alpha$. 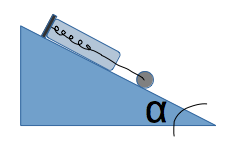 The thing that I don't get is the following sentence:

"In such conditions (smooth inclined plane), it's simple to verify, using the dynamometer, that the resultant of the forces, $\mathbf f$, is tanget to the plane."

How does who wrote this concluded that the resultant is tangent to the plane, and so by putting the dynamometer exactly in such a position as in the figure, we are measuring the vector sum of all the forces acting on the object (the gray ball)?

[We can obviously say that there is the weight $\mathbf W$ acting on the ball, perpendicular to the floor, and that by taking the components of $\mathbf W$ the one that is normal to the plane is canceled by the reaction of the plane itself, making the tangent projection our resultant, but the book never saw a word about the reaction force of the plane (but there is instead a description of what is meant by equilibrium of forces: a point is in an state of equilibrium if there is no forces acting on him).]

p.s. Trying to generalize my question, i would ask (but this is less important): is there a way to determine the direction of a force by using a spring-scale/dynamometer?

How does who wrote this concluded that the resultant is tangent to the plane, and so by putting the dynamometer exactly in such a position as in the figure, we are measuring the vector sum of all the forces acting on the object (the gray ball)?

is there a way to determine the direction of a force by using a spring-scale/dynamometer?

If a net force acting on the ball in a particular direction is not zero, it could be measured by a dynamometer pulling in the opposite direction just enough to stop the ball from accelerating.

If the ball does not accelerate in particular direction in the first place, we already know that the net force acting on the ball in this direction is zero.

So, if we have concluded, based on the observations, logic or by other means that the only net force acting on the ball is directed along the plane, it should be sufficient to measure the force in that direction and that measurement would give us the correct answer.

If we did not know which way the ball would accelerate, we could determine it experimentally, for instance, by trying different directions and see which one would not cause the dynamometer to rotate or compress.

0
Nonuniform circular motion
1
Centripetal force and circular motion
0
What is going on in the system? How are the formulas $mg \sin(x)$ and $mg \cos(x)$ derived?
1
Normal Force in Circular Motion
1
How do you tell whether a force acting on an inclined plane is going up or down in its perpendicular component to the plane?
43
What will happen to a ball kept on a frictionless inclined plane?
4
Reaction force exerted by pulley's support