In a paper were there was a section addressing Cavendish's experiment on concentric conducting shells which was basically the following : Two conducting spherical shells were put together (like the Russian doll) and a conducting link was connecting these two spheres , a charge was put on the outermost sphere , then we cut the link with silk a a silk thread ,take off the outermost, and see if the inner one had any electrical charge on it , the experiment showed that indeed it doesn't contain any charge . Then the author stated that this was a consequence of the inverse square law , and that if the electric field didn't follow this very law , then upon putting charges on the outermost sphere charges would migrate through the conducting link to the smaller sphere and it would have a charge on it . How did the author deduce this conclusion ? Why ,if the electric field didn't have the inverse square behavior , the charges would migrate to the smaller sphere ? 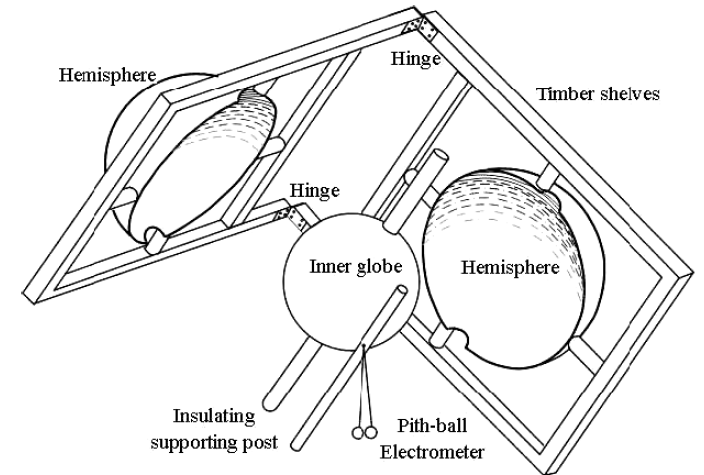 How did the author deduce this conclusion?

The inverse square law could be used to prove that the field inside a conductive hollow charged sphere is zero. It goes like this:

For any given point inside a conductive hollow charged sphere, the fields produced by patches of charge, subtending the equal solid angles on the opposite sides of the sphere, will cancel each other, because the charge magnitudes of the patches will be proportional to the square of their distances to the point of interest, while their fields will be inversely proportional to the square of the same distances.

Why, if the electric field didn't have the inverse square behavior, the charges would migrate to the smaller sphere?

The inverse square law is pretty fundamental, so there is no reliable way to tell what exactly would happen, if it did not hold, but, ignoring that for the purpose of the discussion, this would, at least, mean that the proof above would not work.

That does not automatically mean though that the charges would move from the large sphere to the small sphere.

In fact, we can always argue that, as long as the charges repel each other, they should distribute themselves over the outer surface of the large sphere, because this is most favorable distribution from the potential energy standpoint, and, therefore there won't be any charges on the small sphere inside, even with a conducting link connecting the spheres.

Not the answer you're looking for? Browse other questions tagged electrostatics gauss-law coulombs-law or ask your own question.

1
Conducting surface inside conducting surface
2
Laplace equation vs Gauss theorem
4
Why are there no charges inside a conducting sphere?
1
Spherical conducting shells behaviour
0
Modified Coulomb's law (hypothetical) and conductor
5
What is the mathematical reasoning behind the inverse square law of two charges?
1
Why is there electric field inside conductor in between shells if inner shell is charged?
0
Concentric Conducting Spheres and Gauss's Law
0
'Generalized' Universal Gravitation & Coulomb's Law?
0
How does charge redistribution occur?