Sonic Boom in Aircraft and Spacecraft

A while ago, I thought I got it, as there’s a start and finish point to every vehicle.

But is that it?

I already knew that condensation on wingtips and tail fins is caused by localised hypersonar and the pressure induced by the shockwave.

I researched a few articles and watched a few flights (not like I ever need an excuse! 😁), but still don’t understand why it isn’t a smooth lengthwise transition once the first shock has been achieved.

Any explanations most welcome, with thanks in advance!

PPS Or where it generally happens either, apparently.

One clarification here is that a sonic boom is produced, continuously, when an object moves at speeds exceeding the speed of sound - not just "on breaking the sound barrier".

The N-shaped graph below (copied from this Wikipedia article), referred to as an N-wave, is a pressure profile characteristic for a double boom. 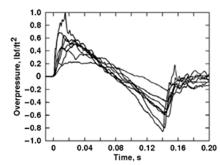 As mentioned earlier, these shock waves or wavefronts, closely following each other, are continuous (making up a cone behind a supersonic aircraft), but, for an observer at a given location, they will appear as two booms in a quick succession.

You will notice that there are multiple places where the index of refraction changes. This is because each location with a different cross-section generates its own density wave (some of which generate shock waves). The larger the cross-sectional change, the stronger the density wave. Thus, the nose and tail tend to generate the largest density waves, which can lead to shocks, if the object is supersonic.

Not the answer you're looking for? Browse other questions tagged thermodynamics fluid-dynamics pressure aircraft shock-waves or ask your own question.

3
Physical reasoning behind hearing a single shock
2
Density gradient in a shock wave of Supersonic Aircraft?
2
How is a shock wave a wave?
2
How do you explain the formation of shockwave on the wing surface during near sonic flight?
0
Why an aircraft or a ship produce pressure waves both in front and behind them?