At an atomic level, what happens when you connect two batteries in series so that their voltages are added?

I can't for the life of me figure this out. I feel like i'm missing some crucial detail about how batteries work.

As far as I've studied, this is what happens:

Is it because there is now two times more free electrons at the negative end of Battery A? And thus the difference between this end and Battery B is two times the normal?

I don't care much about the differences between each battery. If possible, pick a battery type you prefer or just talk about batteries in general (characteristics shared by all batteries).

Chemistry and Physics of Batteries in Series

What happens at the atomic level inside a cell when putting two batteries in series?

Characteristics of a single cell vs. two cells in series: (i.e., compare the voltage, current, $E$ field, stored energy, power, charge, and operating time in a circuit with the same resistive load.):

What force drives current through the electrolyte and conductor between the cells in series?

Conservation of Charge: The above single battery contains $10\ \mathrm{Ah}$ of charge, which equals $36\,000\ \mathrm C$. This is the total amount of charge that the battery can deliver as current. Batteries in series, both deplete their electron stores at the same time because all current flows through both batteries. In a closed circuit, at the anode, the reactants react and generate excess electrons. At the cathode, the reactants react with electrons to create products. This proceeds spontaneously and generates a state of electron deficiency at the cathode. The reaction cannot proceed without an outside source of electrons. When electrons conduct from the anode to the cathode, they satisfy the cathode's need for electrons, allowing the cathode reaction to proceed as fast as the electrons are supplied (with limits at upper limits that compete with the maximum reaction rate). When all the reactants at the anode or cathode have reacted to become products is spent, as the battery can no longer supply electrons to, or accept electrons from, the load. The increased current from a series battery source depletes the battery's charge-store twice as fast. The benefit of a higher voltage is a hotter resistor, brighter incandescent lamp, faster DC motor...

Conservation of Energy The total energy available to deliver by cells in series is the sum of the stored energy of the individual cells. As per the above examples: a single cell with $10\ \mathrm{Ah}$ of charge has $2.05\ \mathrm V\times10\ \mathrm{Ah}=20.5\ \mathrm{Wh}$ of stored electrical potential energy. Two identical cells in series have $41\ \mathrm{Wh}$ of stored electrical potential energy. Comparing the two circuits: a series battery doubles the voltage and current, resulting in 4 times the power consumption. Thus, even though a circuit with two cells in series holds two times the stored energy, the power consumption increases by four times, resulting in half the battery life. Conversion into any other form of energy satisfies the principle of energy conservation.

Battery terminal reactions: In the Lead-Acid battery, before reaction, energy is stored as potential energy by the charge attraction between the chemical reactants at each of the terminals.

Forces acting inside series cells: Placing two lead-acid cells in series doubles the voltage, and hence doubles the current across the load. That same current will pass through the conductor between the two cells in series, and the ions in the electrolyte of both cells will likewise conduct charge at the same rate. All of the cathodes accept electrons to complete the $\mathrm{PbO_2+SO_4^{2-}+2e^-+4H^+\toPbSO_4+2H_2O}$ reaction. And, all the anodes generate electrons in the $\mathrm{Pb+SO_4^{2-}\toPbSO_4+2e^-}$ reaction.

One way to think of this is as follows: for your two-battery system with the batteries in series, the positive terminal of battery "A" doesn't know or care what voltage the negative terminal of battery "B" is presenting to it. All battery "A" is going to do is pull electrons out of its positive terminal, lift them to a potential that is N volts greater than this (where N is the battery's rated voltage) and present them to its negative terminal. In practice, this means that the voltages of batteries in series are linearly additive.

Think in a classic Lead-Acid battery. When fully charged you have lead in the negative plate, and lead dioxide in the positive one. In both plates at start you have the usual amount of electrons (82 e per Pb atom in the negative, and 98 per PbO2 molecule).

But they are submerged in a aqueous solution of sulfuric acid, given the possibility to the following redox reaction:

As you can see, for this hemireacctions occur, you have to do take the electrons in the anode and put an equivalent amount in the cathode. It does not work if you do just one, because you need equilibrate charge and matter: An H2SO40 transforms into H+ and HSO4-, you can't have one without the the other (nor have positive without negative, neither transform a complete molecule 98 g of H2SO4 into 1 g of H+.

Edit 3/8: Someone asks "So if you connect two, do you get a neutral state in the middle?". Initially, no.

So, when connected, the carges are going to start neutralising as the electrons flow through the circuit and both hemireactions happen. And that neutralisation is going to happen in all four electrodes, discharging the batteries; because some hemireaction happens in all four electrodes. When the neutralisation is complete, the batteries are completely discharged.

Consider first two charged capacitors which are connected in series.

So what about ideal cells connected in series? 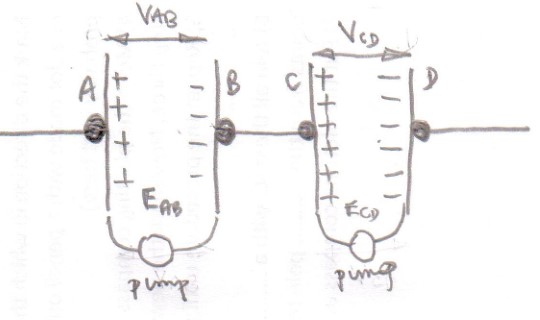 If effect cells have two plates which include the terminals.
These terminals/plates get charged up by an electrochemical process which can be thought of a charge pump (sorry about the water analogy).
Initially the plates terminals are uncharged and the charge pump moves charges from one terminal to the other terminal making one terminal having a net positive charge and the other terminal having a net negative charge.
The net charges on the terminals produce an electric field within the cell which opposes the pumping of charges from one terminal to the other by the charge pump (electrochemical process).
Eventually that electric field is enough to stop the migration of charges between the two terminals.
Each cell has a certain potential difference across its terminals and the addition of these potential differences is the same as for the example with capacitors.

So what is different about the cells as compared with the capacitors.
The key difference is that as soon as the terminals of a cell are connected together with a conductor charges will flow from one terminal to the other in the external circuit.
The reduction in charge on the terminals would result in a reduction in the electric field between the terminals but that electric field is no longer sufficiently strong to stop the charge pump pumping charges causing a migration of charges between the two plates within the cell.
The charge pump moves charges within the cell to compensate for those charges which flowed from one terminal to the other terminal via the external conducting circuit.
In effect the charge pump maintains the potential difference across the terminals whereas with a capacitor there is no mechanism for maintaining the amount of charge stored on the plates.

The removal of charges from terminals $D$ and $A$ would result in a migration of charges between terminals $C$ and $B$ ie an electric current flows between the two cells.

Discharge cycle:
Because of electrochemical processes, a battery develops an electric potential difference (voltage) between its electrodes. When you connect two such batteries in series, each battery maintains its individual potential difference (its voltage). When the circuit is completed, by connecting a load between the positive electrode of the first battery and the negative electrode of the second battery, a current, determined by the sum of the voltage of the two batteries (2x) divided by the load resistance added to the internal resistance of the batteries (Rl + 2Ri), flows. This process continues until the batteries are discharged.

Not the answer you're looking for? Browse other questions tagged electromagnetism electrons voltage batteries electrochemistry or ask your own question.

0
Why is voltage added when batteries are connected in series but not in parallel?

11
Why is there no current flow when I connect two opposite terminals of two separate batteries?
0
Why can't I series 5 D Cell Batteries to achieve 7.4 volts?
0
Can someone break down what exactly happens in this situation?
1
Why can't we add the emf of two batteries in a parallel circuit?
1
How does the electrochemical potential within a battery work at the level of basic E&M?
2
In a new unconnected battery, has a chemical reaction already occurred to cause excess electrons on anode end?
0
How does the voltage affect current?
19
Why doesn't the voltage increase when batteries are connected in parallel?